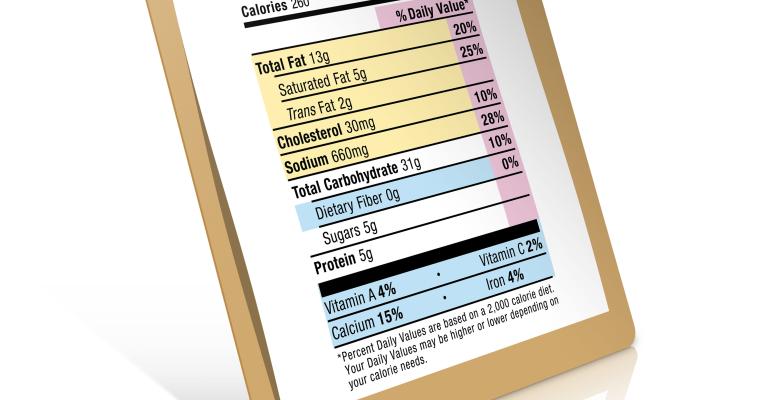 Nutrition facts
Covering everything from artificial colours and preservatives, to common allergens like gluten and lactose, the drive toward clean label ingredient lists has become the norm. But do consumers know what clean label is?

The clean label trend has seen food companies scrambling to reject ingredients that consumers say they don’t like, even when there is little or no evidence that alternatives are safer or healthier. But some companies claim that educating consumers about the purpose of certain food ingredients and processes could be an effective alternative.

Covering everything from artificial colours and preservatives, to common allergens like gluten and lactose, the drive toward clean label ingredient lists has become the norm. The reason is clear: 77% of European consumers consider the ingredient list to be the most important factor when buying food, compared to 53% who say the brand is more important, according to an Ingredion survey of more than 2800 shoppers.

However, despite what they say, few consumers actually read through the ingredients, says Michael Siegrist, Professor of Consumer Behaviour at ETH Zurich. They may be put off by a long ingredient list, but more often shoppers’ purchasing decisions are influenced by simple cues about whether a food is healthy or natural.

“There is a very limited segment of consumers that are really reading labels to make decisions,” he said. “It’s very rare that people are going through the whole list of ingredients. At the end of the day it’s more important that the consumer has a positive effect evoked by the food product…If you have food additives perceived as natural, it may have a more positive impact on the food product.”

However, a handful of companies have taken a different path, instead explaining the function of particular ingredients or processes. Advocates of this approach suggest reformulation to simplify ingredient lists actually helps perpetuate the myths around food that many consumers believe. In other words, removing ingredients that consumers have deemed ‘unclean’ serves to validate that verdict.

Sophie Hieke, Head of Consumer Science at the European Food Information Council (EUFIC), explained that in a recent study, even very different free-from claims, such as gluten-free, palm-oil-free, GMO-free, or lactose-free, led a majority of consumers to believe that a product was healthier. She suggests this may be because consumers assume that a company would not remove a positive component from food.

“We thought it was quite surprising that it was for every one of those ingredients,” she said. “It has started to become a discussion. The question is, are manufacturers shooting themselves in the foot by labelling products ‘natural’? Does this mean that products that aren’t labelled ‘natural’ are less healthy?”

US brand Juice So Good, for example, uses high pressure processing (HPP) to deactivate bacteria and retain more of the nutrients in its drinks. However, the technology is unfamiliar to most consumers, so the company uses humour to explain it, saying,

“We like to call it the Minnesota bear hug. This hug reduces the bacteria in the bottle and makes it safe to drink.”

The same thing is going on in ingredients, as some companies choose to explain that ascorbic acid, for example, is another name for vitamin C, and mention on the package that its purpose is to extend shelf life. Other manufacturers get around any controversy associated with E numbers by referring to them with their full name – ‘pectin’ instead of E440, for example.

Companies that talk about processing and ingredients may use the packaging itself to do so, but they also use their websites and apps to provide consumers with information.

What’s missing, however, is research into whether such explanations make a positive difference to Europeans’ purchasing decisions. In the United States, an organisation called Label Insight found that 64% of Americans are willing to switch brands if they find one with ingredients they understand better. Six in ten consumers said they trusted a brand less if they didn’t recognise some of the ingredients – but that trust can be rebuilt. Encouragingly, if manufacturers provide easy-to-understand definitions for the ingredients in their products, 84% of those surveyed said they would have more trust in food companies.

“One of the main themes that’s being spoken about is how consumer trust can be regained because it seems to have been lost over the past couple of decades,” Hieke added. “One of the things that seems to keep popping up is transparency and consistency. We often see there are misperceptions that are quite strong…That would be a big driver for why some companies have tried to go the transparent route.”