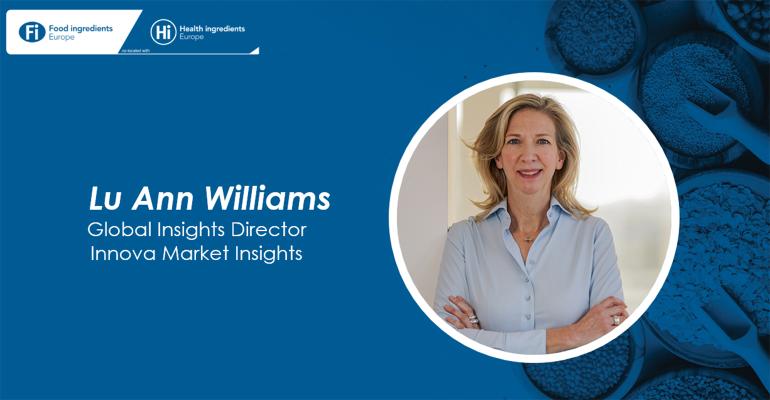 The health of the planet has now surpassed personal health as consumers’ biggest global concern, according to Innova Market Insights, which recently launched its Top Ten Trends for 2022.

Based on consumer research and global surveys conducted across 11 countries, the trend predictions offer food and drink manufacturers insights into the issues that will drive and shape consumer choices throughout 2022.

“Sustainability is very much on the agenda, and even if it’s not the number one purchase driver for consumers, it might be the tie-breaker,” said Lu Ann Williams, Global Insights Director at Innova. “Consumers are aspirational, so it’s definitely going to be on people’s minds more and more.”

“Sustainability is more and more a consumer issue. Instead of making some big general proclamation about their credentials, brands now have to [do] something more understandable in terms of measurements or the social impact.”

Innova’s second big trend for 2022 is the evolution of the plant-based category. According to Williams, plant-based products are no longer just about mimicking meat or dairy, but instead represent a whole platform for innovation with expanding sub-categories and increased premiumisation.

The past year has seen a diverse range of product launches from vegan salmon in Brazil to a range of plant-based seafood in Asia by Omnipork, for instance, and Innova has tracked a 59% increase in new plant-based products that also carry a premium or indulgence claim over the past year.

“We see now top chefs offering vegan menus, we see whole muscle foods creep onto the agenda with more plant-based steaks or sushi, and higher quality [products]. This is because, still, one-third of consumers across the 11 countries we surveyed said they don’t want to buy 100% plant-based products because of poor taste and texture. There is still a massive opportunity there.”

Major shifts in the industry

Sustainability and plant-based represent “major shifts in the industry”, according to Williams, and will at some point cease to be trends.

“At some point, sustainability will go the way of clean label. We talked about clean label for 15 years and, for the past five years, we’ve been saying, ‘it’s not a trend anymore, it’s that the rules have been rewritten’. I think we’re definitely going to see that with sustainability.”

In 2022, food brands may also begin to make more diverse claims around sustainability, such as using regenerative farming practices or carbon neutral production, while plant-based will become increasingly embedded into people’s mindset.

“Meat is not going away – meat consumption actually went up in the past year – but I think a larger proportion of the population will understand that there is probably a better balance to be had by consuming more plant-based,” said Williams.

The Voice of the Consumer

Innova’s fifth defining trend for 2022 – the voice of the consumer – ties in with demands for sustainable and plant-based products. People are seeking out food and drink brands that align with their political, social and ethical beliefs and won’t hesitate to shop around to find them, or even co-create products that meet these needs.

Seventy-five percent of consumers surveyed said companies should listen to them more when developing their products or strategies.

“Today, consumers don’t want to be told what to do or be educated; it has to be a conversation,” Williams said.

This approach can be applied to ‘light-hearted’ issues, such as asking consumers to vote for their favourite flavour for instance, but also to weightier topics.

Nestlé’s Beneath the Surface initiative is an interesting example of this, Williams said. The Swiss company, which failed to meet its pledge to source only deforestation-free palm oil by 2020, directly asked consumers for their opinion about its supply chain, posing questions such as ‘Should we stop buying palm oil from small-scale farmers who contribute to deforestation?’

“They turned the whole controversy around palm oil into a short educational film and questionnaire to help consumers understand how complicated it is,” said Williams. “Everybody is always looking for really simple solutions to complex problems, and Nestlé did a good job of helping consumers to understand why it’s more complex than they think. There should be a back-and-forth between brands and their consumers.”