Corporates must engage with younger generations to survive [Interview] 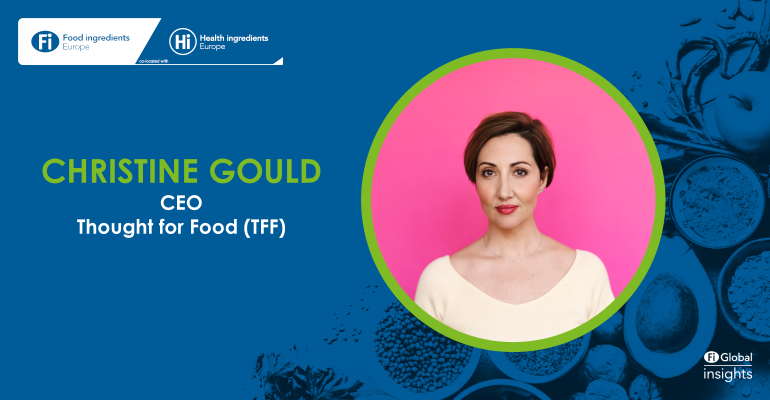 Engaging with younger generations is essential to create a sustainable, resilient food system – and crucial for corporate survival, according to Thought for Food CEO Christine Gould. “Young people aren’t cute kids. They are a strategic force of innovation,” she says.

Christine is founder and CEO of Thought for Food (TFF), a non-profit organisation that works to make the food and farming system more sustainable and inclusive by empowering younger generations of innovators.

It runs the TFF Challenge, an agri-food-tech innovation programme that, in 2022, brought together more than 3,000 people from 139 countries to champion creative and practical solutions to one of the most important questions our planet faces: How do we feed 10 billion people in a sustainable way as climate change intensifies?

As a current advisor to the Committee for the UN Food Systems Summit and ex-head of innovation at genetic modification (GM) giant Syngenta, her professional experience spans public policy, startups, and corporates.

Christine Gould will be speaking in-person at the Lunch and Learn session, held during Fi Europe 2022 in Paris. Her presentation will focus on the most important next-generation solutions the food industry should be harnessing, from biotech and digital innovation to circular economy and open business models. We caught up with her ahead of the event to find out more.

What are the benefits for food industry corporations in engaging with younger generations?

“My experience of the corporate world was a zero-sum game. I worked in big agri-business where it was ‘GMOs or no GMOs’; that was the only argument and people became very defensive. But the next generation [has] what we call a multi-spectral perspective.

“[...] There is a whole new way to embrace the nuance and explore new possibilities. What if we could use GMO techniques but in regenerative ways? What if we could combine biochar with artificial intelligence and machine learning? Then you have fewer ‘I win, you lose’ scenarios, you have more win-win scenarios. And that is a piece of practical advice: big corporations [should] look for win-wins and flip dilemmas into opportunities.

“I really think one of the ways to do that is to engage with the younger generation actively and proactively. At Thought for Food, we do focus groups where we bring in leaders of the next generation and help them think through their strategies. There are learnings to be had by engaging with the next generation, but not in a tokenistic way.

“I sometimes personally get bothered when people say that we’re a youth organisation because then we get dismissed as being cute kids. But we are a strategic force of innovation. The world is changing around us and if [corporates] want to stay a leader as this change is happening, we can help [them] work with the new operating system, instead of getting disrupted by it.”

How can corporates make this a reality within their business models?

“It needs to be about inter-generational collaboration. But that’s hard to do because the older you get, the more entrenched in your ways you become. So, how do we equip the older generations to work with younger generations? I often joke that my organisation is like a dongle that [...] makes a Mac and PC work together. We are a dongle between the new and the existing so that they can work together and understand each other.

“I have been on the corporate side and now I’m working with the next-generation startup side. I understand their languages, their mindsets and I help to bridge them so they can work together more effectively.

Current challenges such as climate change are incredibly daunting. Do you feel confident that younger generations have what it takes to overcome them?

“We have the solutions and I believe we have the will, but we are not giving [young people] the space to emerge. We have what it takes to solve [climate change] but we’re making it such a battlefield that young people are burning out and we’re not giving them the investment they need to go forward. So, now we have many young people giving up and resigning to this.

“But I also hear a lot from young people, ‘Stop telling us it’s in our hands!’. It’s so daunting to be constantly told, ‘It’s up to you’ – especially when they aren’t being given the opportunity, means and space required.”

Do you believe that younger generations of Millennials, Generation Z and Generation Alpha could help create a corporate world that is more inclusive of women and minorities?

“Many experts believe that this new generation, particularly Gen Zs but also the emerging generation Alpha, is intersectional by nature. They don’t see siloes.

“[...] Statistics show the next generation is the most diverse as well. America is going to be majority Hispanic, speaking lots of languages. Because this change is happening so fast and it’s a paradigm shift, there is a regression to nationalism and old ways, as we’re seeing right now.

“I feel like this is the last fight for power, the last chance for those people of a different era to hold on to something. But it’s going to be just a blip.

“[...] Regardless of what you think of crypto and the hype that surrounds it, there is a phenomenon of decentralisation that is being powered by nodes of collaboration and innovators coming together. That will make the regression that we’re feeling right now short-lived.”