Challenges and opportunities for the European F&B industry 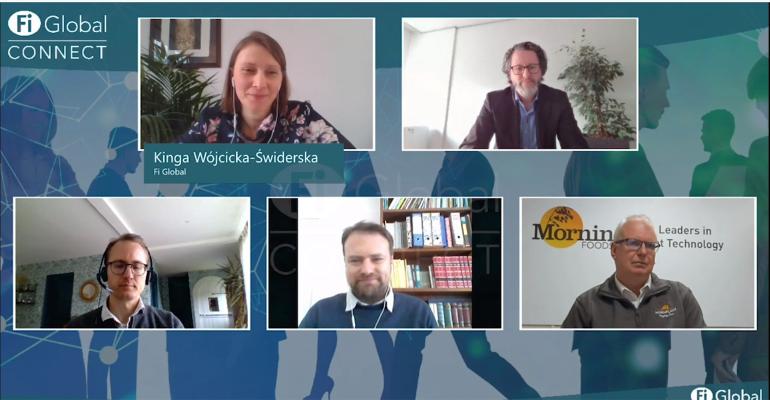 Despite being the biggest sector in both the UK and EU, the food and beverage industry has of recent faced various challenges in the wake of Covid-19, Brexit and changing global trade relations.

As part of Fi Global: Regions in the Spotlight the live panel discussion brought together experts from the dairy, flavour, sports nutrition and food safety, science, and regulatory sides to provide insight into the current situation and future trajectory of the European F&B market.

Focussing on the specificities of each sector, the discussion paid particular attention to the changes brought about by the Covid-19 pandemic and the UK’s departure from the EU. The subjects of supply chain adaptation, the drive for sustainability, and policy and regulatory initiatives such as the European Green Deal were among the notable points of conversation.

Covid-19 learnings for the F&B industry

The Covid-19 pandemic has brought multiple, novel challenges to the global F&B industry, panic buying and stockpiling, supply chain disruptions and new requirements for more stringent lab hygiene practises to name but few. Despite the impressive resilience shown by the industry to react and adapt quickly to such challenges, the effects of the pandemic are apparent in all sectors.

In the flavour sector, Dr Alexander Mohr, Executive Director, European Flavour Association (EFFA), addressed the ability of larger companies to adjust more effortlessly than smaller businesses and cited the unpredictability of the situation and divergence in approaches to planning security as key issues. A more unified and harmonised approach to food security across the EU, UK and further afield is a main challenge that the industry would benefit from tackling.

Despite the closure of the food service trade in the early stages of the crisis, the dairy industry experienced a shift but no overall reduction in consumption, partly due to increased retail sales. Jukka Likitalo, Secretary General, European Association of Dairy Trade (Eucolait), noted how border closures had initially caused issues in the European market, however this improved with the EU’s implementation of Green Lanes.

In the sports nutrition space, the limits on sporting activities and closure of facilities led to an immediate decline in sales, which was counteracted somewhat by the increase in food supplement sales, such as Vitamin D. According to Luca Bucchini, Vice-Chair, European Specialist Sports Nutrition Alliance (ESSNA),

“[the sector’s] main priority is to get people back exercising as soon as is safely possible”.

From a food safety and security perspective, Derek Croucher, Technical Director, Morning Foods, IFST Fellow, FDF Food Safety & Scientific Steering Group, noted how the challenge to implement changes in locations where travel ceased had led to a rise in remote audits and technology developments in this realm. To avoid these same issues in future, he emphasized the need to ensure the agility of operations and build lean elements into the supply chain, making use of new technologies.

Aside from the pandemic, the UK’s departure from the EU on 31 January 2020 also significantly impacted the F&B industry. Great Britain’s new entry controls on imports and the divergence in laws and regulations applying across the EU, Northern Ireland and Great Britain are just two of the consequences of Brexit which have caused difficulties for businesses across Europe.

Although it may still be too early to see the full extent of these changes, Likitalo warned that due to the fragmentation of fully integrated supply chains, trade across Europe may never return to its pre-Brexit level. According to Croucher, vagaries in interpretation of laws between EU member states and a lack of clear guidance regarding regulation has caused long-term structural issues, which will limit cross-national trade.

For sports nutrition products, Bucchini commented that the immediate impact of Brexit had been less severe than that of the pandemic and was hopeful that positive changes made in the UK could in future also be replicated at EU level.

Looking at trends in the current and future F&B landscape, sustainability emerged as a clear focal point common across sectors. The environmental performance of many F&B businesses in the EU is good compared globally, with many companies having recently announced ambitious targets such as CO2 neutrality by 2030.

In the dairy space, Likitalo referred to the rise in consumer and regulatory demands for improved animal welfare standards and more sustainable, lab-grown dairy products, notably those created through fermentation.

From a regulatory standpoint, Mohr emphasized the potential of policy makers to influence the market in future. The Farm to Fork initiative as part of the Green Deal has already set the trend of establishing more sustainable F&B systems, in which healthy products are considered the consumers’ go-to.

For Bucchini, the focus is on communicating sustainable goals to consumers, ensuring the safety and efficacy of products and ingredients, and developing policy particularly regarding nutrient profiles for products.

Croucher highlighted the growing alignment of consumer trends and policies, referring to the rising momentum around the UK’s sugar tax on soft drinks and wider government strategy to reduce obesity. He also spoke of the need to monitor and act upon food safety issues, such as the trade of unregistered and unregulated products on social media channels.

Key challenges and opportunities for the future

For Mohr, the European Green Deal and Farm to Fork initiatives present significant opportunities for the future of the flavour sector and F&B industry in general. In terms of challenges, he commented that

“trade is becoming politicised to a scary level … now more than ever before there are greater risks attached to trade related issues.

“Trade associations are much more aware today than before and are coming together to address common issues,” Mohr said.

Likitalo expressed optimism for the future of dairy, predicting that demand from consumers and innovation from the industry will continue to grow over the next decade. Conversely, he said

“[a key challenge] lies in reducing the loss of biodiversity and stopping climate change, while ensuring food safety”.

“Regarding sports nutrition, the greatest opportunity lies with consumers,”

Bucchini noted, positive about the return of sports activities post-pandemic. For him and his sector, the biggest challenge, is having products which are considered nutritionally adequate by consumers and regulators alike. This may be achieved by developing policy around nutrient profiles and improving Nutri Score classifications for certain products in order to improve understanding of them, for example sport nutrition products which are often purposefully calorie rich.

In terms of trade, Croucher predicted that a UK divergence from EU regulations may lead to alignment with other international standards, potentially the Codex Alimentarius, creating new trading opportunities. Regarding sustainability and net-zero targets, he noted that

“the industry will have to start delivering actively on its sustainability agenda in the short term to deliver promises made for 2030, 40, 50 and beyond”. 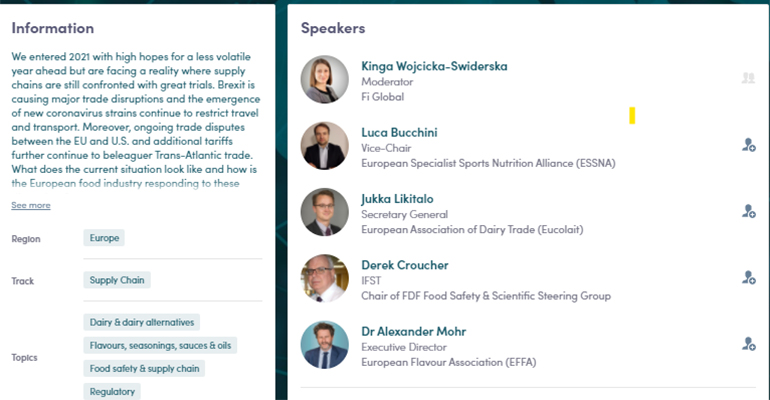 Alexander is the Executive Director of the EFFA, based in Brussels. Previously, he was the Secretary General of APEAL, the Association of European Producers of Steel Packaging, and head of the public affairs practice for the European container glass industry (FEVE).

With a EUR3.5 billion annual turnover, over 400 sites and 10,000 highly skilled workers across Europe, the EFFA is a B2B service supporting the flavour industry via activities including creating networks and alliances with European Associations, supporting a European-wide strategy on flavour issues and monitoring flavour-related EU legislation.

Jukka is the Secretary General of Eucolait and the treasurer and a member of the presidium of CELCAA, the European Liaison Committee for Agri-Food Trade.

Eucolait represents the interests of some 500 dairy trading businesses of varying sizes across the EU, acting as a platform for discussion and provider of information for European and global dairy businesses.

Luca is a vice-chair of the ESSNA and a director of EuroFIR, the non-profit food and food supplement composition organisation.

ESSNA is a trade association of 40+ members representing the sports nutrition industry. Their aims include achieving better compliance in the sector, educating the consumer, and promoting reputable sports nutrition brands in the media.

The IFST is an NGO professional membership body of over 2, 800 members supporting food science and technology professionals. The UK Food and Drink Federation (FDF) represents more than 800 F&B companies as a unified industry voice to governments, regulators, consumers, and the media.

Kinga is the senior content producer for a series of large-scale B2B exhibitions including Fi Global, Fi Europe and Fi North America. She is an experienced food expert and throughout her career has had experience in areas including product design, establishing strategic partnerships for R&D and formulating opinions in regulatory consultation processes on national and EU level.