India’s global role in the future of alternative proteins [Interview] 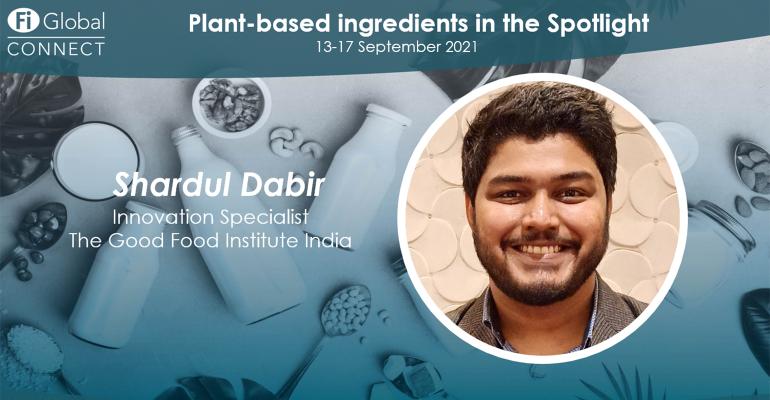 If India adapts its agricultural practices, supports the next generation of innovative food entrepreneurs and links up with national and international supply chains, then the country will likely play a critical role in feeding almost 10 billion people by 2050. This transformation also means that huge untapped business opportunities in the field of smart protein are emerging, as Shardul Dabir, Innovation Specialist at The Good Food Institute (GFI) India, explains.

Dabir is someone with an eye on the future. He is part of a GFI India team currently laying down a roadmap that will help India – and indeed the world – transition towards a more efficient, greener, and sustainable plant-based 'smart protein' agro-economy.

The inefficiencies of conventional agricultural practices, i.e. cycling calories through animals, has been shown to be wasteful and environmentally unsustainable. To ensure enough protein is produced for future populations without destroying the planet, alternative, or smart, sources of protein must be found.

“Our ultimate goal is to sustainably feed and take care of the protein needs of almost 10 billion people by 2050, one sixth of whom are going to be Indian,” says Dabir. “While the network of talent, investment, business, and policy support we have built up is beginning to mature, there’s still plenty of room for growth, which is very exciting.”

A subcontinent full of potential

India, like the rest of the world, has seen a rise in the demand for protein. Consumers are warming up to organic and healthy foods, but never without sacrificing taste. Creating sustainable alternatives which taste the same, or better yet, cost the same or less than conventional meat, eggs and dairy products is critical to ensure a sustainable future for all.

“From a consumption perspective, the country’s unique context is creating sustainable, affordable, and delicious alternative protein products for a country with 1.3bn people, 70 - 80% of whom are protein deficient,” says Dabir. “They want meat, eggs and dairy but can’t afford to eat these products daily or even weekly.”

Indians also closely follow international trends, and healthy alternative protein products are increasingly being targeted at early adopters in the cities. Once price parity and economies of scale come into play, Dabir is confident that a much larger smart protein market will open up.

From a production perspective, India is already one of the largest producers of many key agro-commodities, and is a leader in dairy production. Dabir points out that there is also an abundance of smart, English-speaking talent in food science and other domains along the alterative protein value chain.

“The relatively low cost of labour and manufacturing can also help India to become a manufacturing hub for protein concentrates, isolates and alternative protein end products,” he adds.

One often overlooked issue is seafood production. India, with one of the longest coastlines in the world, is well poised to play a role in exploiting plant-based, fermented, and cultivated seafood.

Things are beginning to happen. Numerous startups have been launched, while more and more multinationals are entering the alternative protein sector.

“This has enabled us to create a ‘GFIdeas India’ community, with thousands of partners along the supply chain,” says Dabir. “Here we have seen a much-needed shift amongst key entrepreneurs, investors and other stakeholders in their understanding of the need to create generation 2.0 products, which are superior bio-mimics of meat, eggs and dairy.”

Dabir stresses that the Indian alternative protein industry is still in a pre-competitive phase. Cultivated (cell-based) meat and fermentation technologies are still being explored. Nonetheless, some notable startups have emerged. These include Blue Tribe Foods, which is focused on next-generation plant-based meats, along with the likes of GoodDot Foods and Imagine Meats.

Large corporate players with multiple verticals are also driving the movement via their distribution networks, R&D capabilities and understanding of the opportunities in the smart protein sector.

“Many top manufacturers such as ADM, AAK, Kerry and Givaudan are working in India and have been investing strategically in plant-based companies,” says Dabir. “As we have always said at GFI, meat companies, with their established supply chains and insights into meat consumption, will be key players in this field.”

A good example of this is Allana, India's largest exporter of halal meat. Dabir notes that they were the first to import Beyond Meat to India through one of their subsidiaries.

“While these products are quite expensive due to duties, these imports will go a long way in educating investors, entrepreneurs and early adopter consumers,” he says.

Local business environments and complex supply chains can be difficult for international companies to navigate. Nonetheless, the sheer size of the consumer market, the increasing demand from affluent early adopters, and a vast wealth of protein sources ready to be tapped make India an attractive smart protein proposition. Some international players are collaborating with local food businesses to gain a toe hold.

“We are already seeing this happen,” says Dabir. “A key pillar of GFI India's strategy is indeed to facilitate bilateral and cross-country collaborations for businesses and scientists globally with their Indian counterparts.”