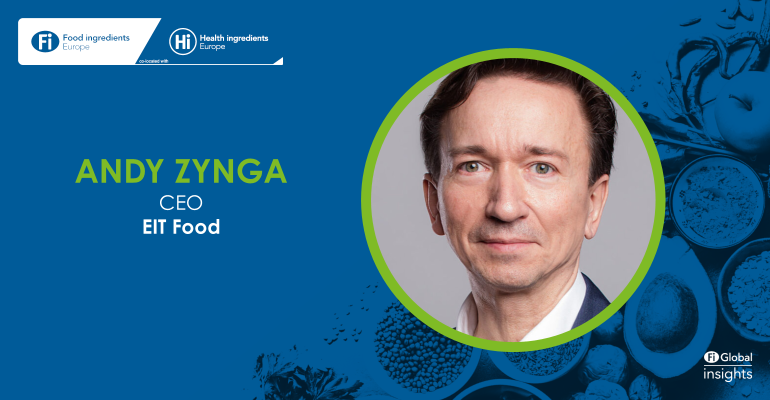 A significant amount of the world’s greenhouse gas emissions is caused by global food systems and there are only seven more harvests to 2030. “We don't have a lot of time to really make an impact,” says Andy Zynga, EIT Food CEO.

An EU body set up in 2008 to promote on food innovation, EIT Food’s mission is to transform how food is produced, distributed, and consumed across Europe. By working together with industry leaders, education, and research partners, EIT Food is helping to solve essential innovation challenges. We spoke to Andy Zynga, CEO of EIT Food, who will be speaking at this year’s Food Ingredients Europe, held in Paris from 6 – 8 December.

What do you believe is the most pressing challenge facing the food system right now?

“Looking at all the different challenges, there are many. I would say that climate change is certainly very high on the agenda, if not the most pressing one for the food system.

“[…] There are farmers here who fear that their harvest will come in [smaller quantities] than they had anticipated. And when we think about it, about climate change, there are only seven more harvests to 2030. We don't have a lot of time when you think about the cycles [and] to really make that impact that everybody wants. And indeed, we feel that innovation is key to this, as a society to say, let's innovate ourselves out of the crisis. The thing is one player cannot do it alone. It must be a collaborative effort.

“When you look at the pledges made by large food majors on climate action, the Ellen MacArthur Foundation found that only a handful of corporates have developed concrete plans to address those pledges. That's also a pressing challenge […] food majors have to really work on this.

“[…] And of course, the Farm to Fork strategy of the European Commission shows us some vision of how to get there. Some of the things that that need to be looked at [such as the] reduction of chemical fertilizers, more organic agriculture. But again, it requires a concerted effort by everyone now to really make it to the finish line with a good result for the environment.”

Primary production is an area you have previously described as in need of major innovation. What is the first step to making a meaningful change in this sector?

“We at EIT Food are part of a World Economic Forum LED initiative called the Carbon+ Farming Alliance. And, as part of it, we conducted a survey across farmers in Europe and the coverage of the survey represents about 75% of all the farmland in Europe.

“The first thing on farmers’ minds is the financial side of the agricultural business. When you try new techniques, there's always the latent risk of reduction in output, input cost and yield. And the second part is knowledge. What kind of techniques and technologies do we use? We feel that one of the ways out of this [is by] using the innovation route.

“We have a project called the Regenerative Agriculture Revolution [that establishes] test farms, so that startups can […] test their technologies. Some of the things that need to happen, which again, many farmers don't have much knowledge of, is to start with some immediate smart farming techniques. When you look at things like measuring soil health, how dry is the soil? How much irrigation does it really need? Does it really need as much fertiliser?

“That can already reduce the input cost because as you know, chemical fertilizers are currently sky high. Many are imported from Russia and so just by tweaking some of the things that the farmers are doing, I think they could already give themselves immediate relief.”

What are some areas of recent food innovation that have left you feeling optimistic?

“One area that enjoys continued growth [and has] high interest from the investment community is the alternative protein field. We call it here ‘protein diversity’ because we believe that meat – regular meat – will always be around. There are many people that enjoy the flavour of regular meat and want to eat farm raised cattle and farm raised pork but there are alternative proteins.

“We know how alternative proteins also can help to contribute to going towards the net zero system. There are a couple of examples of companies that are doing cellular meat, one of them is Aleph Farms from Israel and the other one is Mosa Meat from the Netherlands and – fun fact – the actor, Leonardo DiCaprio, has just invested in both of those.

“We believe that those are potentially good clean meat alternatives that are adhering to the principles of animal welfare because no animal needs to be slaughtered for it. One of the issues in it, and this again is where innovation comes in, is the fact that the growth medium in which those cells grow is extremely expensive.

“Another example is Solmeyeam, a company in Greece that's making algae-based omega assets and alternative proteins based on algae with a much smaller footprint than normally due to a patent that they have. Another one [is] a company called Sustainable Seafood Processing, [which] presented data that shows that one can improve the shelf life of seafood by a factor of two so they can go from 7 to 14 days and they used the example of gutted seabass.”