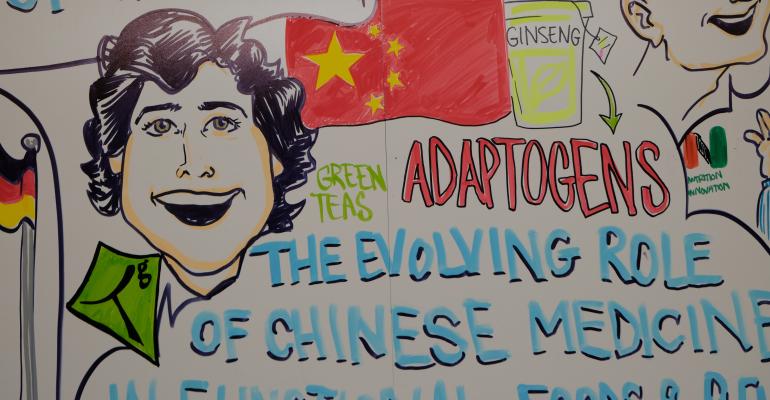 When it comes to developing beverage products with Asian market appeal, Sophia Nadur suggests it is best to tap into longer term trends.

Many western food and drink companies have their eye on Asian markets, but it is a fast-moving region where business is conducted very differently.

It takes a certain kind of entrepreneurial confidence to try and sell green tea to the Chinese, where tea has had an important cultural significance and a role in traditional medicine for centuries. It’s a confidence that Nadur has acquired during more than 20 years working in innovation and marketing for global industry giants like Coca-Cola, Mars and Unilever, before launching Tg Green Teas with her long-time friend Hua He on the UK market in 2015.

Having a Chinese business partner has been crucial to the company’s successful market entry there, she says, but there are steps that anyone can take to increase their chance of success in Asia.

“You have to be present. You have to attend shows and conferences, and no one works on a handshake,” Nadur said.

Last year, after a period of thorough market research, she went to the World Tea Expo intending to meet some of China’s biggest tea companies, and she struck it lucky with a company called ZheJiang Tea Group that was interested in an informal joint venture.

“We then had to meet several times because it is a long, long relationship,” she said. Company representatives came to London, and Hua and Nadur visited China in turn.

“I decided to sell them my expertise and over time they started to trust us and that allowed us to develop a joint venture without having too much on paper,” she said.

“A lot of it stemmed from that half-deliberate, half-chance meeting.” In return, Tg Green Teas received the help it needed to enter the market in Shanghai.

When it comes to developing products with Asian market appeal, Nadur suggests it is best to tap into longer term trends that underpin consumers’ general attitudes toward food and drink, rather than jumping on the latest ingredient or flavour fad. And of course every country and part of Asia is different.

Both jujube and osmanthus are already well-known ingredients in many parts of Southeast Asia, and the flavour of tea made from osmanthus flowers has been likened to peach or apricot.

China: Tradition, with a modern twist

In China, Tg’s positioning pays tribute to traditional Chinese wellness – and aims to refresh and modernise that image.

“A lot of people in the west think China is old fashioned. It’s not,” she said.

“…Green tea as a hot beverage is quite ubiquitous. Our point of difference is we offer an organic ethical alternative – and bundling it with traditional Chinese wellness as well. In China in particular there is something called Health 2030. The president said Chinese will become healthier with more preventative health care. One easy way is to go back to your roots and go back to traditional medicine, which dovetails perfectly with our message.”

However, the Chinese market has been more challenging for Tg’s iced tea range, which has to compete with younger consumers’ interest in established western soft drinks like Coca-Cola – and the cost of market entry is quite high.

Singapore, on the other hand, has potential as a gateway market to other parts of Southeast Asia and, like other parts of the region, it has experienced a rapid increase in the incidence of type 2 diabetes, making Tg Green Teas’ low sugar content an important selling point.

“The approach in Singapore is we provide a healthy soft drink,” she said.

“We talk up the British credentials, which is what matters in Singapore.”

She added: “The market in Asia moves at lightning pace. What is cool today will be gone tomorrow. If you are going after a fad you are never going to make it. You need to go after an underlying value of the target market.”

Specifically, many consumers are interested in ingredients thought to be beneficial for immunity that are rooted in Ayurveda and Chinese medicinal practices, such as turmeric, holy basil and ginseng, which are both flavourful and healthy.

Nadur says other current trends in the beverage sector include the rise of pre-packaged plant-based milk alternatives, and drinks for natural energy.

“It’s like oil in the engine rather than petrol in the petrol tank. It’s something that nourishes you from the roots up.”

Apart from pinpointing the best way to approach the market, other challenges include dealing with old world ingredient companies, which tend to have a longer delivery time than is necessary when working in fast-paced Asian markets, and heavy reliance on small shops and e-commerce.

“You don’t know that market,” she said.

“…Get to understand the culture of the market, which will help you to avoid some of the missteps that a lot of western companies are making.”