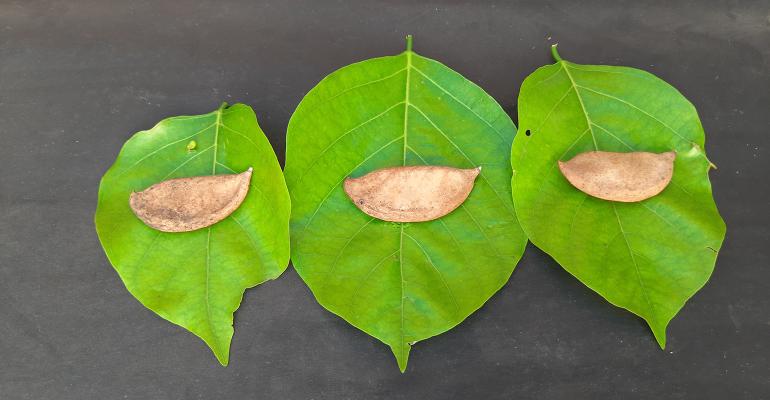 Novel processing techniques have opened the door to commercialising pongamia seeds for oil and protein – but there are compelling sustainability reasons to plant more pongamia trees, say researchers.

In addition to having a high carbon sequestration potential, which can help to mitigate the impact of climate change, pongamia trees are in the legume family and, like lentils and beans, fix nitrogen to the soil, improving soil health.

The trees are pest-resistant and require relatively small amounts of water in sub-tropical regions. They are also adapted to climate extremes, such as the annual monsoonal drought and flood cycles, and have a dense network of lateral roots that help control soil erosion.

The seeds of sustainable development

Indonesia’s Ministry of Forests and Environment has set an ambitious target to restore 14 million hectares of degraded land by 2030 as part of its national commitment to the United Nations Framework Convention on Climate Change (UNFCC), and has identified pongamia trees as a potential tool to do so.

According to Himlal Baral, a scientist at the Center for International Forestry Research (CIFOR) who co-authored a recently published study on pongamia’s potential in Indonesia, the trees are interesting to stakeholders across the value chain, from local communities to environmental policymakers, because they are a native, multipurpose species that can restore land and biodiversity as well as providing food, wood, fodder, medicine, fertilizer and biofuels. This makes them an important tool for sustainable development as well as sustainability.

“While the government’s ambitions might be primarily about restoration, local people’s interest is in trees that can give them some value or income,” Baral told the Global Landscapes Forum. Planting pongamia trees as part of a land restoration programme could “fulfill a whole lot of ambitions and address the interests of many different stakeholders – at government, community and international level – all in one go,” he added. 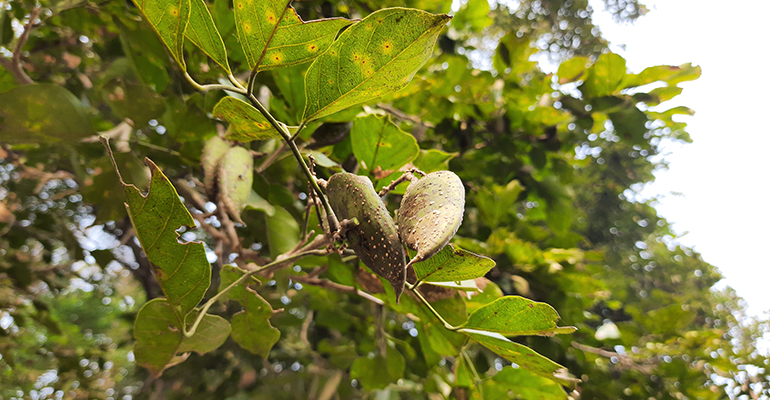 Traditionally, pongamia seeds have not been used for food due to their bitter taste, caused by flavonoids, and anti-nutritional factors. However, California-headquartered food and agriculture company Terviva has developed proprietary processing methods to remove the bitterness and low-level toxicity from pongamia seeds, thus paving the way for product development. It plans to open a facility in the US in 2022 to produce pongamia-based foods.

As a food ingredient, the seeds offer a number of functional attributes that make it attractive to food and drink manufacturers, says Terviva. The oil has a golden colour and buttery flavour and contains both saturated fats and omega-9 fatty acids, becoming semi-solid when stored at refrigerator temperatures. Pongamia protein, meanwhile, is soluble and contains all nine amino acids, with a respectable protein digestibility-corrected amino acid score (PDCAAS) of 0.85.

Terviva provides patented high-yielding trees to growers and has partnered with growers to cultivate thousands of acres of pongamia trees in Florida, Hawaii and Australia. It also buys wild harvested fair-trade beans from smallholders in India.

Cultivating an orchard of pongamia trees on idle agricultural land that is difficult to farm with other crops can capture 115 metric tons of carbon per acre over 30 years, ranking it among the most sustainable sources of edible oil and plant protein, according to Terviva.

In May this year, it raised $54 million in equity capital, in a financing round led by investors in sustainable food and agriculture, including the Astera Institute, Evans Properties, Trustbridge Partners, and the Jeremy and Hannelore Grantham Environmental Trust.

Feeding and healing the planet

Merijn Dols, global director of open innovation and the circular economy for food at Danone, said:

"We believe that healthy foods need a healthy planet with thriving ecosystems and strong, resilient social structures. This is why we are excited to team up with Terviva to co-develop important ingredients – edible protein and oil -- from the pongamia tree, while also rehabilitating the soil the tree grows in."

Naveen Sikka, founder and CEO of Terviva, said that pongamia-based ingredients can feed the planet and heal it at the same time.