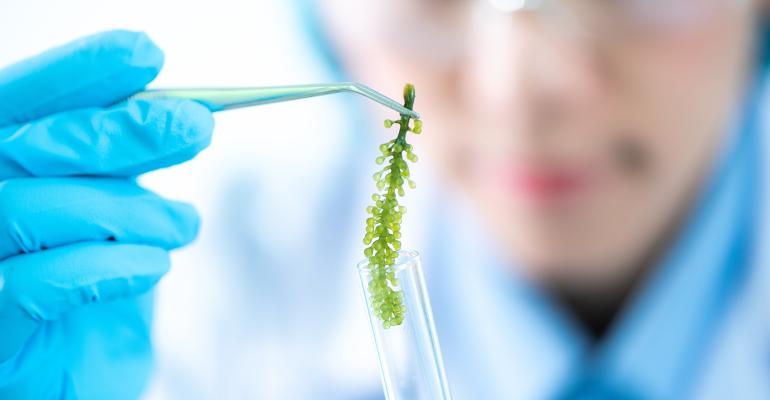 Microalgae have been hailed as superfood ingredients and the ultimate in sustainably sourced protein, and recent European novel foods approvals could open the door to broader use.

In Europe, the number of new product launches containing algae and seaweed ingredients has seen a surge in interest in recent years, doubling from 2015 to 2017, according to Mintel. Two-thirds of those products contained spirulina as a blue-green colouring, but now new ingredients are emerging. Chlorella ingredients, as well as those from kelp, wakame and nori, each are present in less than 1.5% of new algae-containing product launches – but the market for them is growing, particularly in meat, fish and egg products, which have seen more than 25% growth over the past five years.

In March 2021, Portuguese company Allmicroalgae gained European Food Safety Authority (EFSA) approval for two microalgae ingredients intended to replace milk and egg, tapping into growing demand for animal-free alternatives. According to the company, these new ingredients – white and yellow Chlorella vulgaris – stand out from other microalgae ingredients for their pale colour and mild taste. But they also have the properties that make microalgae appealing to the food industry more generally, including an enviable nutritional profile, with 35-40% protein and more than 20% fibre, as well as B vitamins, zinc, phosphorous and omega-3 fatty acids.

“There is positive interest from the food industry,” said Joana Laranjeira da Silva, Plant Manager at Allmicroalgae. “Our yellow and white microalgae variants deliver the full functional package of proteins, fibre and other valuable nutrients, while also promising environmental and sustainability benefits.”

Sustainability has been a major point of interest for food manufacturers looking at the promise of microalgae. They need no irrigation water, pesticides, fertilisers or agricultural land, and are extremely fast-growing. And as interest in sustainable, non-animal-derived proteins ramps up, microalgae compare favourably with plants as a source of protein, too. Chlorella, for instance, contains about twice as much protein as soy, and about eight times as much as rice. 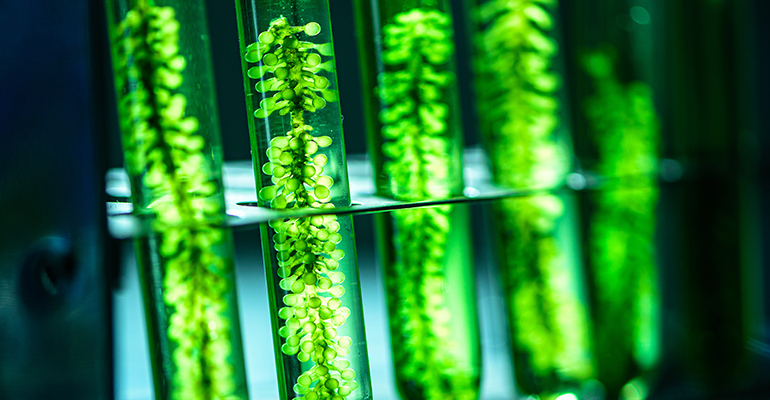 According to Allmicroalgae, the composition of its Chlorella ingredients also qualifies them for a range of EU health claims, relating to maintenance of blood cholesterol levels, normal vision and bone health, as well as reduction of tiredness, cell protection and immune system support.

“Such claims allow for product positionings in the general health and well-being sectors, cognitive and heart health categories, and also energy and sports supplement segments,” it said.

Allmicroalgae is just the latest company to enter the market. Some of the world’s biggest food companies are already exploring microalgae’s potential. Nestlé, for instance, partnered with Netherlands-based ingredients firm Corbion in 2019, aiming to develop microalgae ingredients rich in protein and micronutrients. According to Mintel, Corbion is the world leader in algae-related ingredient innovation.

According to Neha Srivastava, Patent Analyst at Mintel, “Algae is one of the most promising foods for the future: easy to cultivate, offering an abundance of protein and other nutrients, whilst maintaining biodiversity.”

What’s on the horizon?

Indeed, food and beverage industry interest is abundantly reflected in algae-related patent filings, which numbered 508 worldwide in 2019, more than doubling from 246 five years earlier. The market researcher said patent activity reflected algae’s importance as a food source in Asia, but noted a shift toward Europe and the United States.

Mintel suggested that high-protein algae-based snacks could migrate further from Asia to Western regions, but potential applications are much broader than that.

“Demand for proteins that are compatible with both plant-based and gluten-free dieting could open opportunities for algal proteins,” it said.

The market researcher suggests a range of other potential uses for algae and microalgae, including for food flavouring and colouring, as a salt substitute, a promising source of prebiotics, a vegetarian source of omega-3 fatty acids, a source of carotenoids for health and wellness products, and as a micronutrient powerhouse to combat malnutrition.