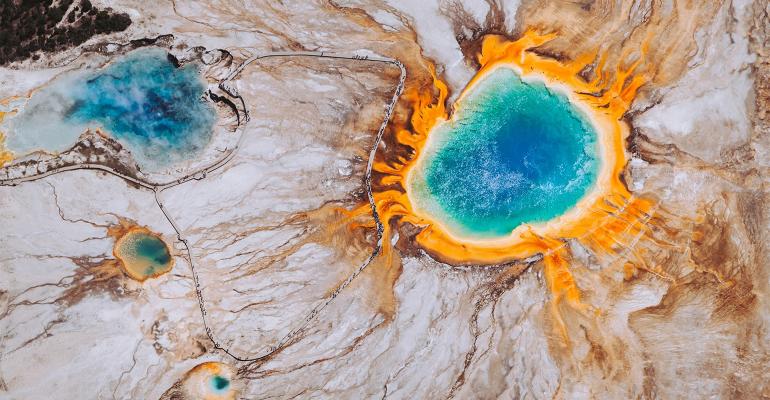 Discovered during a NASA-backed research project, this nutritional protein-packed fungus beats meat for protein, plant-based foods for fibre, and is more sustainable than both, says the start-up commercialising it.

In 2009, scientist Mark Kozubal was conducting research into the different life forms that can survive extreme conditions – known as extremophiles. The NASA-supported project brought Kozubal to the acidic volcanic springs of Yellowstone National Park where he discovered microbes that had adapted to survive in the some of the harshest conditions on earth.

The microbe discovered by Kozubal, now chief science officer and co-founder of Nature’s Fynd, has been named Fusarium strain flavolapis – flavolapis means yellow stone in Latin – and will be produced by the start-up using a biomass fermentation process.

“We are using a microbe that happens to be a fungus; it’s not a plant or an animal, it’s the third branch of life. [Fungi] are an important part of the tree of life but we forget that and think just of mushrooms.”

“The spring we looked at is really not very conducive to life as we know it – it has the pH equivalent of a car battery – but the good news is that life finds a way,” Jonas told Fi Global Insights. “Some microbes have adapted to this extreme environment and developed tactics to do more with less. We really learned by studying nature here and our technology is based on understanding what nature has already optimised and produced.”

‘This is a whole food’

The protein, which Nature’s Fynd will sell under a B2C brand called Fy, contains 50% protein with all twenty amino acids (including the nine essential ones) as well as 30% fibre that includes beta-glucans. It is also low in fat and cholesterol-free.

Unlike typical submerged fermentation, Nature’s Fynd has developed its own patented technique for biomass fermentation called liquid air surface interface fermentation, which it says is more efficient and improves the properties of the fungi.

Jonas is keen to stress that its mycoprotein is not highly processed. Just as meat is a collection of high-protein animal cells that naturally bind together, Fusarium flavolapis is made of natively moist and texturized high protein fungi cells.

“This is a whole food, not an ingredient. To make the analogy with soy, you harvest the bean and then you have to process [it] to extract the protein fraction, dry it and texturize the flour. It’s highly processed. Think of us as the soybean – that’s it,” he said. “We are not extracting a fraction and recreating a structure. What we have is […] like one sheet of protein. Imagine something that has the native texture of raw chicken breast.”

“Once we’ve grown the protein slab, the transformation into the end product is very similar to what you would do to transform any meat or dairy products, and we are working with meat and dairy contractors who are also processing [animal-based] meat and dairy on their other lines. The only difference is the source of protein.” 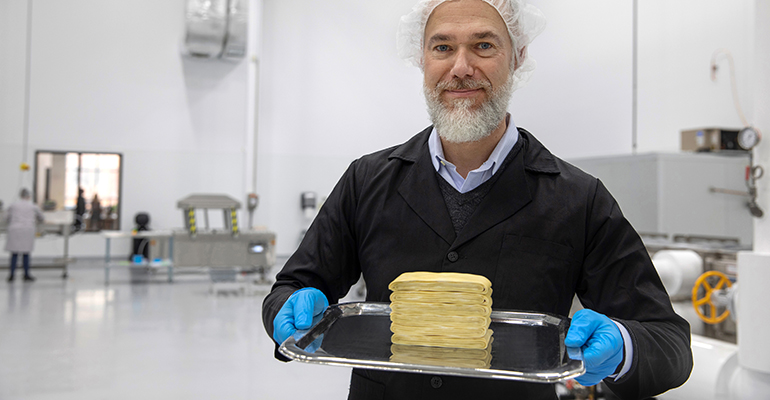 Watch this space: B2C product to launch in 2021

After suffering some COVID-19 delays, the company is currently scaling up production at its pilot facility and preparing to launch its first product next year. It also plans to have a B2B line, partnering with manufacturers for co-branded products.

Jonas did not reveal what exactly the consumer-facing product would be – Fy can be used in a range of products from meat alternatives to vegan yoghurts to cereal bars – but the company is clear on the terminology it wants to use. Fy will be marketed as ‘nutritional fungi protein’ rather than mycelia or mycoprotein, which it says are not widely understood by consumers.

“Nutritional fungi protein is very descriptive. It’s not hiding the fact it’s a fungus and it is taking inspiration from nutritional yeast that consumers know how to use and have seen for years,” he said.

Fy has a relatively neutral taste that is comparable to typical plant-based sources with “an umami backbone”, according to the CEO. It can also be kept in its moist, solid format for meat analogue applications, turned into a liquid for a beverage base, or dried and turned into a flour for baked goods.

“What we have is a new protein platform. In the same way that with soy, you can have soy milk, a soy burger, or a soy protein bar, you can all of these with nutritional fungi protein,” added Jonas. “There are lots of opportunities to improve the nutritional density of products and make cleaner, shorter labels.”

It can also manufacture in urban environments, bringing food sources closer to where people live.

“We are literally here in an old warehouse in Chicago’s old meat packing district. It’s interesting that we are able to make this protein in the location that used to be the historical centre for animal protein in the US,” Jonas said.

The start-up has already completed GRAS (generally recognised as safe) self-affirmation and will be submitting a novel food application for the EU market. Seeking regulatory approval for Asia is also an important objective going forward, Jonas said.

“We think it’s important to get the regulatory aspect done […] in geographies where the protein gap will become more severe – China and India – due to demographic growth. We need to be able to anticipate this demand.”

Becoming cheaper than animal sources of protein will be crucial to achieving this, however, the efficiency of fermentation makes this easier as huge scale manufacturing is not required to become cost efficient, Jonas said.

The company has been backed by big name investors, raising close to US$130 million so far, including $80 million in March this year in a round that was co-led by Breakthrough Energy Venture (headed by Bill Gates), and Generation Investment Management LLP (chaired by Al Gore).