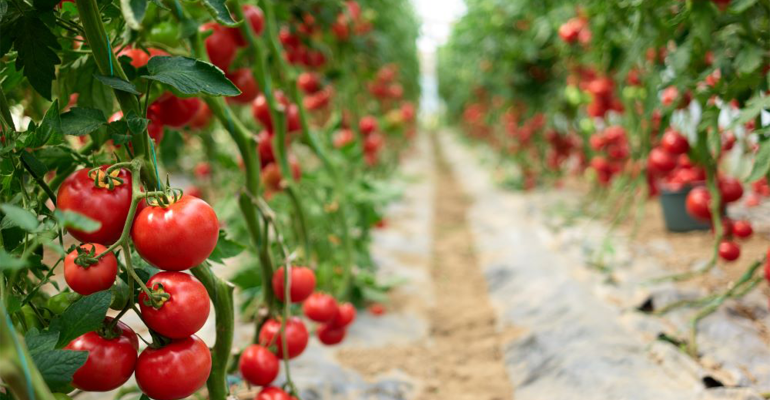 Scientists are working on a project to extract the enzyme rubisco from tomato leaves to explore its potential as a plant-based protein.

The Dutch Wageningen University’s research centre, Wageningen Food & Biobased Research, is exploring ways to extract high-value rubisco protein from tomato leaves. Adopting an approach similar to an existing one the researchers used to isolate residues from other crop residues, the researchers are advancing the industry’s understanding and potential applications of rubisco.

Rubisco as a protein source

Rubisco (Ribulose-1,5-bisphosphate carboxylase/oxygenase) is an enzyme in all leaves as it is involved in the first major step of carbon fixation.

“Rubisco is probably the most abundant protein on earth, and it is present as (water) soluble protein in leaves,” says Marieke Bruins, senior scientist in protein technology and expertise leader in biomass fractionation at Wageningen University and Research.

Commenting on what inspired the team to research and develop the protein, Bruins relays:

“Unlocking this potential will be a major step forward.”

A two-year project, due to end on 31st December 2022, has reached an important milestone. At present, the researchers are still optimising this process, and Bruins says, they can now also perform it in tomato leaves, an otherwise potentially toxic leaf.

Researchers have found that they can mechanically extract rubisco by a series of unit operations, including pressing and filtration steps.

Technology is at the forefront of researchers’ studies. In the project entitled, Technology development for healthy and safe protein during biorefinery, scientists from the university analysed rubisco extraction from sugar beet leaves. The researchers sought to find out whether an identified method of rubisco extraction from sugar beet leaves could be applied to tomato leaves by isolating the protein.

By using the existing method and isolating the rubisco from the tomato leaves, the scientists aimed to remove hydroxytomatine, a toxin that could make them appropriate for direct consumption.

After carrying out their experiments on a pilot scale, the researchers reported they delivered a high-value protein, which is free of toxins.

Agri-food companies are investigating the potential of biorefinery processes for protein production. Using technology in protein biorefinery sees the sector gain a deeper understanding of component interactions, researchers at the university say.

The scientists add that distinguishing between positive and negative protein components will lead to process improvement and the expedited creation of new biorefinery processes to better the health and safety of the food we eat.

Newly discovered protein sources such as concentrates and isolates from leaves and pulses offer an original solution to move away from animal-based feeds to plant-based varieties. The researchers explain that refinement and adaptations in today’s processing conditions will help to create more bespoke and specific sub-fractions of existing concentrates and isolates from these newly-identified protein sources.

By developing these protein sub-fractions through refinement and adaptations, the researchers anticipate that these will have improved nutritional value, better bioactive functionality and lower antinutritional factors (ANF).

White and odourless with gelling capabilities

As meat and dairy substitutes rise in popularity due to consumers’ increasing awareness of sustainability and health and wellness, developers are progressing their plant-based offerings.

However, functionality and sensory appeal have been a barrier to mass uptake, as consumers recognise differences in taste, texture and flavour from their meat and dairy-based counterparts. Today’s shoppers want plant-based foods that can balance and meet their demands for functionality, taste, texture, user-friendliness and sustainability.

Rubisco protein has low variation in the amino acid profile and is rich in essential amino acids, meeting the required standards, Bruins says.

“It also has great gelling capabilities, which makes it interesting in plant-based products,” adds Bruins.

When extracted in the right way, it is white and odourless.

“It can aid in a more sustainable future, as it can be extracted from side streams that are otherwise discarded or composted,” says Bruins.

Eliminating waste is also at the forefront of manufacturers’ ingredient selection criteria to avoid unnecessarily throwing away parts of the product. With efficiency and economies of scale firmly under the spotlight of protein extraction, understanding how to utilise the agricultural residues is crucial.

Leaves, seed pods, stalks and stems are all examples of agricultural residues. For over ten years, the researchers at Wageningen University and Research have examined how protein extraction using agricultural residues can occur effectively and be economically viable. These residues are left in the agricultural fields once the crop has been harvested.

Working with experts in plant breeding and plant physiology, the research comprises process technologists and biochemists who, together, examine the potential of agricultural residues.

In the future, the researchers hope to collaborate with the private sector to further propel its protein extraction technology at scale within the food and agriculture industry. Reaching this next phase may see the researchers partner with greenhouse horticulture businesses, those that use plant-based proteins as inputs, and producers of meat and dairy substitutes.

The question, then, is whether rubisco is a real contender in the plant-based protein world or whether it will remain marginal.

“As it is highly functional, it will be a real contender,” says Bruins. “Not for use as a bulk ingredient, but to get better properties in plant-based products,” Bruins adds.

Commenting on the impact rubisco will have on the plant-based sector, Bruins believes “it leads to a whole new way of thinking, where side streams become as important as the mainstream”.