MicroThermics uses virtual reality to serve clients at a distance

MicroThermics has created a 3-D virtual trade show platform and several at-distance services for clients to inspect its processing equipment and receive operational and process support, despite Covid-19 travel restrictions.

In early March MicroThermics, a supplier of small-scale pasteurisers, UHT/HTST sterilisers and aseptic processors, realised that many of this year's trade shows were likely to be cancelled as a result of the pandemic. What is more, it had to call a halt to hosting clients at its facility in Raleigh, North Carolina.

How, then, could the company showcase its latest innovations and enable essential R&D to continue when in-person meetings are impossible?

Miles described the effect as a "bit like Google Street View, where you can pan around and move from one station to another".

Through a guided or self-guided tour, visitors can see all parts of the machinery up close from all angles and click on 8 or 9 'call outs' per machine for pop-up text and video containing more information. 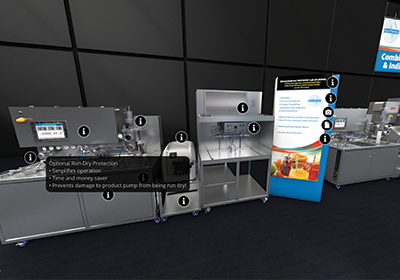 The newest machinery is in the centre of the booth – a new line of automated, self-cleaning machines that can reduce the machine's start up and shut down time by 40% and the operator's attendance time by 80%. The line is known as AI, after the company slogan 'Always Innovating'.

MicroThermics' virtual booth is being premiered during the IFT trade show. The immersive, interactive experience sets MicroThermics apart from other exhibitors, whose trade show space consists of a flat web page, downloads, and virtual chat.

The virtual booth will be updated as the company introduces new products and services. Later in the year it will be re-branded for Fi Europe 2020, which is scheduled to take place from 1-3 December in Frankfurt, Germany. In fact, interactive touch screens for accessing the virtual booth from MicroThermics' physical booth will be incorporated into its design.

Live demos from the comfort of your own computer

MicroThermics' online innovations to overcome Covid-19 challenges do not stop here. The company has pivoted several of its other services so it can continue working with customers throughout the pandemic.

For instance, buying a new piece of equipment is a substantial investment for a client, and usually they send between two and five representatives to Raleigh for a demonstration day. One such demo day was scheduled for ten days after shut-down in North Carolina. The only obstacle to the client signing an order form for a new processor was seeing it in action first. When they suggested viewing it via a Zoom call, MicroThermics swung into action to turn the lab into a film set.

The lab was re-painted, a new conference video camera was purchased, and new microphones were bought on the recommendation of a technical services manager, who is also a seasoned video blogger. When the trial run showed up too dark, stage lights were brought in. A technician who had theatre experience in high school and college stepped up as the first live host via Zoom.

The demo was a success and the deal was closed.

Since then, the video demos have proved wildly popular.

"One person said, 'this is the coolest thing since quarantine'," said Miles.

The platform is also used for face-to-face equipment tune-ups and staff training sessions.

Another remote service offered by MicroThermics during the shut-down is remote miniature plant trials, which the client can watch and provide additional instructions where necessary.

In normal times MicroThermics offers plant trials with clients in attendance at its Raleigh facility. While very occasionally (three or four times a year) a trial would be conducted remotely but usually only for simple recipes or as a follow-up to a visit.

Now MicroThermics is conducting two or three standard remote trials each week. Clients send ingredients and recipes via overnight delivery, and MicroThermics sends the samples back the following day.

The new way of working will be offered even after the pandemic threat has passed. As no-one needs to fly into Raleigh, there are significant savings in time and money both for MicroThermics and for the client.