Is nitrite-free meat the next big ‘free from’ opportunity? 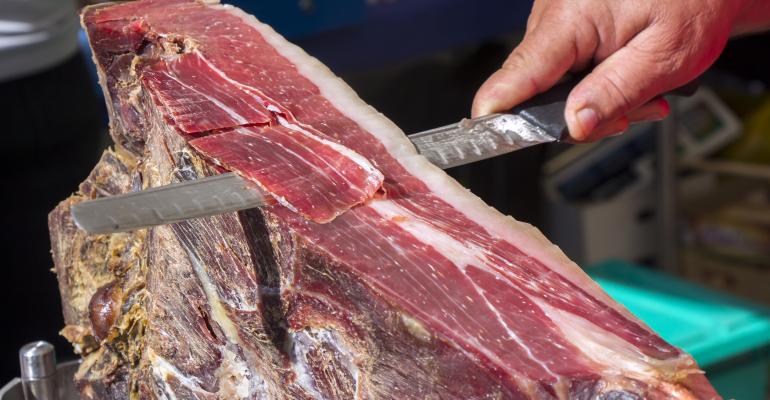 Parma ham's slow curing process is nitrate-free.
A handful of companies is looking for ways to produce nitrite- and nitrate-free meats, but it remains to be seen how much demand there will be – despite the World Health Organization linking the compounds to increased cancer risk.

Sodium nitrite and potassium nitrate – also known as saltpetre – have been used to rapidly cure ham and bacon for decades. Apart from speeding up the curing process, they extend the shelf life of processed meats, give them their pink-red colour, and provide a distinct tangy flavour. However, the World Health Organization has linked nitrite and nitrate consumption from processed meat to increased cancer risk, because they form carcinogenic N-nitroso compounds when they react with certain components in meat.

As a result, several companies have identified a potential new ‘free from’ market opportunity and a small number of nitrite-free products is available across Europe. In the UK, for example, Northern Irish company Finnebrogue sells nitrite-free, E number-free Naked Bacon and Naked Ham, while in France, mainstream ham producers Fleury Michon and Herta have both introduced products with no added nitrites.

In the US, celery extract is often used as a natural alternative to sodium nitrite, but it creates the exact same nitroso compounds in the meat, and could not be labelled as nitrite-free in the EU. In Europe, options for nitrite-free processed meat include using certain organic acids, microbial solutions, plant-based extracts, and processing technologies like high hydrostatic pressure (HHP).

Denis Lynn is the chair of Finnebrogue, which had been looking for a way to produce bacon and ham for the UK market without nitrites when he came across a Spanish company called Prosur. It supplies a blend of fruit and spice extracts that helps processed pork retain its pink colour without nitrites. The resulting product is not cured, but it is injected with the extracts, just as ordinary ham is injected with sodium nitrite. This makes it a cheaper alternative than some other ways to produce nitrite-free meats, such as the slow curing process used for Parma ham.

“We are on a mission to widen the availability of nitrite-free products and are willing to work with government and our colleagues in the food industry to achieve this goal,” he said. “These chemicals should not be in food.”

Although the WHO linked nitrites and nitrates with cancer, the relative risk is still low. Its report found an 18% increased risk of colorectal cancer with each additional 50 grams of processed meat per day, equivalent to about one sausage or two rashers of bacon. To put this in perspective, smoking increases relative lung cancer risk by 2,500%. In terms of absolute risk, an individual’s likelihood of colorectal cancer increases from about five in 100 to six in 100, if they consume 50 grams of processed meat every day.

This increase in risk may be small, but it still exists, and Lynn says sales of Finnebrogue’s nitrite- and nitrate-free bacon and ham have been strong.

“More than that, public awareness of nitrites and their risks is rising,” he said. “…It is certainly the case that society needs to do more to encourage lower nitrite consumption. We must work together to raise awareness of their risks and encourage the much wider use of safer alternatives.”

Meanwhile, researchers continue to assess the risks, and the European Food Safety Authority (EFSA) concluded in June 2017 that nitrates and nitrites are safe for most population groups at current levels, although with medium exposure, toddlers and children could slightly exceed acceptable daily intake levels.

Corinna Hawkes, a professor of food policy at City University in London, also suggested that there should be greater urgency about the issue, including educating consumers about potential risk. Indeed, when the WHO first published its report in 2015 on nitrites and increased cancer risk, UK sales of processed meat fell by £3 million in two weeks, but they quickly rebounded, partly because the WHO issued a clarification to say it was not telling people to stop eating processed meat.

“The association between eating processed meats and colorectal cancer makes it imperative that more scientific research is conducted to understand the nature of the link,” Hawkes said. “In the meantime the government should consider whether consumers need better information to alert them to the risks.”