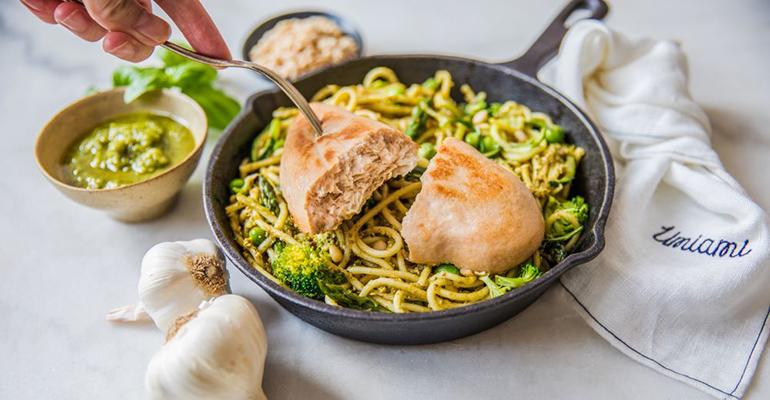 Tristan Maurel and Martin Habfast founded Umiami in 2020, driven by the ambition to create food that is appealing to gourmet food providers who want to lower their meat consumption.

Umiami says it uses an “unprecedented” technique to texturise plant proteins to create the world’s first plant-based whole-cuts. Intending to develop better taste and better-for-you meat-mimicking products, Umiami states its production process is the “first in the world” that can scale the production of thick and fibrous chicken breasts.

Extrusion technology is the most common technology used in the plant-based meat industry. However, seeing how its applications were limiting, Umiami developed its “umisation” method, a new protein texturising process that gives a fibrous consistency to plant

matrixes and allows control of fibres’ size, direction and thickness.

“We must see umisation as a development platform opening a new chapter for the plant protein market: it provides an exceptionally similar texture, limits the alteration of the vegetable proteins, preserve food flavours and does not require the addition of artificial texturising agents,” says Tristan Maurel, co-founder and CEO of Umiami.

By applying its “umisation” technology, the start-up states it is able to manage the thickness and the direction of the meat-like fibres in thick whole-cut-like products, enabling the start-up to create more diverse product varieties than traditional extrusion technology allows.

Umiami also notes its process is cleaner-label than current industrially available technologies as it contains no texturing agents, no methylcellulose and a concise ingredient list. The food technology start-up also believes its proprietary process enables a better taste profile by creating a tender texture and working with its flavourist to develop meat-like juiciness and fatty mouthfeel texture.

Improving the texture of meat alternatives

“In the US, for instance, chicken breast is the most consumed meat,” says Habfast.

However, extrusion cannot reproduce those larger cuts: dry extrusion can only create minced products such as patties or sausages, while wet extrusion is best for thin and chopped pieces like small chicken-like pieces, Habfast says.

“Our process is unique in that it bridges this gap,” says Habfast. “Through the functionalities of plant proteins, it allows us to create large cuts containing the long fibres of meat.”

Umiami sought to understand and master the direction of these meat fibres along with other parameters such as juiciness (which the brand states it can get to higher levels than extrusion), bite, flakiness, colour, fat, and texture, which allows the start-up to recreate an extensive range of meats and fish.

The Umiami plant-based chicken breast is made with fewer than ten ingredients, the food technology start-up says, noting how this compares with approximately 30 in other plant-based meat products currently on the market. The company’s products are made with “easy-to-understand” ingredients, such as proteins, water, oil, salt and natural flavours, Habfast says. 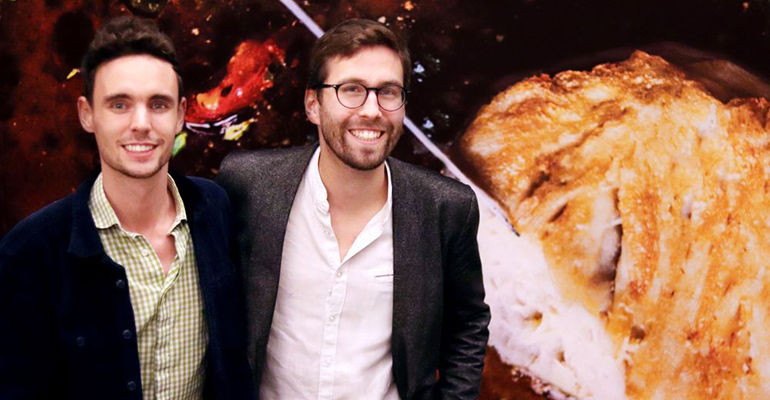 Taste impact and nutrition of inputs

The new extrusion technology does not affect the flavour of its plant-based alternative products as much as high moisture extrusion does, Habfast says, and it does not result in the characteristic ‘beaniness’ that the start-up says can often be found with plant-based meat.

Umiami is also able to have higher control over flavour, as it does not have to blanket off-notes, which it states results in a more natural tasting flavour profile.

Its products have “excellent nutrition”, Habfast says, as they have more than 20% of protein and typically yield Nutriscores A or B. For example, Umiami relays how its plant-based chicken breast has a B Nutriscore and contains as much protein as its animal counterpart, without any additives.

Scaling up: Multi-million investment and industrialisation

“However, as it’s very scalable, we’re far from the costs of other technologies such as shear cells or 3D printing,” Habfast continues.

On 6 April 2022, Umiami announced it had raised $30 million (€28 mn) and industrialised its 100% plant-based chicken breast production.

It claims this is the largest European Series A in the plant-based meat market. The start-up received investment from multiple investors, including the French Tech Seed Fund, which is managed on behalf of the government by Bpifrance within the France 2030 plan as part of its aim to encourage the international reach of French food technology.

The start-up brand notes that producing the meat-alternative chicken uses 25% less energy, 50% less water and land and also emits half as much greenhouse gas as an animal chicken breast.

Starting with the production of a plant-based chicken breast, Umiami will open an industrial research and development (R&D) centre near Paris, France, in May 2022. The team will focus on scaling up its production and expanding its meat-alternative portfolio.

To further its hopes of contributing to sustainable food production, Umiami will also establish a dedicated plant by 2023. It will produce 15,000 tonnes per year for its business-to-business (B2B) customers in the global food manufacturing and foodservice space.

“Between now and 2025, we will hire about forty scientific experts to develop our innovations and industrial equipment and diversify our ingredient sources by opening research programs on emerging alternative protein, such as algae or mycelium,” explains Sylvie Breton, R&D director of Umiami.