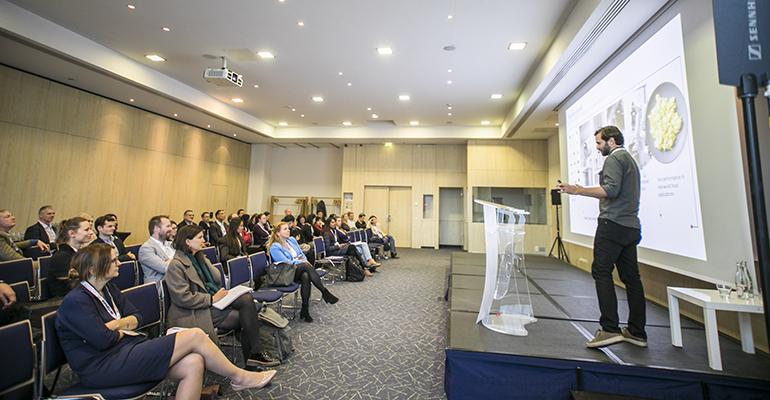 “Indistinguishable from the real thing”

JUST, formerly Hampton Creek, started out with its vegan mayonnaise six years ago, developed using pea protein as an emulsifier instead of egg. It proved to be hugely popular, propelling the company’s development of a broader range of animal-free products.

“No one eats mayonnaise to get their eggs for the day – it doesn’t make sense,” said the company’s Senior Sourcing and Sustainability Director Udi Lazimy. “And there are many other products like that where you could replace animal ingredients and people wouldn’t necessarily know the difference.”

For now, Lazimy says the company is focusing on its JUST Egg, which he claims is indistinguishable from the real thing – perhaps even better. Made with mung bean protein, the liquid egg substitute results from the company’s work to characterise underutilised plant proteins.

A library of high-protein plants for food industry

Lazimy has spent the past several years creating a library of high-protein plants for food industry use, bringing together promising plant samples from over 70 countries.

“The main focus is finding the sweet spot,” he said. “To find plants that are high protein, easy to work with, scalable and with a low cost per kilogram. What plants make the best replacements for animal ingredients? And how do we find those plants? What plants have the highest protein?”

The company received a patent two years ago for a screening method that uses robotics and artificial intelligence to analyse potentially useful plant proteins, such as the mung bean protein that led to JUST Egg. Only about 18 plant families are currently used in human food systems, out of a possible 400+. Even within this relatively small number of sources, about 50% of the calories we consume comes from just three individual plant varieties, namely wheat, corn and rice, which also account for the bulk of the proteins we derive from plants. For novel food proteins, sourcing is still a major challenge, however, as the quantity is either not available or it is not of the required quality, Lazimy says.

Making it easy to make the good choice

At the moment, the company has no plans to enter the plant-based meat substitutes market, but meat from cellular agriculture is around the corner for JUST, he says, starting with chicken, and then using cells from the cattle used to produce prized wagyu beef – thereby taking animals out of the meat production process.

“We truly believe the food system is broken in a lot of ways,” he said. “Our goal is to make it really easy for people to eat well, to make the healthy choice, the good choice.”