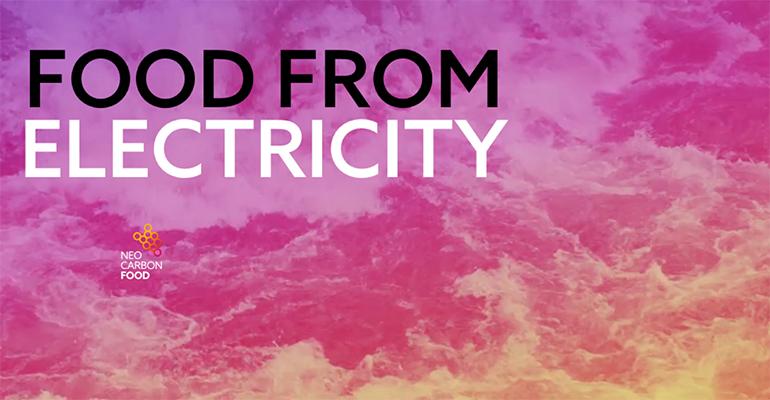 Watch out Quorn! Neo Carbon Food, a new protein from electricity and CO2, could be on our plates by 2024 and would help address our food challenges.

Neo Carbon Food, a new protein from electricity and CO2, could be on our plates by 2024 and would help address to some of the major challenges facing the food industry today.

Predicted global population growth to 9 billion by 2050, coupled with falling agricultural yields due to the effect of climate change and drought, is causing widespread concern about future food security. What is more, there are major conflicts over land use, as destruction of forests continues to make way for cultivation of crops such as soy and for livestock farming.

Two resources in abundant supply, however are sunshine and CO2 -- one fifth of CO2 caused by human activity comes from food production.

Dr. Juha-Pekka Pitkänen of the VTT Technical Research Centre of Finland told delegates at the Future of Nutrition conference that the production process for Neo Carbon Food is comparable to beer making. The single cell protein is produced in a bioreactor with minimal input requirements: electricity, CO2, water, minerals and microorganisms.

The technology is not really new. The first publications on growing microbes with CO2 and electricity, by Prof. Hans Günter Schlegel, appeared Nature in 1965. Back then, however, the high price of electricity meant commercialisation was not viable.

"But the world has changed. The price of solar power has come down," Pitkänen said. 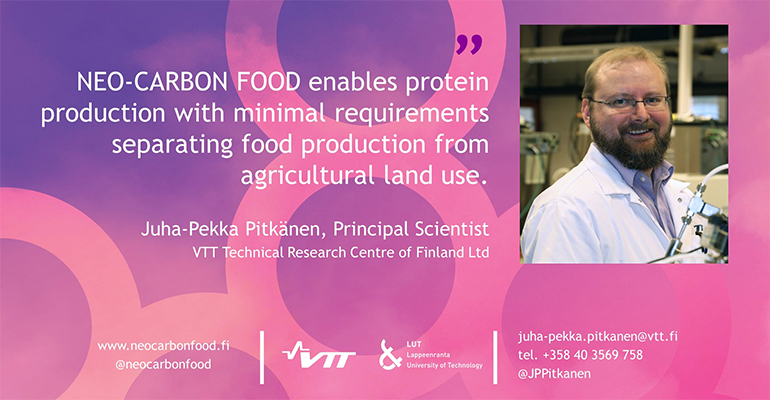 Pitkänen predicted that Neo Carbon Food could compete with leading meat protein alternatives -- such as Quorn, tofu and insects -- in a high potential market. He cited forecasts that the meat substitute market will be worth US$5.9 billion by 2022.

Tests to date have shown that the new protein is comparable to spirulina, chlorella and Quorn in terms of biomass composition (protein, fat, carbohydrate, ash, and other) and in amino acid composition.

Flavour wise, it is described as "very mild". "It tastes and looks like wheat flour," Pitkänen said.

In terms of price, too, Neo Carbon Food could be competitive. If a bioprocess facility is able to achieve production of 1 million kg/day at 60% electricity to biomass efficiency, the protein could sell for €2 per kg.

By way of comparison, the global trade price for soy protein is currently around €1/kg, while protein food additives sell for between €3 and €10/kg at wholesale, and Quorn retails at €6/kg.

Commercialisation of Neo Carbon Food is still some way off. Pilot production phase is currently gearing up and is expected to run until 2020, while novel foods testing will take place between 2022 and 2024.

All being well, construction of a full scale facility will commence in 2022. Production would begin in 2024 with a capacity of 5500 kg per day.

Units can be installed anywhere, from Finland to the Sahara desert, independently of current agricultural approaches. They take up considerably less space than the land required to cultivate protein-rich crops such as soy. The only condition is that there must be a cheap source of electricity.