Sophie's BioNutrients, with its innovative alternative protein derived with a true circular economy, were crowned winners in the Most Innovative Plant-Based or Alternative Ingredient category in 2021.

We caught up with CEO & Co-founder, Eugene Wang, after receiving their award at Fi Europe, co-located with Hi Europe 2021 which was hosted live in Frankfurt, Germany.

During this interview, Wang shared a bit more information on what makes Sophie's BioNutrients so unique, as well as some of their plans for the future. Below are some of the highlights from the interview conducted on the show floor at Fi Europe 2021 in December:

Q: Can you tell us a little bit about your company? What impressed the judges so much?

"We are the world's first alternative protein startup making the protein from microalgae using fermentation technology. And on top of that, we use industrial food waste to feed our microalgae so that we can reduce the carbon footprint even more. Better yet, we are the first ones to focus our attention on the plant-meat and plant-milk application. This is really the key difference."

Q: What kind of fermentation are we talking about?

"It is more a biomass fermentation in the sense that we are trying to create a commodity in the way we hope down the road in the future that we can replace the soy protein and the whey protein from cow milk." 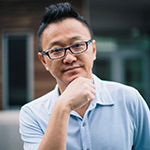 Eugene Wang grew up immersed in the vegetarian food business. Since 2010, his vision for launching Sophie’s Kitchen, the first Plant-Based Seafood Alternative, has manifested into a viable category innovation lauded by the press and social media thought leaders. Sophie’s Kitchen had won numerous recognitions from companies like PepsiCo and Chipotle. In 2019, Eugene took the alternative protein to the microorganism level and started another new venture in Singapore, Sophie’s BioNutrients Pte Ltd. He won the grand prize of $1 million SGD at The Liveabilty Challenge 2019 with this new project and started his first protein fermentation facility in Singapore.