Turkish-US start-up Biftek produces a growth medium supplement made from lyophilised, bacteria-based serum to replace foetal bovine serum (FBS) in cell-cultured meat production, bringing the price down from $400 per litre to just $10 per litre.

Producing foetal bovine serum, which is used as a growth medium for muscle stem cells in the production of clean meat, is not exactly ‘clean’.

A by-product of the dairy industry, it is harvested by removing the calf from the slaughtered cow and drawing its blood via a process of cardiac puncture, which is usually performed without anaesthetic.

In addition to the moral objections, FBS is very expensive and is currently the main reason why cell-cultured meat today is still so expensive. Today, FBS costs between $300 and $400 dollars per litre, and around five to seven litres are required to make one kilo of muscle tissue. The price can also fluctuate widely depending on market conditions such as global meat demand, seasonality, and weather, according to consultancy Strategic Directions.

Dr Can Akcali, chief scientific officer at Turkish-US start-up, Biftek, said:  “[…] foetal bovine serum is a cocktail, if you like, that contains all the necessary and important ingredients for the growth of the embryo. This FBS is required for muscle growth, the skin, bones, the brain and the nervous system.”

“When we decided to go in this direction, [we realised] if we don’t need the heart, bones, nervous system etc – we just need the muscle tissue – then that would cut the cost because FBS contains approximately 3,000 growth factors or proteins that are necessary for the growth of the embryo but for the maturation of muscle cells you don’t need that many.”

Biftek, which has operations in Delaware, USA and Ankara, Turkey, uses the by-products of beneficial bacteria found in the microbiome of the animals’ gut and other organs to replace FBS.

“We use these beneficial microorganisms to isolate the products that they synthesis and use for survival. These bacteria can be isolated and purified and we use it for the growth of muscle cells,” Akcali told Fi Global Insights.

“When we do this, we also have positive controls that contain the normal, conventional FBS and our results shown that we have a similar rate of cell proliferation in terms of muscle cell growth. It is really similar to FBS. So, why are we doing this if it’s not better? The thing is, instead of costing $400 for one litre of FBS, one litre of our product costs only $10.”

The bacteria Biftek uses have been approved by the US Food and Drug Administration (FDA) in other applications (i.e. not for the production of clean meat) and Akcali was confident that seeking regulatory approval for its solution would be relatively straightforward. 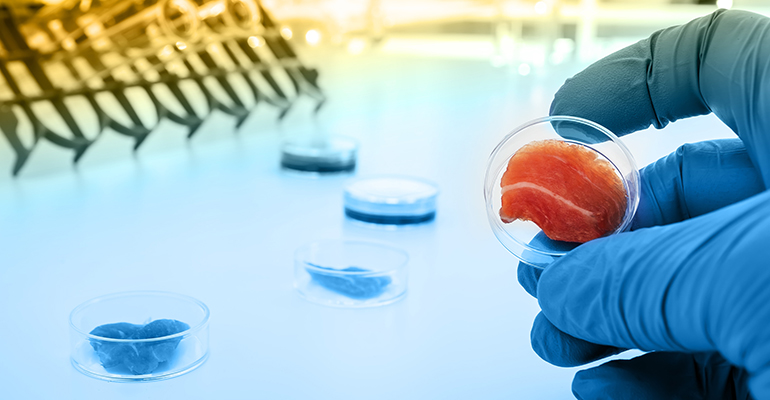 The start-up has already begun to receive offers of collaboration from cell-cultured meat companies.

“We think [other companies] are not doing research on this or any kind of R&D on microorganisms. They may use recombinant growth factors to generate [foetal bovine serum] by using recombinant DNA technology but ours is different […] and therefore companies are sending us letters of intent for collaboration,” said Akcali, who is also professor of cellular and molecular biology at Ankara University and co-director of the Stem Cell Institute in Ankara.

Its final product is lyophilised and dried, meaning it can be shipped cheaply and easily in an envelope – an additional advantage over FBS, which is a biologically active molecule and must be kept at temperatures of at least -20 Celsius. Removing the requirement for cold chain storage will further bring the price down, Akcali said.

Why clean meat? ‘Because there is no other choice’

The idea of growing meat in a laboratory might have been dismissed as science fiction or simply unpalatable around 15 years ago but, according to Akcali, consumer acceptance will rise as the price falls and people become accustomed to the idea. Insulin, after all, is made using bacteria and millions of diabetics around the world inject themselves with it every day, he said.

“If you put all the factors together – money, climate, health, animal welfare, and population increases – there is no other choice but to find alternative ways to feed all these people. Clean meat is one option and it’s a good option because it’s real meat, not that plant-based meat. We are producing meat not in an animal’s uterus but in a bioreactor. It contains the same amount of nutritional and protein values because the source is not artificial, it comes from the animal.”

Nevertheless, Biftek expects the cell-cultured meat sector will face initial opposition or, at the very least, hesitancy to try its products. It has engaged with some religious scholars to see if the concept can be considered compatible with religion.

“We are not playing the role of god,” Akcali said. “We are trying to produce a solution that will become imminent in maybe 10 or 15 years. If you explain it to the public in words they can understand, they don’t resist too much and when it costs less, I am sure there won’t be a problem. But nowadays, this is the pain of the initial process.”

The company was founded two years ago in Turkey. The company has established its headquarters in the US under the company name Biftek Inc, although R&D operations will remain in Turkey. Akcali explained that the US is a more attractive location to international investors and there are fewer obstacles to producing meat such as pork.  It is currently looking for seed investment and is aiming to raise $2 million in 18 months. At the time of our interview in mid-May, Biftek had secured around half.  It has also received funding from Big Idea Ventures, a New York-based accelerator, and from the Turkish government.

These funds will go towards accelerating the microorganism screening process and expanding its research into using other animal cells; so far, Biftek’s work has focused on bovine cells to produce beef but it has identified potential demand from cell-cultured companies working with chicken and fish.