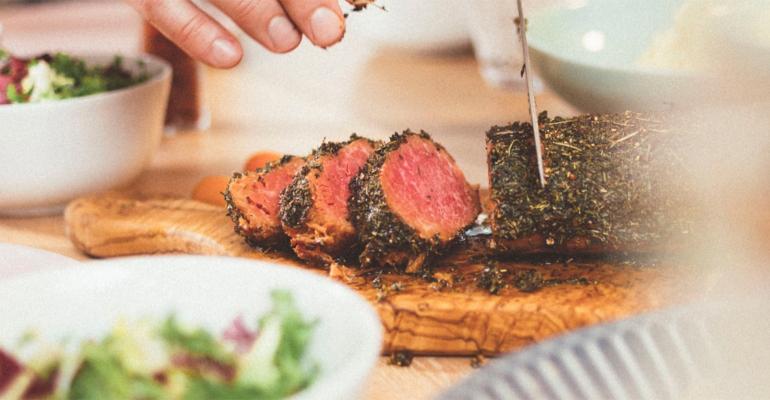 Slovenian start-up Juicy Marbles is looking to move the plant-based category beyond the ubiquitous burger with its premium filet mignon steak.

In order to create a plant-based filet mignon – one of the most tender and expensive cuts of meat – the co-founders of Juicy Marbles began by developing their own food processing equipment in their kitchen using an Arduino board.

Today, the Arduino board has been replaced by its ‘Meat-o-Matic Reverse Grinder 9000’, a machine that can mechanically mimic muscle texture by layering soy protein into linear fibres, and its flagship product is a plant-based filet mignon.

“It’s not exactly like meat but it’s frighteningly close,” said Vladimir Mićković, co-founder and chief brand officer. “For a lot of vegans, it’s too close although meat aficionados will spot the difference. But it offers that juicy experience of meat, it’s versatile and easy to prepare in the same way as meat, and it’s a big juicy piece of protein you put on your plate. All the parameters are there but there are nuances just as with beef there are different nuances with different [cuts].”

The start-up plans to build two production facilities, one in the US and one in Europe, with a commercial launch scheduled for later this year. Its plant-based filet mignon steak will cost around the same price as a mid-range, meat filet mignon, or between US$15 to $20 for two steaks.

Juicy Marbles’ ingredient list is visible on its website but the start-up is tight-lipped over the details of its patent-pending ‘intramuscular’ fat system that recreates fat marbling and keeps the steak juicy during cooking.

It has reason to be so secretive, Mićković said: during an early phase of its product development, Juicy Marbles sent samples of its steak to plant-based fans in exchange for feedback it could use to improve the product. When one order came through for 30 filet mignon steaks, it dug around and traced the order back to the chief sensory analyst of a major food company with a plant-based range.

“It’s very advanced because it has its own aroma that emulates the aromas of animal fat and melts at specific temperatures to ensure flavour of the juice stays intense. In meat, marbling is what gives it most of the flavour, especially with filet mignon. The cheaper versions are not known to be very flavourful because they don’t have much marbling due to the position of the muscle. We, on the other hand, can make as much marbling as we want because we control that. But how we do it is our trade secret,” he told Fi Global Insights.

The protein base, meanwhile, is made from soy, chosen for its functional properties. Soy’s relatively neutral flavour allows the start-up to recreate the taste of steak using natural flavourings its water holding capacity recreates – and even improves – the juiciness of a medium-rare steak.

“Juiciness retention is not something people usually measure but when you chew meat, the flavour is very intense at the beginning, then the juices run out and you just have to chew it. Here, we have a much more prolonged sensation of flavour that lasts the entire time you chew.”

When fried in a little oil, just like a meat filet mignon, the soy-based steak develops a crust on the outside and remains tender on the inside. It also keeps its natural beetroot- and carrot-derived red colour throughout the cooking process. 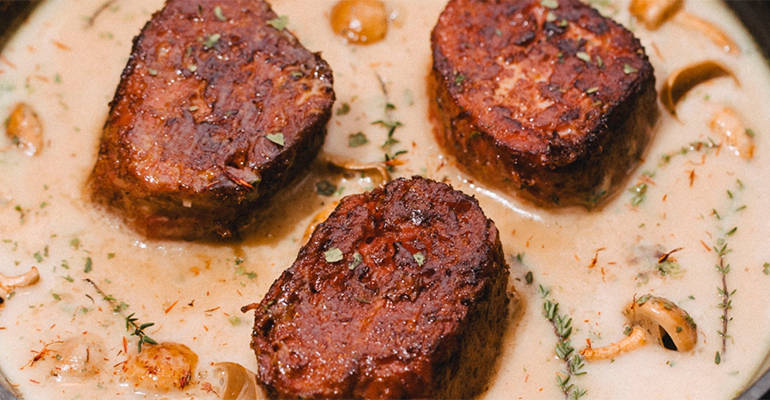 One serving of Juicy Marble’s current filet mignon provides 220 calories, 11 g of fat, 26 g of protein, and no cholesterol, although this may change as it makes final tweaks to the formulation. Improving the nutritional profile of beef is something the company is keen to explore.

“Nutrition is the first thing where [plant-based products] can instantly be better than meat. You can improve the nutritional profile by having more amino acids, for instance, or adding a fat system that doesn’t have any saturated fat. We have been discussing adding fibre.

That’s the potential of plant meat,” said Mićković. “I’m sure further down road […] plant-based meat will start challenging animal meat, saying, ‘Can this be even better than it is now? Do we need to copy animal meat or can we be even better?’

Clean label or not?

The start-up aims to have an “all-natural” product on supermarket shelves made with clean label ingredients. Currently, however, its filet mignon contains methylcellulose as a binding agent.

Methylcellulose is approved by the European Food Safety Authority (EFSA) and the Food and Drug Administration (FDA) in the US, and features in the plant-based burgers of Impossible Foods and Beyond Meat. However, its chemical-sounding name and manufacturing process – it is a water-soluble polymer chemically modified from natural cellulose by partially etherified it with methyl groups, according to Food Additives – mean it is not considered clean label by many consumers. For Mićković, the additive is not a significant problem.

“I don’t think [the inclusion of methylcellulose] is a big barrier to uptake. It’s a barrier for a small group of ppl that are very much into clean eating. On the other end of the spectrum, you have the carnivores, people who will recognise every tiny detail that is not exactly like meat, and so it won’t be good enough. But I think most people either don’t care or don’t […] consider it to be a problem.

“Any kind of supplement or vitamin is normally wrapped in methylcellulose because it’s a perfectly natural, biodegradable compound. But ingredients have their own reputation and there’s nothing we can do about it.”

‘It’s not meat-eater versus vegan’

Although it is proudly plant-based, Juicy Marbles says it respects meat-eaters who are dismissive of the plant-based craze, and the company tries to engage with consumers on the issues that are fuelling interest in plant-based foods in an open and empathetic way, according to Mićković.

“Our food systems took millennia to form and here we are in the past few years, pounding on tradition saying, ‘We need to change course.

“We don’t want to be judgmental with people that eat meat or dismiss the validity of plant-based. It’s not an easy concept to accept and we can also forget that we are in a bubble of people who are receptive to plant-based but there are a lot of different people out there, raised into a system where meat is the primary meal.

“We want to find commonality between all of us and help create an inclusive system, where omnivores and vegans aren't pitted against each other. Our goal is the same, living on a habitable planet,” he added.