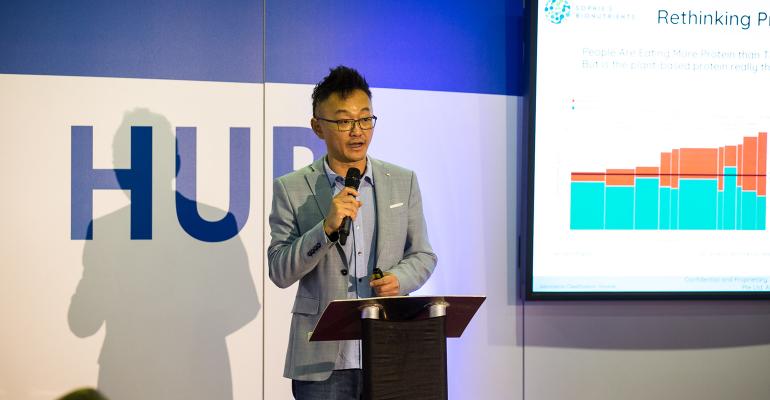 The sixth edition of the Fi Global Startup Innovation Challenge, hosted during Fi Europe, gave startups the opportunity to pitch their ideas to a jury of R&D experts, investors, and major F&B industry company representatives. Sophie’s BioNutrients took the award in the Most Innovative Plant-Based or Alternative Ingredient category for its pioneering work in microalgae.

We spoke with the company’s founder, Eugene Wang, about the huge potential of microalgae, his ambitious plans for the future, and how Europe is leading the way towards a sustainable, circular future.

“There were so many great technologies and startups at this competition,” says Wang. “I really didn’t expect we would win, but we did, and I’m very glad. An award like this is recognition of what we are doing, and really helps us to have a prominent position in the industry. At Fi Europe, there were lots of buyers, distributors and trend spotters on the show floor, and an award like this brings us more visibility and publicity.”

Born and raised in Taiwan, Wang initially wanted to be an investment banker or a management consultant. After completing an MBA at Columbia in New York City, he spent a year in the world of consulting, before finding the long hours too punishing.

“It was brutal!” he says. “So, I went back to Taiwan, where my family business is vegetarian food and found my passion.”

A little later, Wang found out that his daughter, Sophie, was allergic to shellfish, which spurred him to develop plant-based seafood alternatives. This led to the launch of his first company – Sophie’s Kitchen in the US – which developed B2C plant-based products.

“Some customers would point out to me that they had come to seafood for health and environmental reasons,” recalls Wang. “This made me realise that any plant-based alternative really needed to be even better. This is how I got into microalgae. The more I researched, the more I realised that microalgae could be a viable plant-based alterative for numerous sectors, not just seafood.” 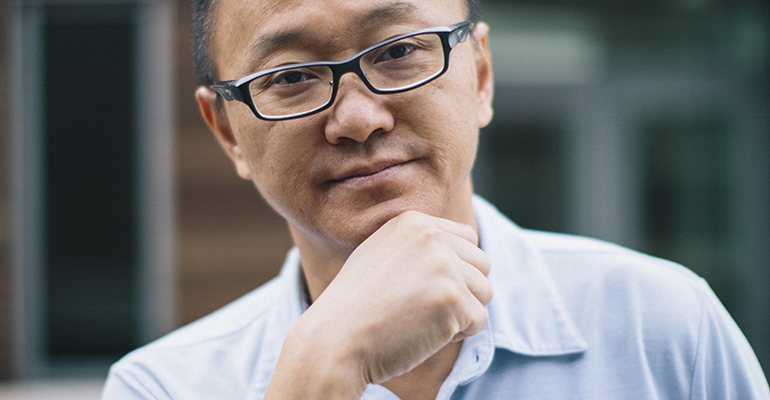 Indeed, while plant-based protein is an important means of meeting growing global demand for protein, Wang notes that it is not the silver bullet. Soy, whey, and chicken egg protein are the three protein sources most widely used by food manufacturers.

“We know that cow’s milk and chicken eggs are not sustainable, and even soy is unsustainable in the long term, if you think about rainforests being cut down to make room for crops,” he says.

Fermenting microalgae on the other hand takes just three days, compared to the 60 to 90 days needed to grow soy. It also feeds on food waste, thus contributing to the circular economy. Energy and space requirements for growing microalgae are also far lower.

To find a way of industrialising this potential, Wang and his team got to work, trialled over 1 200 strains of microalgae before identifying four strains capable of growing in the dark. These strains are also sturdy enough to be fed food waste, to produce a light, flavourless protein flour. This success led to the creation of a new B2B food tech startup called Sophie’s BioNutrients – the first fermentation operation was started in Singapore in 2017, thanks to a government grant. Sophie’s BioNutrients became a standalone business in 2019.

“What really differentiates us, I think, is our focus on functionality,” says Wang. “This is the thing most relevant to manufacturers. We have successfully turned our protein flour into milk, cheddar cheese, cheese spreads and alterative meat. We currently have six provisional patents and are in the process of filing more.”

Interestingly, Wang sees the company’s future as being firmly in Europe. He views the Startup Innovation Challenge award as a validation not only of his innovation, but also of his hunch that Europeans, and European businesses, understand the importance of sustainability.

“In Europe, sustainability is already part of the lifestyle,” he says. “This was a deep discovery for me, and one of the reasons why I made the choice to move here. I’ve been in the Netherlands for three months now, and our plan is to set up an R&D centre as well as a commercial-scale production plant. We want to make Europe our home because we see this as our future market.”