Going beyond the logo for sector-wide sustainability 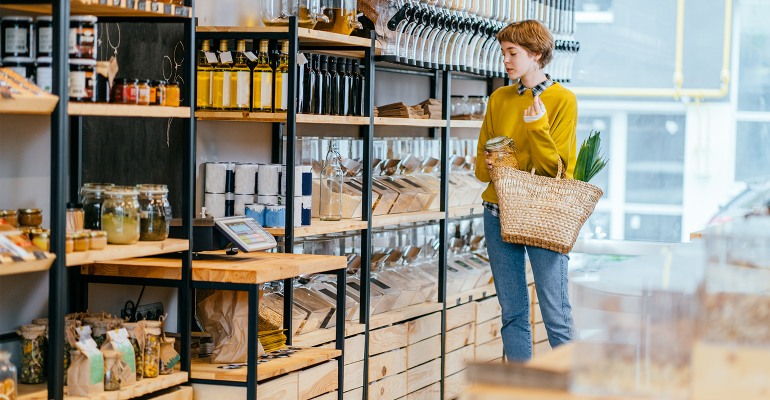 Food and drink packaging is crowded with ethical labels and CSR logos but their efficacy in bringing about sector-wide sustainability has plateaued at around 4% of market share. It’s time to put the onus on manufacturers, not consumers, says the executive director of Solidaridad, Jeroen Douglas.

The average consumer spends no more than four seconds looking at a product’s packaging on a supermarket shelf, according to Dutch brand packaging agency BrandBuilders. When a package does catch a consumer’s eye, the sustainability logo is just one element of information that is taken into consideration. The price, perceived taste, ingredient list, and ingredient origin are also important factors. The amount of time spent considering sustainable certifications is therefore likely to be much less than four seconds.

Canadian researchers at the University of Guelph used eye-tracking technology to determine the degree to which people looked at different elements of the packaging. They found that less than half of the people even looked at a label while most of those who did look did not change their initial choice.

“It may be tempting to try to give consumers more and more information in order to ‘improve’ choices,” concluded associate professor and chair in food system leadership at Guelph, Michael von Massow. “However, the evidence suggests that it doesn’t work. In my view, adding more information may actually reduce the amount of information that consumers take in. We need to think long and hard before we add more labels. We’re likely better off actually removing some labels.”

“It's even unethical to ask the end consumers to make that decision nowadays, so I'm against product labelling at this stage in mature markets,” he told Fi Global Insights. “One higher level up, where the category managers are, [is where] the job needs to be done. In principle, all products on every retail floor should be sustainable. I don't think we should give consumers the choice.”

“Frankly speaking, we are still stuck with the main problems in some of the commodity supply chains. The labels haven't brought the breakthrough for the items of sustainability that we are fighting for.”

Making sustainability a reality: The pyramid of change

While sustainability labels have played an important role historically, their potential to drive systemic change has reached its limit, said the executive director.

Solidaridad is taking a different approach that it represents with its ‘pyramid of change’. This pyramid forms the basis of its multiannual strategy to achieve sustainable practices across global supply chains and commodities from palm oil to gold, bananas to cotton. 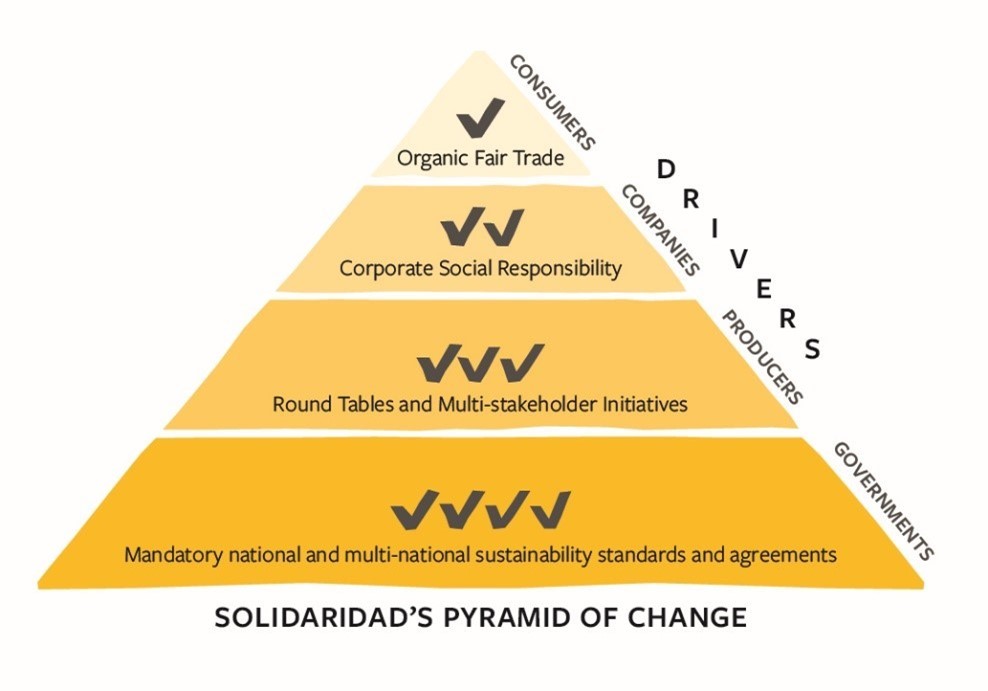 The top of the pyramid is made up of consumer-centric voluntary labels, such as organic and Fair Trade; the second tier is made of company-driven Corporate Social Responsibility (CSR) initiatives; and the third tier is producer-led round tables and multi-stakeholder initiatives that seek to instigate sustainability at a sector-wide level, such as the Roundtable on Sustainable Palm Oil (RSPO). The fourth tier is government-led and includes mandatory national and multinational sustainability standards and agreements.  It is this fourth tier that reaches the biggest volumes and has the greatest potential for large-scale change, according to Solidaridad, and where action must now focus.

Solidaridad was a founding member of the Fairtrade movement and Jeroen Douglas helped found three roundtable associations – the Round Table on Sustainable Soy (RTRS), the Global Roundtable for Sustainable Beef (GRSB), and Bonsucro for sustainable sugar. He is therefore well-placed to see the benefits and limitation of each tier.

That said, the situation is more nuanced than simply removing sustainability labels everywhere, Douglas admitted. Although on-pack labels have lost their strength in mature markets, such as western Europe, Douglas said he does see opportunities in emerging markets like China and Brazil where there is less experience in “connecting sustainability throughout the supply chain”.

Even in these markets, however, the labels will still only be relevant for a small percentage of consumers willing to pay a premium while government-led action could have further-reaching impact.

Mandatory systems include national standards and regulatory frameworks such as the EU’s Green Deal and Due Diligence Directive.

The Due Diligence Directive, for instance, would require companies to identify and – where necessary – prevent, end, or mitigate adverse impacts of their activities on human rights, such as child labour and exploitation of workers, and on the environment, such as pollution and biodiversity loss.

What does this mean for manufacturers who may be operating in many different countries and jurisdictions? Douglas said brands must respect mandatory regulations – this goes without saying – and follow due diligence. But they should also look to implement a “smart mix” of both mandatory and voluntary systems, he added. This creates brand value by showing their customers they are not simply opting for the minimum bar.

Indonesia is the world’s biggest palm oil producer, responsible for around 60% of global production, and millions of smallholder farmers produce around 38% of the country’s palm oil. However, the commodity in Indonesia has become synonymous with major habitat loss and pollution due to deforestation and the burning of peatlands to clear land for plantations.

Most deforestation linked to palm oil has historically been driven by large-scale producers, however smallholders are increasingly identified as important actors in deforestation in Indonesia, according to a Climate Focus and Meridian Institute report. The role of smallholders is also expected to grow as they are pushed into ecologically sensitive areas, it says.

Most of Indonesia’s production goes to local consumption or is exported to India, where it is used as a cheap cooking oil by consumers who are unable to pay a premium for certified oil bearing a sustainable logo.

“I think if [companies] really want to behave more sustainable, they should also, in their purchasing, try to reflect a good balance between purchasing from large farms on the one hand and clusters of smallholders on the other hand. I think then they are doing a better job not only business wise but also for the world,” Douglas said.

Can industry be profit-driven and sustainability-focused?

Does this mean manufacturers should be willing to cut into profits by sourcing certified sustainable commodities even when they cannot pass on the premium to consumers?

“I'm too long in this business to be naïve,” said Douglas. “In practice, companies are profit driven. Nonetheless, there is an emerging movement indeed, and that tries to put a third pillar of sustainability to large industry. This ‘B Corps thinking’ and the move towards stakeholder models rather than shareholder models is slowly, but certainly, emerging.”

Douglas said he feels more optimistic about the possibility of meaningful change coming from family-run or privately-held companies rather than those that are accountable to shareholders.

In the past, for instance, Unilever, has been praised for making sustainability a priority in its sourcing and portfolio – but it has also attracted some criticism from the financial world. In a scathing open letter, fund manager Terry Smith said the manufacturer had “lost the plot” and that it was labouring under the weight of a management obsessed with “publicly displaying sustainability credentials at the expense of focusing on the fundamentals of the business”.

The Solidaridad executive said: “The anonymity of the financial markets is a serious obstruction for sustainability because you don't feel the farmer behind the product; you don't even feel the product behind the dollar. Making things more transparent, IT solutions for fair data sharing can be methods to ensure that we are gradually changing.”