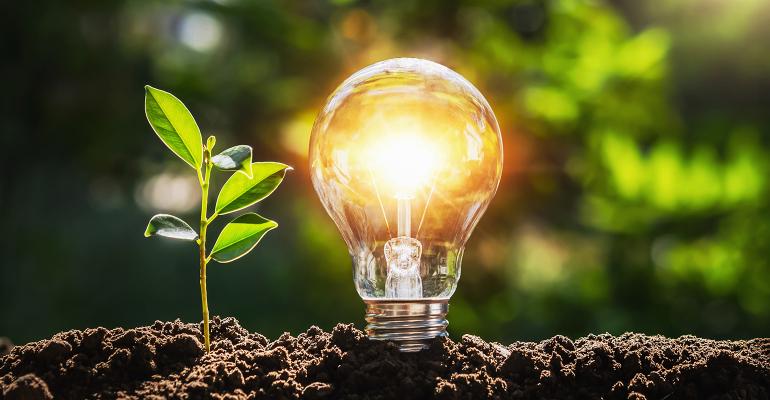 Starting with their own operations, manufacturers are employing technological innovations to reduce energy consumption, improve efficiency and cut waste, and optimise logistics.

Greening operations is not a new challenge to European food and drink manufacturers. According to the trade association FoodDrinkEurope, the sector reduced its GHG emissions by 12% between 2008 and 2017, while increasing production value by 5% during the same period. Many have taken a life-cycle approach to reducing the environmental impact of their products.

A lot of work remains, however, if temperature increases are to be limited to 1.5 degrees above pre-industrial levels (as per the Paris Climate Agreement) and if the Sustainable Development Goals (SDGs) are to be realised — notably SDG 13 on climate action, SDG 12 on responsible consumption and production, and SDG 7 on affordable and clean energy.

In January 2020 the European Parliament adopted the European Green Deal, a growth strategy to deliver a prosperous, climate neutral economy by 2050. In March the European Commission launched the Circular Economy Action Plan, which aims to facilitate and encourage the circular use of materials, products, and waste. Both of these roadmaps have been endorsed by FoodDrinkEurope, which has developed campaigns and toolkits to help its members meet sustainability targets.

"We must use our natural resources more sustainably if we are to live within our planetary boundaries and achieve carbon neutrality by 2050," said Laura Degallaix, Environment Director of FoodDrinkEurope. "The food and drink industry has some world-leading innovations that will support the [Circular Economy] Action Plan."

Recent projects to improve operational sustainability give strong indication of the direction manufacturers will take, as they set about meeting their own tough targets and those laid down by the European Commission.

One way to significantly reduce GHG emissions is to reduce energy consumption in factories. This means up-grading equipment to energy efficient models, ensuring that operations run at optimum efficiency, and reducing down-time — both planned and unplanned — to a minimum.

New technologies have been introduced for production plants to be cleaned more quickly, thoroughly, in situ, and at the right moment to maintain productivity and avoid outages. A partnership between the University of Nottingham in the UK and equipment supplier Martec of Whitwell led to the development of artificial intelligence sensors embedded in machinery, which inform operatives when a cleaning cycle is needed.

In a similar vein, in 2018 Coca Cola Europe invested €900,000 in electro‑chemical activation cleaning at its plant in Ploiești, Romania, resulting in an annual reduction of 2,730 MWh in energy used and a 870 tonne reduction in carbon emissions — as well as savings of 18,000 m3 of water and 100 tonnes of chemicals each year.

Another way of reducing energy consumption is to use the waste outputs from one part of operations to power another. For instance, Unilever installed an anaerobic flotation reactor at its Ben & Jerry's factory in the Netherlands, using waste from ice cream production and wastewater from cleaning to create biogas, which is then used in the factory’s GreEnergy project for insulating water during the production process. A similar installation at Mars' factory in Veghel, the Netherlands, results in in a reduction of 25,4 TJ in energy consumption each year and 1.5 kton of carbon emissions.

At Kellogg's UK factories in Manchester and Wrexham, energy is recovered from the wastewater treatment systems and exhaust systems on cookers respectively; in both cases it is used to (pre) heat water, resulting in combined energy reductions of over 3,700 MWh. 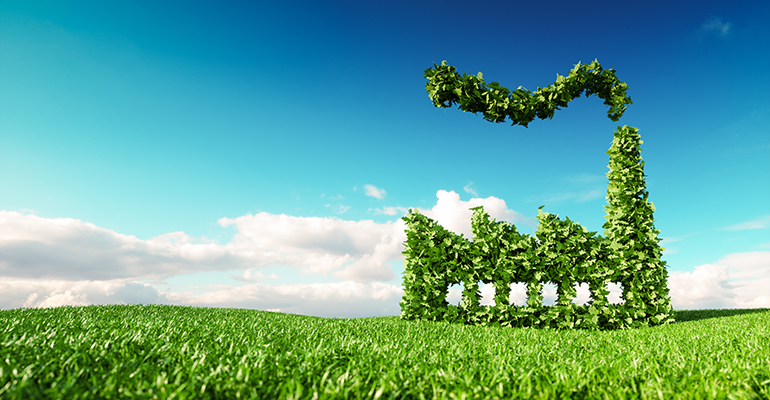 Food manufacturers can also slash their carbon emissions by removing coal from their energy mix and replacing it with greener alternatives, such as biomass, hydropower, wind and solar energy. This calls for investment in renewable energy infrastructures in areas where access to electricity is limited and working with energy suppliers to enable scale up of technological innovations.

The energy needs of Mars' 70 production sites in the US are covered by a 25,000 acre wind farm in Texas called Mesquite Creek, with a similar project for its 6 sites in Mexico. Similarly, General Mills signed a 15-year PPA with Roaring Fork Wind, LLC, a joint venture partnership between Renewable Energy Systems and Steelhead Americas, for 200 megawatts (MW) of its Maverick Creek wind project in central Texas. Together with the company’s previous wind power agreement, General Mills now has energy credits equal to 100% of the electricity used annually at its domestic facilities.

Kellogg, meanwhile, has conducted a global renewable energy assessment with a third-party to determine the technical and financial feasibility of renewable power in each of its markets. Amongst the innovations realised, its plant in Taloja, India has installed solar panels, which are already delivering 10 percent of the facility’s power requirements.

The Food and Agriculture Organization of the United Nations (FAO) estimates that one-third of all food produced for human consumption globally goes to waste, and a significant proportion is lost in the supply chain. Global food wastage is responsible for around 8% of total GHG emissions from human activities; rotting food in landfill emits methane into the atmosphere, and toxic leachates into groundwater sources. As well the environmental impact, waste constitutes poor resource management and lost revenues for companies.

FoodDrinkEurope has made food waste one of its flagship issues, as Sustainable Development Goal 12 targets a 50% reduction in food waste by 2030. The trade association has published a toolkit for manufacturers to maximise resources, including optimising manufacturing processes, training employees and finding new uses for leftovers.

PepsiCo is among the companies that have made a waste reduction commitment. All 25 of its European manufacturing facilities now send zero waste to landfill, an achievement brought about through effective measurement systems, operational efficiencies, and strong engagement with employees.

Waste reduction also means finding new ways to exploit by-products — such as for energy production, as above, by sending hulls, husks and peels to farms as animal feed, or by exploring ways to 'upcycle' them to extract value as an ingredient for human food and beverages. Kellogg's, for example, sends its imperfect or over-cooked Corn Flakes to a local brewer, to replace some of the wheat used in IPA beer production. 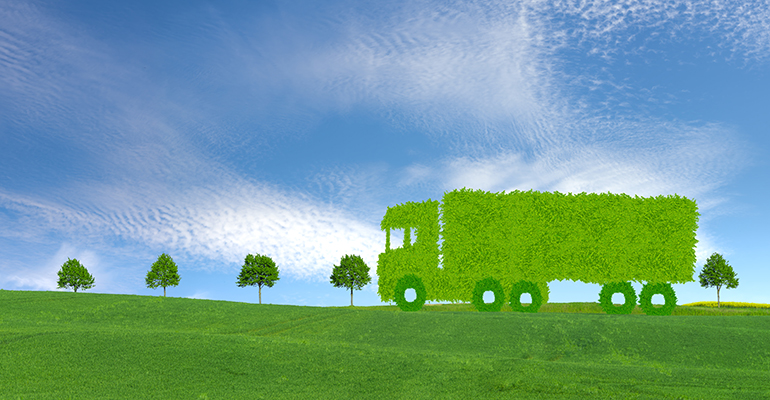 Transport and logistics can account for a big share of food manufacturers' environmental impact because their activities are often dispersed across a large geographical area, to be close to input sources and ensure market coverage.

The UK's Food and Drink Federation has published a 10-point checklist to encourage fleet operators to adopt more sustainable practices. These include prioritising transportation by train or ship wherever possible.

General Mills, for example, combines shipments for Green Giant Sweetcorn, Old El Paso, and Nature Valley, all of which are manufactured in south west France or northern Spain, sending them by sea from the Port of Bilbao to Liverpool.

Other tips from FDF concern reducing the impact of road haulage where it cannot be avoided, such as for small loads and the final stage of a journey. How a vehicle is loaded, how it is driven, and how it is maintained can all make a difference, as can use of modern vehicles that comply with the latest EU emissions standards and run on alternative fuel.

Britvic is one company that set out to green its road fleet, aiming for 10% electric and alternative vehicles by 2020; by 2019 it had already reached 18%, with 30% of new vehicle orders for hybrid vehicles. Average CO2 emissions across Britvic's fleet are now 103 g/km.

Off-site ― or rather, between sites ― optimising distribution routes contributes to emissions reduction. Telematics and tracking can recommend the best routes during a journey, while software can pre-emptively create the shortest connections between goods and customers, saving distance, costs and CO2. Südzucker uses software to optimise distribution between its 25+ factories and refineries, warehouses, and delivery destinations.

According to a white paper by Coca Cola Europe and Cranfield University, big data, block chain, and the Internet of Things enable tighter operations and resource savings, revolutionizing quality assurance and efficiency. For instance, Coca Cola Europe established an Automated Storage and Retrieval Warehouse at its Sidcup site in the UK, resulting in a reduction of 10,000 road miles (16,093 km) per year and 3,800 tonnes of CO2.