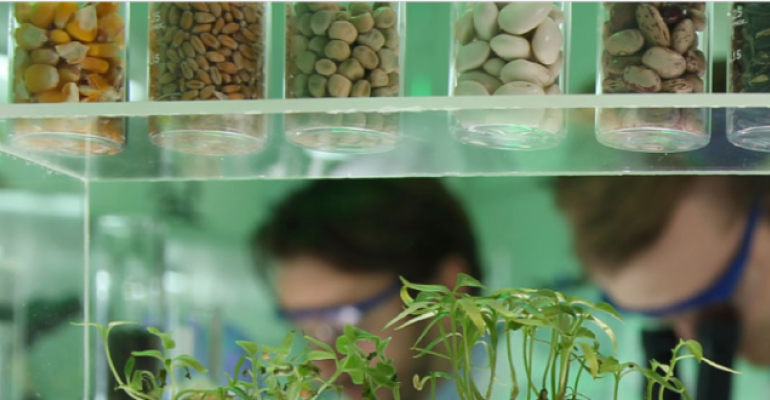 Ensuring a sustainable food supply without genetically modifying plants has come a step closer with a computational breeding technology that identifies seeds with the highest nutritional potential. This means farmers can produce more high quality protein with less land.

The Israeli firm combines proprietary algorithms and bioinformatics methods to screen plants for desirable traits, and then combines this data with traditional non-GMO breeding techniques. This approach speeds the breeding process significantly, allowing it to rapidly identify the potential of plants from an agronomic perspective, as well as a nutritional one. The company says its work with pulses means farmers can produce more high quality protein with less land – a crucial issue when it comes to maintaining a sustainable food supply as the global population grows.

“Without having our technology it’s almost impossible to influence these complicated traits because they are influenced by multiple genes,” said Equinom CEO Gil Shalev. “We have the ability to impact the amino acid profile. Once the industry does a big conversion to alternative proteins, the next question is the protein quality…We are focusing our varieties to give the best composition for human consumption.”

Shalev says the company’s high protein peas contain about 28% protein, compared to the usual 15-20%, and are intended to be grown in Canada, the world’s biggest pea-producing country. They are due to be available commercially by 2020, while high protein chickpeas should reach the market by 2021, and other pulses like mung beans, fava beans and lentils by 2022. Peas have been the initial focus for development because the market for pea protein is already well-established, but the high protein content itself is just one aspect of interest for industrial use, as different pulses have different functionalities.

“In each species there are benefits for different attributes,” Shalev said. “In mung bean it’s an excellent protein for gelation. Chickpea is excellent for foaming, high solubility and natural taste.”

A gene bank of alternative proteins

The company started working on its technology six years ago and last year attracted a $4 million investment from Israeli private equity firm Fortissimo Capital. While the world’s largest seed companies have tended to focus on commodity crops like soy and corn, Equinom decided to focus on smaller but potentially important crops that could generate grants of $1-10 million, Shalev explained. It has already developed a sesame crop with a higher level of oil that can be harvested using a combine, rather than by hand, for example – a development that could transform the $8 billion global sesame market. This crop is already in a pre-commercial phase in the U.S. and Australia and is set to hit the market in 2019.

In addition, Equinom has been building a network of food and ingredient companies to work out their specific requirements for protein ingredients and to try its pulse flours in products.

“We are going to establish a gene bank of alternative proteins,” Shalev said. “We are also adding the agronomic parameters. We believe the more data we will collect, the more ability we have to solve problems.”

Importantly, the company aims to break the link between crop yield and total protein, meaning that its pulses produce more protein per square metre, thereby keeping costs down. Among future projects, it is also considering the potential of non-GMO soy protein, which is used by many food manufacturers working in the plant protein and meat alternatives sector.

“The advantage of our product is it gives you the ability to improve the seeds without using GMO seeds,” Shalev said. “In Europe, we see there is zero tolerance for GMOs. For the market of tomorrow, we think we could be an alternative to GMO crops, particularly in Europe.”