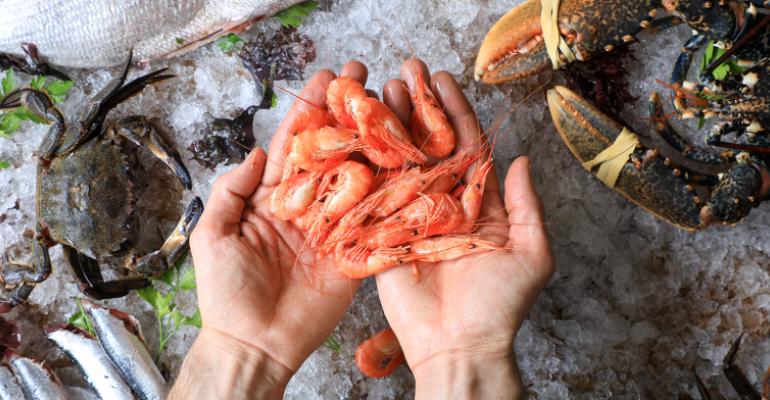 Today, almost all shrimp farming happens in subtropical and tropical coastal ponds. The shrimp are harvested, frozen, and exported around the world. However, developments in vertical aquaculture promise to transform production into a local affair, allowing consumers in regions where the climate prohibits conventional aquaculture to eat fresh, locally grown seafood.

Vertical Oceans is one such company working to disrupt the global $28 billion shrimp and prawn industry. The company was founded by John Diener, who used to be managing director of Gold Coin Aqua Group, a tropical marine aquaculture company focused on shrimp and tilapia nutrition and genetics.

“I visited hundreds of shrimp farms in the region and I kept seeing the same pattern over and over again. I would see the ponds and they would pump raw effluent in the oceans, suffering cycle after cycle of disease and other problems, and they just never made the connection between the negative environmental impact and the negative results on the farm,” Diener said.

“It seemed illogical to me and it irritated me that there wasn’t more effort to use more sustainable methods. There certainly are exceptions to that but the significant majority of what I saw was pretty negligent from an environmental perspective. I knew that aquaculture could be a sustainable and efficient way to produce food – even the most sustainable – just not the way it was done. I also knew that technology could solve this problem.”

Diener teamed up with Enzo Acerbi, a computer and data scientist with a background in nutrition, genetics and microbiology, to help develop the technology required and Vertical Oceans, previously called Aqualogix, was born.

Dienor told Fi Global Insights: “We quickly realised that we weren’t just improving shrimp aquaculture, we were completely re-inventing it. Vertical Oceans is a vertical aquaculture system for sustainable, same-day, farm-to-fork seafood [produced with] no chemicals or antibiotics and with the ambition to be the most sustainable way to produce seafood.”

The start-up is currently preparing patent applications and so cannot divulge much information about its production process. However, Diener described its system as being built on three technology ‘stacks’.

The first technology stack is biological and its primary feature is a multi-trophic system whereby the waste from one species provides the input for another. Vertical Oceans’ tanks are not just filled with shrimp, but also fish and seaweed, which play an important role in taking up the organic waste created by the shrimp and converting it into harvestable biomass, thus reducing waste and improving the ecosystem health.

The second technology stack is mechanical, comprised of a vertical production system that can be built upwards, thus using less land. It uses an artificial lighting system running on a day-night photo period that the company says is less energy-intensive than those used in vertical farms to produce greens.

The third stack is digital, centred on sensor devices that feed information into algorithms, which then control and optimise various elements, such as feed and energy, ensuring the entire system runs as efficiently as possible.

Vertical Oceans already has a pilot plant at the Marine Aquaculture Centre on St. John’s Island, south of Singapore, and completed its first trial harvest around two weeks ago, supplying several restaurants in the city-state.

It is currently working on engineering a scaled-up commercial facility capable of producing 1,000 tons of seafood a year. For this, Diener and Acerbi estimate they would require 5,000 square metres of land in a facility around 15 stories high. 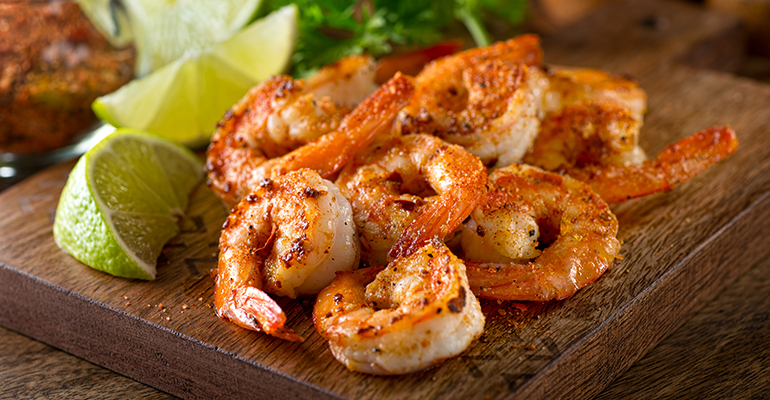 The benefits of a multi-trophic ecosystem

According to a WWF report on the environmental performance of Southeast Asian shrimp farms, shrimp aquaculture has contributed significantly to the degradation of natural resources and ecosystems.

Coastal habitats that were once sanctuaries and breeding grounds for marine life have been cleared for farms, which pump huge amounts of nutrient and chemical waste into the seas, polluting the water. Ponds also tend to be overcrowded, which spreads disease, and antibiotics are routinely used.

Vertical Oceans claims that, its aquaculture system is “as good as it gets” in terms of animal welfare.

“One of the benefits of having a multi-trophic system, particularly with the species of fish and seafood we have chosen, is you end up creating a more balanced ecosystem,” said Diener. “The overall conditions in the water […] are much better than if you were just monocropping the same species, adding feed, and having organic matter build up at the bottom of the pond [creating] lots of bacterial activity, and so forth.”

“We are working on building a healthy ecosystem and a healthy microbiome. Basically, by having multiple species in there, you end up with better microbial diversity and this creates a healthier environment. So, the overall water conditions are much better than what you would find in a typical pond-raised shrimp aquaculture environment.

“In terms of feed and general conditions, it is as good as it gets,” he added. “For us that’s important because the best way to respect what you eat is to treat it with respect while you grow it and while you consume it by not wasting it.”

Vertical Oceans is cultivating L. vannamei shrimp, also known as Pacific whiteleg, and is in the process of trialling various species of algae. One species that looks promising is sea grapes. Considered a delicacy in Japan, sea grapes have an impressive nutritional profile, with a high omega-3 content, and very efficient in taking up nitrogen, making them a useful addition to Vertical Oceans’ multi-trophic tanks.

Vertical Oceans describes its produce as “same-day, farm-to-fork shrimp” and, because it only supplies the local market, does not need to add preservatives to the shrimp once harvested.

“It tastes like wild caught, fresh shrimp and that is our target,” said Diener. “We are not trying to compete against farm-raised shrimp, we are trying to replace wild-caught shrimp […] which tends to have more seafood, umami flavour notes than farmed shrimp, which can be bland or even muddy because of the environment they are raised in.”

The start-up is targeting urban consumers who are interested in sustainability and food quality and safety.

Diener did not reveal the shrimp density in the tanks but said it is working to find the optimal number, adding that the company would, in the future, like to invite consumers to come and see how its shrimp are raised in the future in order to increase transparency and build trust.

It is also looking into using plant-based or microbial protein in its fish feed, deliberately avoiding fish meal and wild-caught fish oil because of the inherent unsustainability, Diener says.

According to UK non-profit organization, the Marine Conservation Society, which produces a Good Fish Guide to help consumers make more sustainable seafood purchases, the use of untraceable fish feed sourced from fishmeal and fish oil, is one of the most critical concerns regarding prawn farming.