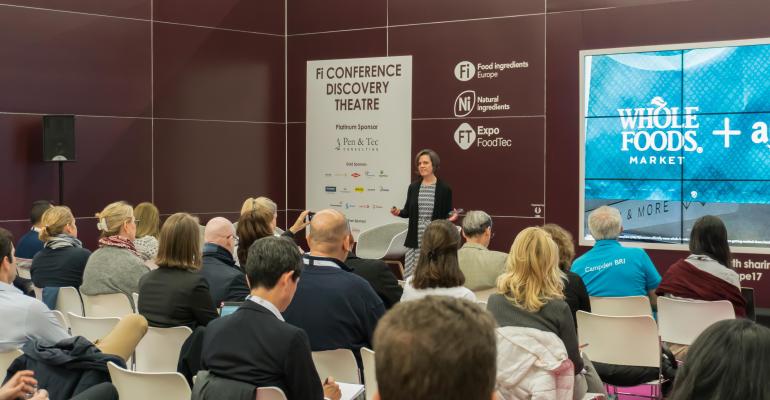 According to IBM Research technology companies are helping major food companies gain an advantage over competitors through product differentiation.

Tech giant IBM may not usually be associated with the food industry, but Robin Lougee, research industry lead for consumer products and agriculture, explained that its technological innovations have the potential to revolutionalise product development and more.

Speaking at the Fi Conference in Frankfurt, she used the hot competition between Walmart and Amazon to illustrate her point. When Amazon gained a bricks and mortar presence with its acquisition of Whole Foods earlier this year, it immediately lowered prices and attracted new customers -- one in four of whom came from Walmart.

Walmart realised that product differentiation could be a strategy to fight back, so it developed a special product that is only available in its stores -- Tropickles, fruit punch flavoured cucumber pickles that are based on a regional speciality from Mississippi. To develop Tropickles, Walmart had hundreds of its employees visit the lab to take part in taste tests, but using new technologies could have speeded up and simplified this process.

"I believe this clash of retail Titans is a bell-weather for the food and beverage industry," she said, as technology can play a central role in the battle for differentiation.

Lougee provided several examples of IBM technologies, based on big data, artificial intelligence, blockchain, the Internet of Things, and quantum computing that are already showing potential for food product development.

With the trend towards personalisation there is a need for better understanding of nutrition -- yet data is sorely lacking. IBM is working on visual recognition of food, which will yield data to train AI to recognise beneficial nutritional content.

Teaching computers to be creative

IBM is also using computers to augment human intelligence through its 'Chef Watson' system, which Lougee called "a new era in AI for cognitive discovery". While Watson has its own cookbook, it is also being used with companies to develop recipes by shifting through sensory and olefactory pairings. One of Watson's first clients is Bear Naked, which enables consumers to develop their own, customised granola recipe from over 50 different ingredients.

Blockchain, a technology borrowed from the financial industry, has considerable potential to improve food safety and transparency. A group of the world's leading retailers and food companies are working with IBM to explore how blockchain technology can be used to make the food supply chain safer. Blockchain technology can be used to improve food traceability by providing trusted information on the origin and state of food.

The baseline of normal

Together with Mars, IBM is leading a consortium of companies focusing on surveillance, risk assessment and diagnosis of food borne pathogens. It is taking on a big bioinformatic challenge -- using the microbiome to figure out "the baseline of what normal looks like".

Understanding food at a molecular level

"When processing new foods, we need to understand these foods at a molecular level," Lougee said.

Traditional computers are limited in this respect, but one of the first applications of the IBM Quantum Computer involves molecular modelling. The Quantum is a promising technology for drug discovery, but it can also be used to understand the molecules needed to develop foods and nutraceuticals for specific purposes.