FUMI Ingredients has developed a processing platform to produce animal-free food ingredients, from micro-organisms that have very similar characteristics as egg-whites. Watch this on-demand webinar to learn more.

The specific solution is to transform micro-organisms such as yeast or micro-algae into chicken-free egg-whites. This vegan egg-white can be applied as emulsifier, binding or foaming agent in, for example, bakery products or meat replacers. 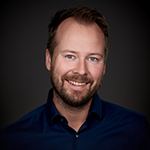 Dr. Corjan van den Berg holds a Bsc in Food Technology, Msc in Biotechnology and received his PhD at Delft University of Technology in 2010 on Process Technology, which he performed at the Netherlands Organisation for Applied Science (TNO). After his postdoc, he worked at Purac (now Corbion) as a project leader on lactic acid produced from lignocellulosic biomass. From 2011 onwards, he has been focusing on the topic of algae biorefinery, initially at TNO where he was the lead in building the world’s first mobile algae biorefinery, and from 2016 onwards he has been working as an Assistant Professor on the topic of biorefinery at Wageningen University.  He is currently CEO of FUMI Ingredients, which is developing non-GMO egg-white replacers based on micro-organisms. FUMI Ingredients are leading experts in the fractionation of protein ingredients from various single cell protein raw materials (ranging from yeast to algae).