“I’ve never found a professional challenge quite like working in China. It’s thrilling, complacency is never an option and it keeps me on my toes.” - Ellie Adams [Interview] 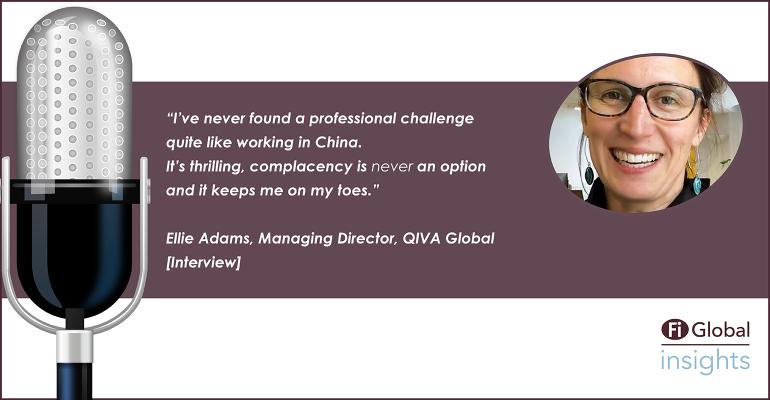 China’s food and beverage industry is among the fastest growing in the world. Research group Statista projects that by the end of 2021, the Chinese market will account for 63% of global industry revenue. Expert in the Chinese F&B space, Ellie Adams, Managing Director of QIVA Global, shares her insights and experiences as an entrepreneur in China and beyond.

This interview highlights the differences in business culture and operation between China and Europe and provides practical advice for overcoming barriers for international companies operating in China, and for those wishing to build a career abroad.

Ellie, you gained a wealth of experience working for Thomson Reuters and Monitor Deloitte. In 2017, you founded QIVA Global. Was it a difficult step for you to move from a corporate environment into entrepreneurial waters?

“Actually, the opposite. I never quite fitted the corporate mould and had been running QIVA on the side for years before taking the plunge – I am a big believer in having a side hustle – so there was never a big ‘drop off’ point. That said, I have found the experiences gained at both TR and Monitor Deloitte an invaluable source of learning and experience. These organisations attract such talented individuals, which is great for learning – particularly in those early years of one’s career. Another factor in all of this was becoming a mum. When you have children, you become less compromising with your time and I certainly found that once I had children, I had no time for office politics and climbing corporate ladders. My desire for an exciting and challenging career never went away when I had kids though – hence QIVA, which works me way harder than any corporate career ever has!”

What does QIVA stand for?

“There was an ancient caravanserai (roadside inns supporting the flow of commerce, information and people across the network of trade routes covering Asia, North Africa and Southeast Europe, most notably the Silk Road) called Khiva. Given my ambition – to establish a business that supported international businesses successfully do commerce in China – it felt quite fitting. But so as not to coin the name of what is now a city in Uzbekistan, I switched the KH for a Q, which stands for the first letter of my Chinese name, Qing zhu.”

You worked on various markets around the world – European, American, and Asian. Why did you choose to focus on the Chinese market? Was that a conscious decision or rather a coincidence?

“Yes, I’ve been enormously lucky and met wonderful people around the world. China for me is particularly special though, hence why it was a very deliberate move to set up QIVA.”

“I moved to China following my graduation with the intention of studying Mandarin. I ended up living with several Chinese families who helped me along the way to learn proficient Mandarin and instilled within me a great fondness for China and its people. However, I think the biggest factor in ‘why China’ is that I love professional and academic challenges … and I’ve never found a professional challenge quite like working in China. It’s thrilling, complacency is never an option and it keeps me on my toes.”

Were there any entry barriers you had to overcome before starting your own business in China?

“So many that I used to make records to one day look back on. I think that’s probably the same for any business, but one takes a level of confidence from having overcome the barriers that exist for international companies operating in China. It’s taken a lot of grit to get where we are today, but with it has come enormous pride and confidence too. And certainly, for our clients, many of whom are international brands, our experiences and learnings through that process are what help us make them successful today.”

What is the business culture like in Asia/China? Are there any common faux pas that the market ‘newbies’ commit when trying to enter it with their B2B or B2C services and products?

“Business culture is more hierarchical generally. I’d say there is a great willingness amongst Chinese companies to collaborate with non-Chinese businesses, but both sides have very different working styles and patterns which – fuelled by challenges in communication – can often lead to an erosion of trust in the intentions of both sides. Which is a shame. To circumvent this, I think there is something wonderful about not trying to too hard to be something one is not – Chinese partners do not expect their international counterparts to be Chinese, share business cards in a perfectly Chinese way, eat proficiently with chopsticks. It’s about melding the strengths of both sides and recognising that both have value to each other. Therefore, openness to dialogue, a friendly manner, and honesty go a very long way. I think that’s universal.”

What are, in your opinion, the most important elements of building an international career?

“I’d advise taking career risks at times in one’s life where you can. For instance, I have children now – my career for QIVA may look riskier than a corporate job, but it feels pretty sedate compared to some of the career opportunities I threw myself at in my younger years. Other elements include being able to form relationships effectively with people outside one’s culture of familiarity. Career building and business in general is people, so if you can forge good connections and relationships, topped off with a bit of gusto and daring, I think you’re on your way. And the first international job is always the hardest. The rest follow on.”

You speak fluent Mandarin – how long did it take you to master that language? What motivated you to learn it?

“It took me 18 months of pretending I was Russian (so as to avoid having to engage in any English conversation), living with Chinese families and relentless study. That just about did it. In terms of keeping it up, my Chinese partner and colleagues speak to me in Chinese, and I will use English, so we are all always able to command our strongest language while keeping up our second languages. This helps both with language, but also culture – everyone has the opportunity to communicate in their most effective language and get their ideas across as they wish them to be understood.”

Do you see any differences in the operating models between the Asian and the European companies working in the F&B sector?

“Many. I think Chinese businesses will generally view marketing as core of sales success, so invest heavily and treat it very seriously. The non-Chinese businesses I work with often approach it from the other angle – marketing can feel a bit of an after-thought. But Chinese businesses have such an advantage in the digital sphere which perhaps explains this somewhat. China has embraced digital technology and its customers are ruthlessly unforgiving of companies that do not adapt to this, so I think on this one…Chinese businesses are very well equipped vs. their European rivals. Other differences are around attitudes towards experimentation – Chinese companies I work with work on a constant cycle of testing and adaptation. The tempo also feels faster. For instance, you know your Chinese counterpart is not particularly interested in doing business with you if it takes more than a day to hear back from them. When Chinese businesses want to make a move, they rarely hang around in my experience.”

You must know the Chinese culture in and out. Is there something that you discovered that might be unexpected/unusual/surprising to a newcomer who wants to settle there?

“Not at all! I’m constantly learning. And that’s what I love about it. I am constantly being educated about things that I may have taken for granted or had not foreseen. For newcomers, I think it is the best test of tenacity and adaptation one could ask for. Go with an open mind and a kind heart and you’ll find many friends.”

We all know that the Chinese New Year is celebrated sumptuously. Do you have a favourite Chinese holiday?

“Well I spent a Chinese New Year with a dear friend and her family once. That was rather special. I felt a bit embarrassed to be encroaching on what was essentially my equivalent of a family Christmas, but it was so fabulous to be a part of the merriment and rituals around such family celebrations.”

“Aside from that, I absolutely love moon cakes – I have a real weakness for them and these are eaten during Mid-Autumn Festival. I once ate four in an evening though, which was definitely a mistake!”

Connect with Ellie on LinkedIn.