‘I left my well-paid job in oil and gas and took a jump into uncertainty. It's made me feel so empowered’ – Michelle Ruiz [Interview] 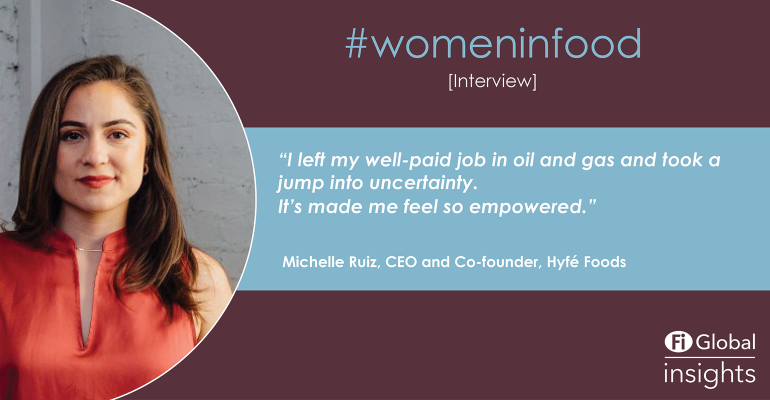 Michelle Ruiz is CEO and co-founder of Hyfé Foods, a Chicago-based startup that is producing high-protein and high-fibre flour for the baking sector made from mycelium.

What sets Hyfé Foods apart from other mycelium startups is its circular economy approach: the carbon- and sugar-rich feedstock it gives to the fungi is sourced from food manufacturers’ wastewater.

This nutrient-rich side stream, which is generated by almost all food factories that use water in their ingredient processing from tofu to potato chips, currently goes to wastewater treatment centres, where it is degraded into biomass and goes to landfill.

Hyfé Foods has identified a fungal strain that, when given this feedstock, produces a food-grade biomass that can be transformed into a neutral-tasting, low-carb, and gluten-free flour.

However, Ruiz did not set out to have a career in the food industry. A chemical engineer who worked at oil and gas giant ExxonMobil for nearly a decade, Ruiz developed bioengineering techniques for wastewater treatment and optimised factory processes before feeling inspired enough to take some of those learnings and co-found her own company. We spoke to her to find out more.

After nearly 10 years of working in oil and gas, why did you decide to pivot to a career the food industry?

"It was really when I went home during the pandemic and spent time working with my mom at home. My mom has pre-diabetes and my grandpa died of diabetes so [I know] that it's extremely difficult to manage the disease once it's there. It's not just logistically difficult to avoid foods that have refined carbs because they're everywhere but it's also emotionally difficult to have a restricted mindset.

“And if we can have the world's information in our cell phones, we have to be making food that is good for people. The stage that we've got to with the industrialisation of food, where we're cranking out food that will fill people's stomachs but make them sick at the end, should not be an acceptable standard in today's society. And wastewater treatment is such as archaic process too, it doesn't even have the [necessary] infrastructure.

“I thought 'I need to fix this food category for myself’. I figured out how to do that through this technical exploration of mycelium, but how [could I] make it cheap enough? Wastewater. It was a very non-linear path, but I think some of the best discoveries happen that way.”

Hyfé is a female-founded and female-led start-up. How do you think that influences your business strategy?

“It makes us a disruptor in many cases [...] and most of us came from industries that were very male-dominated - chemicals, refining, oil, and gas - and we're using those learnings to continue to disrupt and come to the market with a product that completely disrupts flour.”

"In addition to being a woman and Latina, I'm also an immigrant. I emigrated to the US [from Ecuador] and I think a lot of my resilience wasn't because of oil and gas, a lot was because my family literally left everything behind and moved to a new country and had to figure things out. My approach to business is, 'Ok, we are engineers and scientists, we have a pretty good read on market signals and technical signals, so we'll make ambitious goals, and figure out how to get there’. We don't have to have every [solution] in the moment], we just have to have a de-risked plan, and then manage that risk.

"Also, we're not just female-founded, we're an all-women technical team. Every single one of our hires - purely coincidentally – is a woman. I think part of that is because [...] we look different from the classic biotech startup, just by putting women in leadership, and it's as simple as that. If you put somebody that looks different in your leadership, people who look like that person or relate to that person's experiences are going to apply to your company.”

How receptive do you find the food industry to female-led companies?

"I think it depends on who you talk to. Not everyone's there, not even within the fermentation community, even though we're all disruptors. It's difficult sometimes and what helped me sometimes in oil and gas, [where] I was always the only Hispanic person and the only woman, was being really prepared on the technical side.

“The thing about being a woman in the technical space is, people don't believe you. They think you don't do math well, and even if they don't say it out loud, they'll ask you to double check things. I have learned to always be prepared. I always have my numbers right, I always practice my pitches, and I do very deep due diligence when presenting to a potential client because I need to look well put-together to be taken seriously.

“It's unfortunate that it's like that because a white dude can just stroll in with an air of arrogance and get the business he wants, but we have to do all this extra work. But that's the reality and I think it makes me a better business owner.

“At a pre-seed stage, having built prototypes in our basement, we had a fully-fledged techno-automatic analysis and people were shocked. We had everything mapped out.”

What’s the best thing about being in the food industry compared to the oil and gas or wastewater industries?

“It's so much sexier! But the best for me is, I can see this food making my family better. [...] If we were just doing wastewater, it would be cool tech, but I wouldn't have this deep personal connection, and my motivator is if I feel a fire inside.

“That gets me through these conversations where I am cornered or pushed aside because someone doesn't respect me, and I think, 'No, I'm going to open that door for myself.'”

Do you have one piece of advice for female scientists, engineers, or business leaders?

"The biggest pivot point for my career was starting this business. I took a huge risk leaving my comfortable, well-paid job in oil and gas that wasn't fulfilling or doing anything good for the world. I took a jump into uncertainty, and it's made me feel so empowered, [as if] I can do anything, and no-one is ever going to get in my way. So, my advice would be, if you're comfortable, it's time to get uncomfortable. That's how you will grow and learn to believe in yourself.”