‘I tell people who are asking for career advice: go into a startup! It's like a practical MBA’ - Giulia Braghieri [Interview] 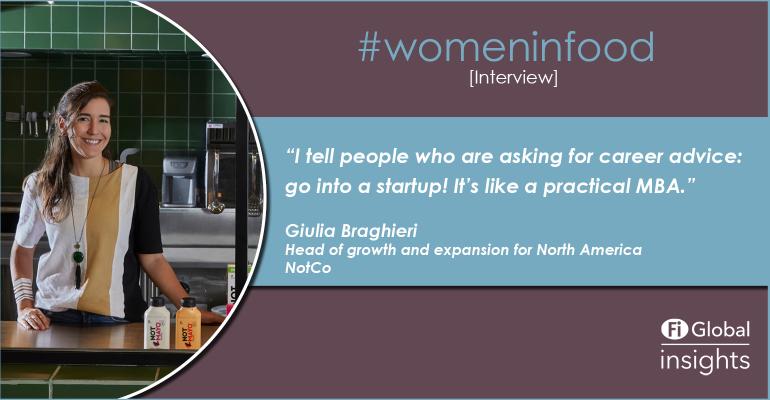 Chilean startup NotCo started out with plant-based mayo but has since expanded its range to include milk, ice cream and burgers, attracting high-profile investors such as Jeff Bezos and becoming a unicorn in the process.

The startup uses a proprietary AI tool to identify which plants can recreate the taste and texture of meat and dairy at a molecular level, leading to some interesting ingredient combinations. Its plant-based drinking milk contains cabbage and pineapple, for instance.

We caught up with Giulia Braghieri, head of growth and expansion for North America, to find out more about her journey. Giulia is a food engineer by training and has over 10 years’ experience in the food and beverage sector at major CPG companies like Danone, Mars, and Tetra Pak. For the past three years, she has worked on expanding NotCo’s presence throughout Latin America and North America.

Giulia, your decision to join NotCo was quite spontaneous. You were working at Danone Brazil and about to relocate to Danone’s offices in the Netherlands when, after an informal phone conversation with NotCo’s founder, Matias Muchnick, you decided instead to join NotCo and move to Chile. It was a life-changing decision. Looking back, was it the right one?

“Everybody asks me, ‘did you do a thorough due diligence before choosing NotCo?’ and, to be honest, I just went with my gut feeling. It felt right, the challenge and mission were incredible, the founder was visionary and extremely passionate, it felt like the right moment and I'm so thankful I listened to my intuition. NotCo was in the early stages; even though they had been around for three years, they were still only in Chile and with one category. The exponential growth was just about to start and I was able to be part of it, first row. It has been the ride of a lifetime!

“We only had Not Mayo back then and a team of about 30 people, and I was one of the first people that they hired that came from the [food] industry. It was a great moment to join the company, a soup-to-nuts experience! Three years in, I've worn multiple hats and had multiple functions in multiple countries.

“But what I really enjoy about NotCo is that things are extremely, extremely agile. Fast isn't even the right word to describe it! There's an expression in Portuguese where we say, ‘we changed the tyres while the car is moving’. At NotCo you're designing the strategy, but you're also executing at the same time, and you need to be quick to adapt. Put all of that speed together, fuelled by amazing mission and extremely talented colleagues and the sky is the limit.

“Sometimes I tell people who are asking for career advice on MBA next steps: go into a startup. It's almost like a practical MBA because you learn exactly what to do, what not to do, and what works if you ever want to open your own company.”

NotCo has been very busy in recent years: becoming a unicorn, partnering with Burger King for its plant-based Rebel Whopper and, most recently, signing a joint venture with Kraft Heinz. I’m sure there are many more projects on the horizon too. Do you find it difficult to juggle a work-life balance?

“I confess that, especially at the beginning of the pandemic, it was challenging for me to draw a line of when to stop working because the work and leisure environment were the same. Even more challenging when you work in a mission driven company and with other passionate people, you’re even more energized to do more. With time, I was able to balance and adapt, rediscovering many hobbies that definitely helped in the work-life balance like music and surfing."

You previously worked at Danone, Mars and Tetra Pak so you have experience in both the corporate and startup worlds. How did those experiences differ, particularly as a woman in business?

"The main difference in my personal experience is that, in big CPG you usually have robust and structured programs to support women in their career growth and reduce gender gaps, whilst in an early-stage start-up those initiatives don’t exist and with so much going on, it is not the top priority to be implemented at the start.

"I remember at Danone they had a variety of initiatives, from percentage goal of female leaders to longer paid maternity leave and other initiatives to reduce the motherhood impact on career growth. One of Danone’s core values was to be diverse and inclusive, therefore they worked to guarantee support to reduce gender and race gaps.

"At an early-stage start-up, on the other hand, these support elements might not exist at first (at least not in such a clear structured manner) but you can play an active role in influencing the company towards it. Also, as a plus, the types of things you are exposed to and the spaces you can occupy are infinite. There is always so much to do, so much untapped growth that the question becomes more ‘how do we prioritise’ and also ‘how to divide and conquer’. At NotCo, I had the opportunity to lead executive conversations, strategic projects, and many things that went beyond my job description that would have taken me years to have the same experience in a big CPG, even with all their robust support programs.

"Therefore, it becomes much more a question of ‘what experience do you want’ and ‘what mindset do you have’. If you have a strong entrepreneur mindset, [are a] self-starter, driven, resilient and curious, then a start-up is just the place for you. There will be emotional ups and downs for sure, and impostor syndrome will definitely come knocking on your door more often than not, but the clear impact you have on the business and the direction of the company, the speed to which you mature and the deep alliances you can forge, are priceless."

You’re Brazilian and have lived in Chile and other countries around the world. What is it like in Latin America for a female entrepreneur?

"Sometimes we view Latin America as one culture and that communication and business styles are very similar. But, after having lived in different countries and worked with various nationalities, it’s safe to say that being from the same region does not grant alike values and mindsets. In my experience, for example, Chile is more conservative and tends to do more local business, without a benchmark mindset and as a foreign woman, it was sometimes challenging to insert myself there as I was someone bringing disruption.

"As for Brazil, which is more open and informal, a lot of decisions tend to be made based on relationships and coffee informal conversations. Even though I am Brazilian and know the culture very well, I often felt without a seat at that table, especially when it came to more operational discussions where the majority were always men. That meant I had to work harder to reach the same results.

"Nevertheless, what is a common denominator to the region is how women entrepreneurs are still a minority. Take Brazil for example, only 4,7% of all start-ups are founded exclusively by women and they made only 0,04% of the VC investments in 2020. This happens even though research shows that female founders lead more profitable and disruptive startups.

"I had the pleasure of working over the last two years with an NGO called Female Force founded by Maya Capital, one of the few VCs led by exclusively women in Latin America that works exactly in this field. Female Force’s goal is to help more female entrepreneurs found and scale up their business by offering mentoring and providing the right connections. We see this all the time; women just don’t have access to the same circles that men do. It’s still a man’s world in Latin American entrepreneurship. But I am bullish this dynamic will soon shift, with more initiatives like this coming up and more amazing female leaders rising to inspire and lead the way for future generations."

"Definitely. Since a very early age, sustainability has been key to everything that I do. It’s part of my everyday [life]. Composting and recycling, biking as much as I can, reducing consumption of animal products among others. My friends who know me always ask as soon as they visit: ‘which one is the recycling bin?’

"It's a very strong value for me, and one of the reasons that I had such a strong connection with Danone and now NotCo. This is not a nice-to-have anymore, it’s a must-have and companies who are taking this seriously and leading these conversations are the future of business.

"At NotCo, we really see the plant-based movement as part of this future. The way the food industry works currently is broken and needs to be disrupted. At NotCo our ambition is provide mouth-watering plant-based food so that the consumer has an option to change without changing. The goal isn’t to necessarily convert all to veganism, but to be the option that makes that heavy meat eater for example, change once, twice or even more times a week to something plant based. That's already a big impact.

"Since I started working in companies like this, my personal habits have changed a lot. I’ve reduced drastically the consumption of animal products for example because I now understand better the impacts and am also more aware of the options out there."

Do you have any piece of advice for any women who are interested in a career in the food industry or launching a food startup?

"Two things that I wish someone had told me sooner, regardless of the sector:

"First, don't let stigmas be the barriers that you create for yourself: ‘she’s the only women in the room, she looks younger, she doesn’t look experienced, she is emotional, expressive…’ and the list goes on. Shut those comments out! I personally believe that more and more, it's less about what you know and more about your profiling: how curious, adaptable, proactive, and driven you are. Somebody else might have 20 plus years’ experience, but they don’t know everything. How can they? With the world changing and moving so quickly, it’s more a question of adapting, learning, collaborating, and executing.

"Second, create your safety network. Do you have peers and mentors – men or women – where you can talk aloud about things that are troubling you?

"The imposter syndrome is more common than you think. More often than not, – this was something that was very surprising throughout my career – that amazing, fearless and strong woman that you see at work is also struggling with it. That’s why I believe in the power of the sisterhood and how when women unite nothing is unreachable. If you have a good safety net and support system, you will feel limitless and feel that you're able to achieve whatever you set your mind to. And you can!”