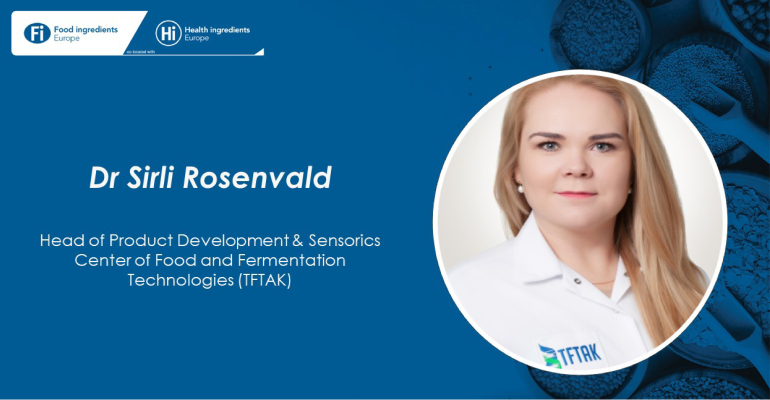 Consumers are becoming increasingly interested in alternative proteins such as pea, fava bean, and oat but, one of the biggest challenges that food developers face when working with pea or oat, is achieving a neutral flavour. Therefore, from a sensory and functional point of view, soy with its neutral taste, excellent functionality, and nutritional profile, is the reference ingredient for vegan products.

The Centre of Food and Fermentation Technologies (TFTAK) in Estonia is a contract research organisation that works with different plant proteins and is particularly focused on broadening the range of different protein sources to help valorise them and develop environmentally friendly production processes around the world.

“With our equipment, we can analyse a wide range of molecules in the plant-based or any other material, but without doing sensory analysis, we don’t understand the importance of each molecule in terms of sensory or consumer perception. If we want to bring to the market products that consumers like, we have to understand both the key factors influencing their acceptability as well as on the molecular level.”

The main sensory challenges in the development of meat alternatives can be divided into three main categories, Dr. Rosenvald explained. The first is aroma, a sensation triggered when volatile molecules hit the receptors in the nose either by smelling or eating the product. The aroma of plant proteins is typically described as beany, grainy, green, or hay-like. The second category is taste. For plant proteins, bitterness and astringency tend to pose the biggest challenges. And the third is texture. For meat alternative developments, the texture of the products is one of the key parameters influencing liking, as consumers expect the texture of meat.

“If we get to know what the exact molecules behind the pea-like note in pea protein are, there is a possibility to know how to reduce it, get rid of it, or mask it. If we don’t know this, we are working in the dark,” she added.

Tallinn-headquartered TFTAK is currently investigating the use of inactive yeast products to improve the taste of meat and dairy analogues, as they can have different functions in the product.

Yeast can tackle the issue of bitterness by blocking the bitter receptors, or by boosting sweetness which, in turn, reduces the perceived bitterness.

“Yeast products contain molecules that can help to enhance some specific notes or decrease others, and there might be quite a lot of mechanisms for that,” she said. “For instance, if we’re talking about masking volatile aroma components such as the ones causing green or hay notes, one possible way yeast works is due to the binding mechanisms of volatiles, peptides, and proteins. As a result, the vaporisation of those aroma molecules is decreased in the mouth, they don’t reach the receptors, and we don’t perceive as strong a beany-note, for instance.”

“Besides masking, yeast products are also added because they contain different components that give umami meaty notes to our alternative products,” she said. “From an aroma perspective, during the cooking process we want to receive meat-like aroma components like beefy, meaty, or roasted. These molecules are actually a result of the Maillard reaction, so yeast products are a source for amino acids and peptides that are the precursor components for the Maillard reaction and flavour generation during cooking.”

Fish made from pea and oat

The Centre of Food and Fermentation Technologies was recently selected as a semi-finalist in the prestigious XPrize ‘Feed the Next Billion’ competition, thanks to its successful pitch on how to develop a plant-based fish analogue, specifically, a cod fillet.

“The aim of this competition is to produce a fillet, meaning big chunk or piece, and if we look at the current market for both meat and fish analogues, there are a lot of minced meat-type products but not many fillets, because the production of that is much more complicated.”

The contract research organization is looking at using pea and oat proteins to make the cod-alternative and will present its product in the XPrize semi-final testing in Q3 2022.