'Only 2% of venture capital goes to all-female teams. We need to change this' - Isabel Hoffmann [Interview] 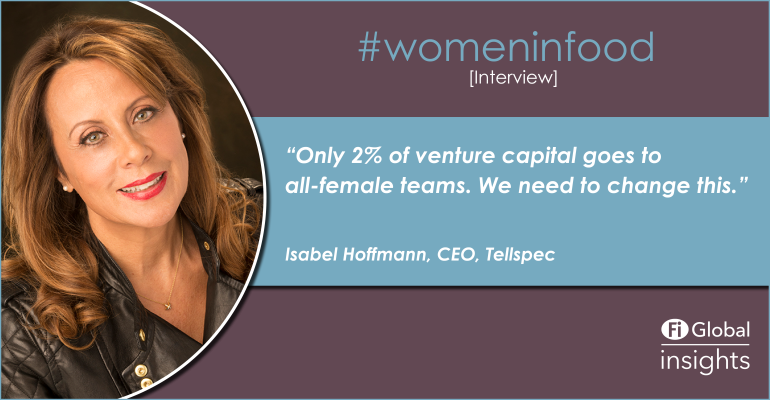 Isabel Hoffmann is CEO of Tellspec, a company that builds intelligent sensors and data analytics solutions, powered by artificial intelligence, for rapid, out-of-lab analysis of raw materials and biospecimens. Its Enterprise food sensor is used by operators across the food chain to detect instances of food fraud and adulteration or simply freshness and quality on specimens such as cocoa beans, cow’s milk, and flour.

Tellspec is currently working with the University of Turin and the Sant’Anna Hospital in Italy, on a sensor called Preemie to personalize and track the nutritional intake of preterm infants, thereby reducing the risks associated with premature birth.

Isabel’s career has taken her from Brazil to Portugal, Canada to South Korea. We caught up with her to find out more.

What was the inspiration for Tellspec?

“My daughter was the inspiration for Tellspec. She was very sick back in 2011 and 2012 and had to be careful with the food she ate. So, my idea was to build a device to actually test the chemical ingredients of each food. That is how Tellspec was born.”

Your career is diverse; you have been a judge at the New York International Film Festival; president of The American Academy of Anti-Aging Medicine’s regional chapters; and visiting professor at the University of Porto’s business school. What attracted you to the food sector?

“To be frank, it was not exactly the food sector that attracted me but rather the challenge of developing a small device that could test food for its quality, authenticity, and ingredients. It took many years to get where we are today, and many different experts from a variety of areas including spectroscopy, analytical chemistry, optics, mathematics, data scientist, cloud engineers, software developers and project managers.”

In 2018, you received the EIT Women Innovation award. What is the value of such awards that specifically recognise women’s achievements and what did it mean to you to scoop up first prize?

“The EIT Women award was an honour to receive, and I am very thankful to the judges and to EIT to have chosen me amongst so many amazing and well deserving entries. This award opened many doors for my team and me. It solidified the veracity of our technology and gave us the reward needed for the hard work we had done. It was amazing! I have the nicest memories of this event. I also made many women friends at this event and today we still support each other. It was overall a great experience, and we learnt a lot.”

You consider Tellspec to be operating at the crossroads of the food tech and deep tech industries. How does your experience as a female executive in this industry compare to other sectors you have worked in? Is it a more challenging environment?

“My team and I are focussed on solving mankind's problems by tackling societal and environmental issues using scientific or engineering challenges. It is a hard industry for anyone to be a CEO. Companies in this space rely on grants or investments. But women raise much less venture capital than their male-only counterparts. In Europe, only 5% of venture capital goes to mixed teams and only 2% to all-female teams. This is why very few women lead deep tech companies. But we need to change this.

Achieving gender equality is a key element of the sustainable development goals of our society. Studies have shown that diversity of all types, be it gender, race, or sexual identity, increases productivity and innovation in any organization. This is a challenge that we believe needs to be addressed, especially now as we build a world of AI applications, so we can ensure we create an inclusive AI that represents our multicultural and multi-gender society.”

Is it difficult for you juggling professional and personal responsibilities?

“It is very hard because my generation was raised with roles assigned to a binary gender system, which inculcates behaviours that are very hard to change. I have been twice married and twice divorced and I see very clearly that I did not have the support I needed from my marriages. I had to be super Mom and super CEO. I had to do those two roles at the same time with total focus and total devotion and hard work. I am fortunate that I have an amazing amount of energy and can work easily 10 to 14 hours in a day. This is what I did to get here.

It was, and still is, an unbalanced world where women are expected to do so much more than men and where men are comfortable doing so much less but claim they are more important. I am happy to see that my daughter's generation does not suffer from this binary gender role assignment, and I hope that when she is my age, she will not have to do the extra work I did to be successful; that she can pause and enjoy her day.”

Do you have any advice for budding women entrepreneurs operating in the field of food tech?

“It is always hard to give general advice, but here it is: build your company on passion for what you do or wish to do, then work hard, be consistent and persistent. Do not let obstacles destroy your dream, see them as learning experiences that will make you wiser and better at what you do.”

Transparency, traceability and ingredient integrity in the agri-food supply chain are becoming increasingly important for consumers for both sustainability and food safety reasons. Do you have any advice for food and drink manufacturers and suppliers on steps they can take to increase public trust in food?

“We are about to embark on a massive digital revolution in the food industry: food will be digitized. Consumers will be able to use BlockChain technology to track the different steps the food has travelled in the agri-food supply chain. They will also have small spectrometers in their phones or smart watches to test for the actual ingredients of each food. They will be able to see if the food is authentic or adulterated; if the label claims are correct; and if the food has been produced fairly and equitably. Now is the time for food and drink manufacturers to clean up their act because they will be held accountable not by regulators but by the consumers themselves.”