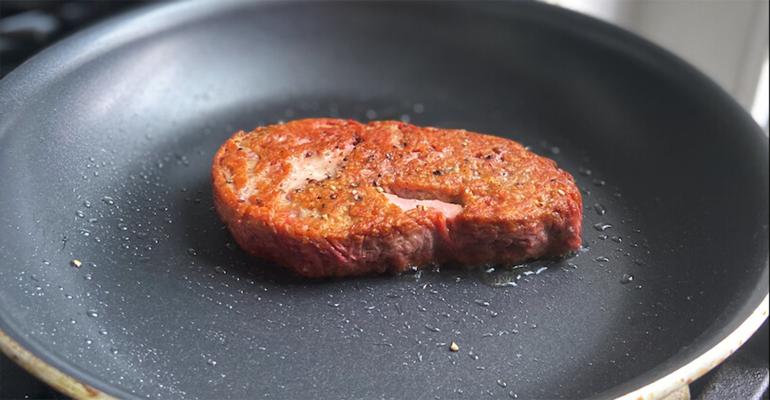 The company’s founder Amos Golan moved from Israel to the US in 2016. It was, in his own words, “the year when the plant-based trend began to kick off”.

“But it was clear that two things were missing. One, all the products were ground beef and, although it’s a big portion of beef market, it’s still less than 40% while the rest is whole cuts.

“Second, when you look at […] the very long ingredient lists and see things like methyl cellulose, cultured dextrose, and different GMOs, it was clear that these products are a great alternative to, say, a Burger King burger but they won’t be something people will eat as their daily protein staples.”

Golan started working at Ferrero in the open innovation team where he was exposed to emerging food industry trends, such as fermentation and biotech, and how these can be used to improve raw materials and upcycle co-streams.

“I was intrigued to use [fermentation] as way to solve what seemed to me be a technical challenge to achieve better plant-based proteins.”

The entrepreneur began spending his spare time developing prototypes of plant-based rib-eye steak in his kitchen in New York. After sending samples to investors and receiving positive feedback, he moved back to Israel and founded Chunk Foods. Today, the start-up has a team of nine and recently raised just under $2 million in a pre-seed round with investment from E14 Fund, Good Seed Ventures, and Stray Dog Capital.

Chunk Foods is still developing its product and, with patents pending, and Golan did not reveal many details about its process. However, he did say the products are made with plant proteins that are fermented using GRAS approved cultures that have a history of safe use. Its fermentation process also generates less waste and fewer side streams compared to submersed fermentation, he said. Chunk Foods has not tested to see if the fermentation process improves the nutritional quality of the plant-protein base but it plans to do so soon.

The company says that fermentation is key to improving sensory attributes, such as flavour and texture, and allowing it to produce ‘whole cut’ style products. Forget reconstituted vegan chicken nuggets or burger patties.

“It’s a different category,” said Golan. “We are creating products that are whole cuts, like steaks, roasts, ribs. All of these different cuts have well defined textures, fat marbling, and are large, […] a nice portion of 250 g.

“The other thing that really differentiates us is the label. We have a very clean label with very few ingredients […] and without methyl cellulose, gums, stabilisers, and other ingredients that consumers are increasingly wary of. We use primary ingredients that are improved through our fermentation process.

“And finally, the look and feel of the product [differentiates us]. It looks like an uncooked beef steak; it changes colour and sizzles when it cooks and it has fat marbling that melts into the product. We have something that looks and behaves like animal fat.” 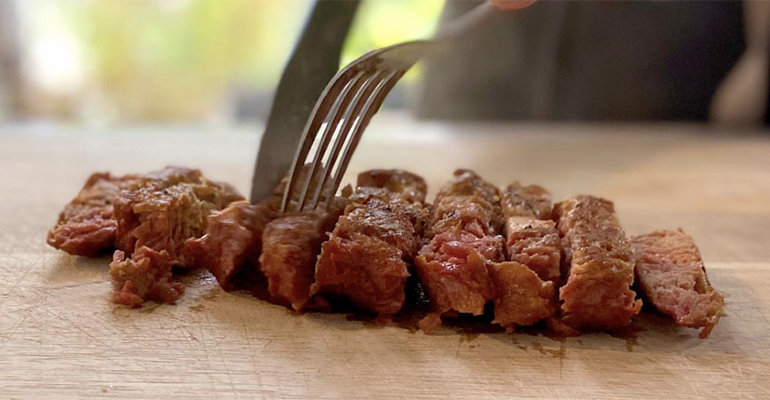 The company’s R&D subsidiary is based in Israel but manufacturing will likely take place in the US, its main target market, with a commercial launch planned for 2022. Its first product will be boneless cuts of steak.

“The benefit of whole cut would really be most apparent in plant-based beef products because they are non-existent in the market but are a very large portion of the beef market. Down the road, we believe our technology is quite versatile and will tackle other animals. It also seems that extrusion gives quite good quality alternatives to chicken and there is lots of work being done there, so we are trying to focus on other things that are harder to do,” said Golan.

Future new product development will likely focus on fish and seafood, such as scallops.

The start-up aims to sell its product in the chilled meat section of supermarkets alongside other unprocessed meat cuts. According to Golan, this could be what it takes to give plant-based products mainstream and everyday appeal.

“I think there’s room for real adoption of alternatives to meat [but] you need to give people something that’s closer to an ingredient than a packaged food,” Golan told Fi Global Insights. “I believe that bigger adoption of these products will happen only when people see them as serving that purpose. That’s why we want a product with a short, clean label that looks like raw piece of meat and that can be braised, fried, grilled, or roasted. Those are some of the applications that we will be testing.”

The whole-cut approach is also what has caught the eye of key investors. According to Johnny Ream, partner at Stray Dog Capital, developing plant-based alternative proteins that resemble traditional whole-muscle products such as steak is often regarded as the most difficult and complex to achieve.

“We believe Chunk’s technologies and proprietary processes have strong potential to play a significant role in bringing these types of products to market,” he said.

According to Golan, its plant-based steak can be cooked to different extents in order to yield different sensory experiences but does not replicate a beef steak that can be served blue, rare, medium or well-done – not yet anyway.

“I don’t know if we can manage to get that accurate with the cooking degree and analogy to meat […] but that will be part of the holy grail, to get to something that behaves similarly throughout the whole process,” he said.