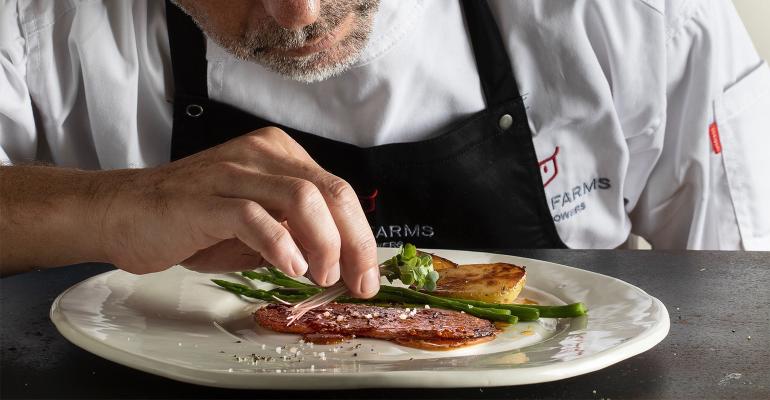 One the world’s biggest meat producers, BRF, will produce and distribute cell-cultured meat in Brazil through a partnership with Aleph Farms. But what does this mean for the country’s traditional meat sector?

BRF, which has over 30 brands in its portfolio and a reported revenue of around US$7.25 billion, has signed a memorandum of understanding with Israeli biotech start-up Aleph Farms to commercialise cell-cultured meat in the South American country.

Under the terms of the agreement, both companies will co-develop and produce cultivated meat using Aleph's patented production platforms, dubbed BioFarm, and BRF will distribute the animal-free beef in Brazil. The Rehovot-headquartered start-up recently inked a similar deal with Mitsubishi in Japan.

Aleph produces steaks, or ‘structured meat’, via a non-GMO cell-cultivation process that uses non-immortalized cell lines taken from cows without harming the animal and without the use of foetal bovine serum (FBS), which would make the final product non-vegetarian.

While it takes around two years to produce a steak from a cow, Aleph can grow the animal cells in a bioreactor in around three to four weeks.

According to Didier Toubia, Aleph’s co-founder and CEO, its optimised platform will allow it to reach cost parity with conventional, animal-based meat when it reaches scale. Brazilians can expect to try BRF-produced cell-cultured meat in 2024, although the product will likely be rolled out in restaurant settings before hitting supermarket shelves, Toubia told Fi Global Insights.

In partnership with the meat processing giant, Aleph plans to begin conducting consumer research over the coming months to understand how Brazilians perceive cell-cultured meat.

Both companies will also work to set up transparent communications with the Ministry of Agriculture (MAPA) and the food safety authority, ANVISA, to ensure regulatory approval, he added.

Sergio Pinto, director of innovation at BRF, said the partnership would offer a choice of alternatives to consumers, optimize efficiency and, at the same time, reduce the strain on the production chain.

"We are a food company that invests in advanced technology and respects and combines new trends associated with social and environmental sustainability. By producing high-quality sustainable cultivated meat, we can further establish our role as agents of transformation in the food industry, by offering the latest innovations in the production of meat,” Pinto said. 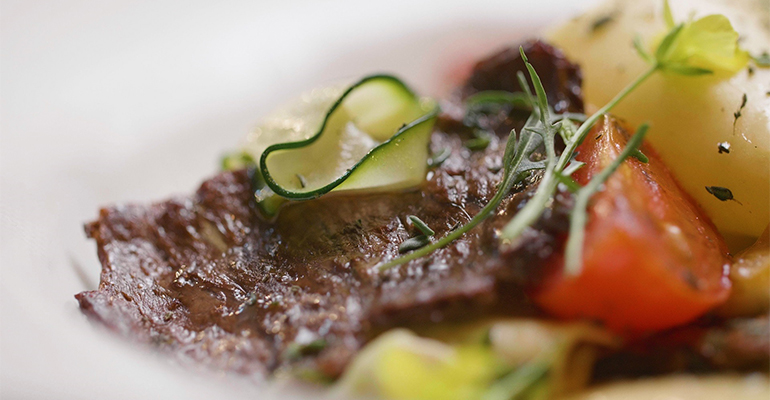 Going from grass-fed to lab-grown

Brazil is the world’s largest exporter of beef, accounting for 20% of global exports, and its second largest producer, according to figures from the Brazilian Confederation of Agriculture and Livestock (CNA).

In recent years, the country has become synonymous with beef production – and many of the problems associated with it, such as its role in fuelling deforestation in the Brazilian Amazon and Cerrado.

Proponents of ‘biofarming’ argue that if consumers swap meat from grass- or soy-fed to lab-grown meat, the environmental impact could be significant.

Global consultancy A.T. Kearney predicts that in 20 years, only 40% of global meat consumption will come from conventional, animal sources. Although novel vegan meat replacements will be essential in the ‘transition phase’, cultured meat will win in the long run, according to its analysts, writing in a report, ‘How will cultured meat and meat alternatives disrupt the agriculture and food industry?’

Asked what such a transformation would mean for Brazil’s significant cattle farming sector, Toubia said:

“Regarding ranchers, we believe food systems should provide access to food in a way that adequately satisfies the socio-cultural needs of all. The transition to more resilient food systems must include collaborations and partnerships with farmers to promote their prosperity and introduce new business possibilities or supporting career changes.

“Cultivated meat is an opportunity for existing producers to forge new revenue streams alongside conventional production. Supporting and investing in local production, empowering communities, and giving control back to farmers is a critical part of the overall social and systematic change required of the agricultural and food industry.”

Cell-cultured meat: ‘Once a threat, now an advantage’

Dr Carla Molento, the professor behind Brazil’s first-ever postgraduate course on cultivated meat, entitled ‘An Introduction to Cellular Animal Science’, which has been offered at the Federal University of Paraná since last year, believes the traditional sector must join forces with the new one.

“We are giving professionals involved in traditional meat production the possibility to join the new food system. What was once perceived as a threat to their jobs is now seen as an advantage.”

The course, which was supported by non-profit organization, The Good Food Institute (GFI), aims to tackle the full spectrum of cell-cultured meat as a disruptive innovation, ranging from the science and R&D to how the global meat chain could be reorganised.

“The future of food is already here, and it brings many opportunities to transform the production system for the better. Brazil is about to see the launch of an organized group of professionals interested in pioneering this process and revolutionizing the way meat is produced in the country.”