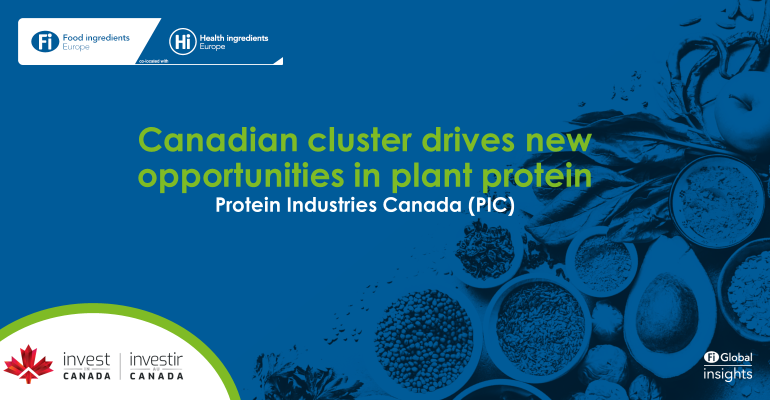 The innovation supercluster Protein Industries Canada (PIC) is creating new R&D, investment and business opportunities in the ingredients sector. Frank Hart, a founder and first Board Chair of PIC, explains how this initiative is helping Canadian agriculture meet global demand for plant-based food and ingredients.

Protein Industries Canada (PIC) was created in 2018 as part of a policy initiative of the Canadian government to increase industry-led R&D in various sectors across the country. It is one of five superclusters designed to leverage Canada’s specific expertise and untapped industrial potential in a particular region.

“In 2015, the government held a massive industry roundtable focused on examining the state of the Canadian economy,” explains Hart. “It was recognised that Canada was missing out on leveraging its full innovation potential. Out of this roundtable, there was a consensus that Canada should focus on areas where it can really punch above its weight.”

To achieve this aim, Canada sought inspiration from abroad. It recognised from the experience of countries such as Germany, China and the UK the importance – and effectiveness – of supporting regional clusters of excellence.

“A cluster is effectively a region that has a disproportionate share of the world’s market, with respect to its domestic consumption,” says Hart. “Such clusters have really defined how regions become competitive. We looked closely at several successful clusters, and saw that there tended to be tight coordination between policy, investment and academic R&D.”

Along these lines, the Canadian government launched a call for ideas and proposals, with CAN $1 billion on offer to develop successful bids. An initial 60 proposals were whittled down to five regional clusters of excellence: Oceans; Artificial Intelligence; Next Generation Manufacturing; Digitalisation; and – for Western Canada – agriculture.

A key question facing PIC was how to add value to existing excellence in agriculture. It was recognised that Canadian agriculture was very well placed to meet growing global demand for plant protein.

“Another thing that has changed is the importance of decarbonisation,” says Hart, who will be giving a presentation at Fi Europe in December. “We recognised that we could offer manufacturers the opportunity to produce ingredients at source, given the diversity of our crops, the size of our arable land and the expertise of our farmers.”

The cluster next developed ‘The Road to $25 Billion’, Canada’s plan to capture 10% of the world’s plant-based food industry by 2035 (up from a current 3%). This will be achieved through making Canada a global hub for plant-based food companies, creating a progressive regulatory system for plant-based foods, and focusing very much on innovation. A key benefit of the cluster is that it brings together farmers and policy makers, investors and academia, rather than leaving everyone to work in their siloes.

Over the past four years, PIC, in partnership with the private sector, has invested some CAN $478 million into plant protein-related innovations. These innovations have resulted in 230 unique intellectual property (IP) assets, attracted over $300 million in follow-on private investments.

Some 83% of the IP assets created were generated from small to medium sized enterprises, while 23% were in plant genetics. Some 66% were in farm production technologies, such as enhanced farming efficiencies, supply chain traceability, reducing crop protection inputs, etc. Such investments will further help Canadian agriculture to reduce greenhouse gas reductions, strengthen supply chain and traceability, and reduce the application of crop protection chemicals such as herbicides and fungicides.

PIC is currently in the process of recapitalising its funding.

“In its second fund, PIC will still invest in innovations around improved germ plasm and crop production, but will focus much more heavily on developing ingredient production for plant-based food, feed and fibre ingredients,” says Hart.

In addition, there are plans to invest over $2.5 billion in an integrated agriculture complex, to produce renewable diesel as well as plant protein concentrate from canola. This will process roughly 2 million metric tonnes of canola seed annually, and convert this into 1 billion litres of renewable diesel fuel with a carbon intensity 90% lower than regular diesel fuel. This renewable fuel can be blended directly with existing fossil diesel fuel to significantly reduce its carbon intensity.

The integrated agriculture complex is expected to be operational in 2026.

PIC has set Canada on the path towards becoming a key sustainable exporter of ingredients - with a particular focus on plant-based proteins – as well as an attractive destination for investment.

“The Canadian agricultural ecosystem is very much oriented in the direction in which European ingredient companies want to go,” says Hart.

Join us for a morning of networking, career-changing advice, and delicious food!
Nov 18, 2022