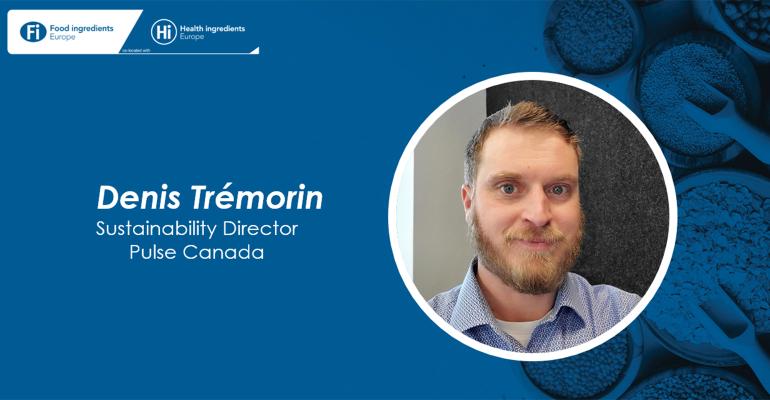 In Canada, over 80% of farmers grow nitrogen-fixing lentils without tilling the soil, which boosts soil health, sequesters carbon in the ground, and gives brands a compelling sustainability story to tell consumers and investors alike.

One of the biggest sustainable advantages that pulses such as lentils offer is that, thanks to a special symbiosis with soil bacteria, they are capable of fixing their own nitrogen. This cuts out the need for fertilizers.

“In crop production, one of the major causes of environmental issues, especially greenhouse gas emissions, is due to nitrogen fertilizers,” explained Denis Trémorin, Sustainability Director at trade association Pulse Canada. “Having a crop in rotation with other crops that doesn’t require nitrogen gives farmers an economic break – they don’t have to spend money on as much nitrogen fertilizer, which is extremely important in today’s economic context because prices are through the roof right now – and there are big environmental benefits. ”

“Lentils in particular, but also other pulse crops like peas, fava and chickpea, all have very low carbon footprints due to this [nitrogen-fixing capability] compared to other rotation crops and even crops for competing plant-based ingredients.”

Growing pulses in Canada also makes sense because these crops are suited to its climate. The main pulse-producing regions of Canada – Alberta, Saskatchewan and, to a lesser extent, Manitoba – have a semi-arid, cold climate where there is a risk of drought. Lentils are well adapted to these dry conditions and can produce yields with little water. The fact they are not water-thirsty also benefits the rotation crop that is planted following the lentil harvest because they leave more water in the soil for these rotation crops, typically wheat or oil seed crops such as canola.

Another distinction that sets Canadian pulse production apart in terms of sustainability is the zero-till policy practiced by most Canadian farmers. Most began phasing out soil tillage in the late eighties and early nineties and today, around 82% of lentil producers have adopted this practice, Trémorin said.

“Farmers harvest the previous crop and, when planting the new crop, they seed right into the stubble. The benefit of that is, we are protecting our soil, have better soil health and are sequestering soil carbon. So, there are two advantages to our system: pulses like lentils have low emissions but also our farmers use practices that have been proven, with about 30 years of research, to build soil carbon up and remove carbon from the atmosphere. ”

“We talk a lot in agriculture today about our role and how to contribute to the climate change challenge. Pulses in particular fit the bill [as] something that can contribute to […] helping abate the issues we are seeing globally associated with climate change.”

Lentils as a tool for Corporate Social Responsibility

Consumer awareness of lentils and other pulses was given a boost in 2016 when the United Nations’ Food and Agriculture Organization (FAO) selected it as the Year of the Pulse and worked to raise the profile of this cheap, nutritious and sustainable food.

According to Trémorin, the Year of the Pulse helped boost consumer knowledge of the nutritional benefits of pulses but the environmental benefits are less well understood and more work is needed to educate the market. With climate change increasingly at the forefront of public debate, however, consumers are growing more and more receptive to learning about the carbon footprint of food and finding out how ingredients can be grown sustainably.

The sustainability of Canadian pulse crops has the advantage of being backed up by decades of research and robust datasets that companies can use for in-depth analysis of their products such as life cycle assessments, Tremorin added.

“Many are taking positions around carbon neutrality by a certain date and, in some cases, it’s not even about telling consumers about this; it’s about telling investors and corporate stakeholders what you are doing to reduce emissions and that’s another benefit of pulses: they are a tool that enables companies to reach those goals.”