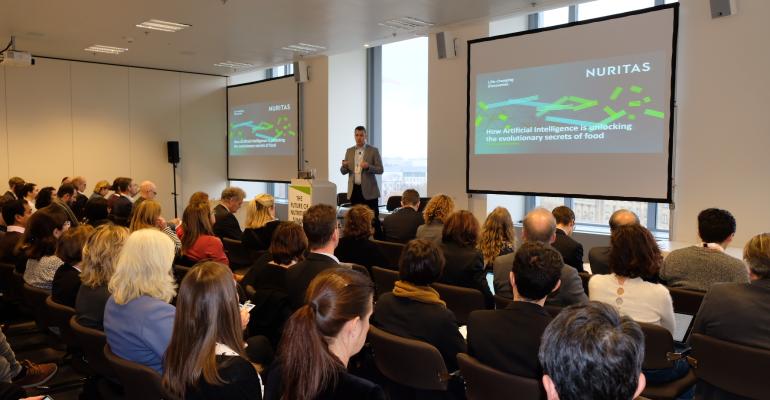 Artificial intelligence (AI) has exited the realms of science fiction. It is set to make an impact on the health food and supplements industries, thanks to advances in genomics and a data-driven platform to identify and unlock beneficial peptides within common foodstuffs.

"The health of our bodies is no longer just a human science, it is also a data science".

Genomics research means that huge amounts of data are now available, not just about the DNA of humans but also of other animals and plants.

Foster said that while a consumer may regard an apple as a fruit and a source of nutrition, a dietician regards it in terms of its nutrient composition and a chemist sees chemical complexity.

"We look at it differently. A mathematician sees data -- there are 30 billion peptides within an apple."

Nuritas was founded by mathematician Dr Nora Khaldi in 2011, and its AI technology has significantly reduced both the time and the cost of  identifying new bioactive peptides from food sources. These peptides, short chains of amino acids with remarkable health benefits, are not accessible simply by eating the foodstuff, as it takes more than just stomach enzymes to activate them.

Citing open information from an EU project to identify dairy peptides, Foster said that traditional methods of identifying peptides can take between seven and 10 years and cost over €35 million -- and there is still only a 0.1% chance of identifying a useful peptide that can be commercialised. Nuritas has reduced the discovery timescale to a matter of months.

The target phase involves identifying the receptor, the metabolic pathway, and the gene to activate or deactivate. Nuritas' "artificial brain" then reads and understands up to 10,000 scientific papers a day, and makes connections and patterns that are beyond the powers of any human brain.

The predict phase concerns identification of potentially beneficial peptides within a given foodstuff, using what has been learned about the gene and receptor and how they interact.

Finally, the system configures the 'key' to unlocking the peptides from food, ensuring that the predictions hold true in a human context. When it comes to scale-up, there is a need to ensure that the activity is not lost. According to Foster, the benefit is that the peptides are fully characterised in terms of what they are and how they work.

"If no-one knows the central molecule, you have no idea where the activity is lost in scaling up," said Foster.

The company's prediction algorithms have accuracy rate of over 50%, and it has successfully scaled three products in three years.

One of the successfully scaled peptides is the subject of a royalty-based licensing agreement with BASF and the hard launch is anticipated for early 2018. Although Foster was not at liberty to reveal details, he did say that it is has anti-inflammatory action. The two companies are continuing to collaborate over the discovery of other food-derived peptides with health benefits, in line with market needs identified by BASF's marketing team.

Another peptide, which is currently going through pre-clinical trials, is for pre-diabetes. While Nuritas carries out some clinical trials itself using funding under the EU Horizon 2020 programme, in other cases they are conducted by its partners.

Foster said that while Nuritas has significantly speeded up the peptide identification process, other steps involved in bringing new ingredients to market take longer and are out of its control, such as regulatory approval and health claims. Generally speaking, however, the company is working with non-novel food sources and non-novel extraction processes, so there is no need to obtain novel foods approval.

The startup  has an impressive line-up of investors, including Bono and The Edge of Irish band U2, New Protein Capital, Salesforce CEO Marc Benioff, and Silicon Valley investor Ali Partovi.

Partovi, who has claimed Nuritas has the potential to be "bigger than Facebook", has also been quoted as saying: