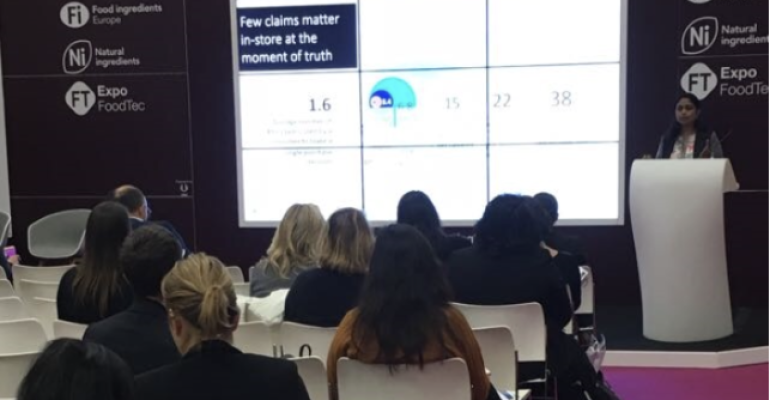 Shoppers decide whether to buy a food product after looking at an average of 1.6 on-pack claims, according to research by NAILBITER, meaning it is crucial to have the right wording on products to close the deal.

Using its video platform, NAILBITER investigated how claims impact consumers' decisions in-store. The research involved 600 supermarket shoppers in the US and the UK who bought packaged food products. The shoppers received an alert on their smartphone inviting them to participate on entering the shop. If they agreed, they used their phones to record their decisions on which products to buy. The videos were then decoded and analysed using NAILBITER's algorithms.

Amishi Takalkar, co-founder and Head of Research and Analytics at NAILBITER, told delegates at the Fi Europe Conference that participants in both the US and the UK made in-moment decisions.

"They do not think for ten minutes."

However she did detect some differences between American and British consumers when it came to health and wellness-related claims, which will help marketers decide which attributes to emphasize on product packs.

Overall, fat and calories were the most looked-at health and wellness claims in both countries. Yet while the American participants were more focused on calories (38%) than fat (24%), the opposite was seen among the Brits (36% used fat claims to 28% calorie claims).

"Olive oil as an ingredient makes shoppers feel better about fat and calories," Takalkar said. "It is seen as a healthy ingredient, so people rationalise their decision."

A similar effect was seen for the words 'oven baked', as oven cooking is perceived as a healthier than frying.

Salt, sugar, and suspicion over substitutes

Again, Takalkar reported that 'sea salt' on the pack made some UK shoppers feel better about salt content.

As for sugar, shoppers did not tend to look at the source, such as high-fructose corn syrup or natural sweeteners. Moreover, there was a clear preference for low-, rather than no-sugar products, as sugar substitutes are perceived as less healthy.

Interestingly, the word 'organic' was enough to influence many shoppers' decisions -- they did not seek details on certification. The exception was first-time organic buyers:

"When people trade up to organic they do pay attention to certification the first time."

Out with carbs, in with wholegrains

In previous years US consumers have been preoccupied with carbohydrate consumption. The research suggested this is changing, as shoppers tended to read wholegrain, multigrain and fibre claims (33%) rather than total carb content.

In the UK, shoppers were less concerned about wholegrains and fibre claims, which were consulted by 17% of participants.

In the US, 10% of shoppers based their decisions on vegetable claims -- and none on vegetarian or vegan claims. According to Takalkar, this indicates that "they just want enough".

In the UK, on the other hand, some consumers have moved beyond getting enough and are looking to make firm lifestyle changes. Just 3% looked at vegetable content, compared to 8% who used vegan claims and 5% who used vegetarian claims.