Fractionating and fibrilising plant proteins for a meaty texture 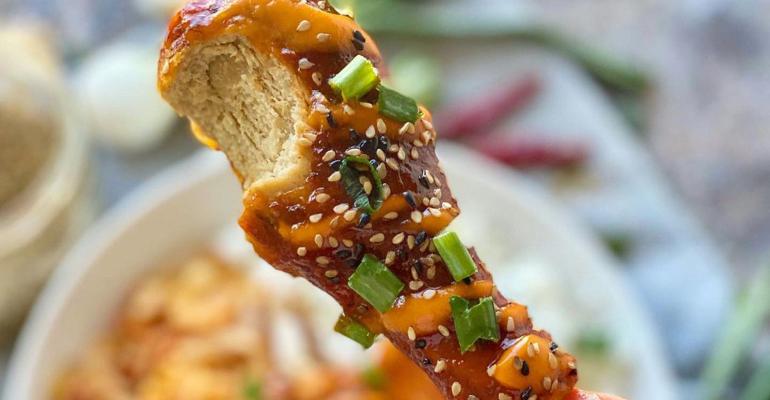 Female-led US start-up Sundial Foods has developed a patent-pending mechanical process to recreate the fibrous texture of chicken. Its product, a plant-based chicken drumstick complete with crispy skin, can be barbecued, grilled, fried and roasted, and is set to launch in 2022.

The company was founded by Siwen Deng and Jessica Schwabach, who met as students at the University of California, Berkeley after signing up for an alternative meat challenge class. Although neither planned to pursue a career in the food industry, they were soon developing solutions to improve current plant-based offerings.

“There is so much [plant-based] R&D going into these products and a lot of cool things are coming out but we thought, if these products aren’t genuinely healthy or good for consumers then we are doing work that doesn’t need to be done. Because animals can already produce a healthy product for consumers in a way.

“So, we wanted our products to be genuinely good for people and for us that meant clean label; not only matching the macros of plant-based but also having minimal processing and making sure these products are healthy. But when we looked at the different industrial processing methods and the ways to make it taste good while still maintaining that principle, we saw that there weren’t really [such] processes out there.”

Many plant-based products are based on protein isolate, for instance, which is manufactured using chemicals and can remove certain valuable micronutrients from ingredients. Plant-based product developers also commonly use extrusion to recreate the meaty, fibrous texture of animal protein but extrusion is a harsh processing method that subjects the ingredient to extremes in temperature and pressure, and is energy-intensive.

Schwabach and Deng’s process involves mechanical fractionation to produce a protein concentrate, which is then fibrilised. By varying the ingredient inputs, they say they can create different fibre sizes, allowing them to mimic different meat products.

“This process allows us to control not only the little fibres you see when you take one bite of meat but also the 3D structure of muscle, cuts and bundles – the whole aesthetic of meat – and that has led us to a whole-cut concept,” said Schwabach. “[With] fibrilisation, we essentially rely on the protein network to form fibres or to unwind and then align them. It’s similar to extrusion but in a less intensive way and we don’t only have the proteins and are not creating a protein isolate the way extrusion generally is. It allows us to incorporate other components to create a different texture.”

Top of the class

Deng and Schwabach’s process and business proposition caught the eye of Nestlé, which had been taking part in the UC Berkeley class, and it invited Sundial Foods to join its year-long R&D Accelerator programme in Lausanne, Switzerland.

As part of this programme, Deng and Schwabach built a pilot plant line to their manufacture product: chicken drumsticks made of fibrous, plant-based meat, overlaid with a plant-based skin and set on a ‘bone’ (actually a wooden stick). They also launched the prototype in around 40 Swiss stores over eight weeks, which provided an opportunity to gather consumer feedback. 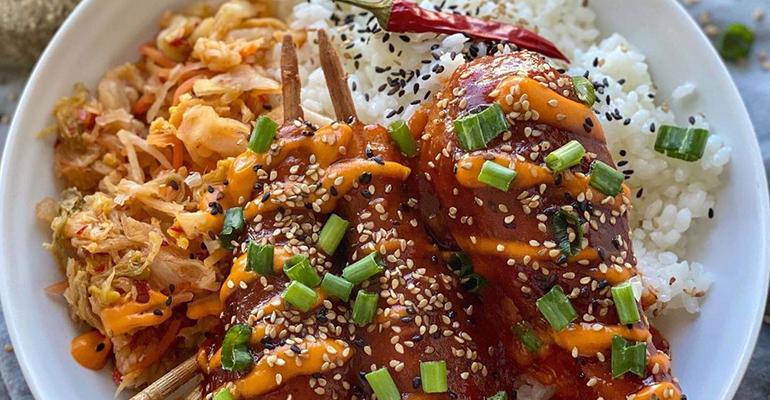 Their main concern was initially, was this product ‘too weird’ for consumers?

“It’s very realistic looking,” said Schwabach. “It looks raw. The skin starts light with a spice mix for aesthetic purposes, and when you cook it, it browns like chicken.”

However, feedback was, on the whole, very positive. Schwabach added:

Sundial Foods is currently preparing for a US product launch in early 2022, starting in restaurants before expanding to retail with its own B2C range. Although Deng and Schwabach are still making small tweaks to the formulation, the final ingredient list will most likely include whole chickpeas, gluten, sunflower oil, chickpea protein concentrate, water, nutritional yeast, and natural flavours. The skin is made with soy and water while sunflower oil provides the fat content.

So, would the plant-based chicken drumsticks fool meat eaters in a blind taste test? This is not necessarily the aim, Schwabach explained.

“I think it’s a subtle question of what is necessary for someone to enjoy the experience of eating the product. So, for us, if the texture is really good and the product can behave in a meal the way meat would behave, that’s enough.”

Deng and Schwabach have experimented with different flavourings that make the product taste exactly like chicken but, depending on the brand’s final positioning, it may opt to omit these, using only the natural flavour of chickpea with umami notes provided by nutritional yeast, as well as additional flavours provided by the marinade.

Sundial Foods was recently chosen to join IndieBio’s latest cohort, a food tech accelerator based in the US. The entrepreneurs are grateful to the help provided by such programmes.

According to Deng, taking part in the Nestlé R&D accelerator was highly formative that helped the pair develop from academia-focused biologists to food tech entrepreneurs.

“The scientific background helped us start; we learn things very quickly and adapt quickly,” she said. “But the past whole year in this R&D accelerator programme gave us lots of experience from prototyping all the way to pilot plant scale.”

The programme also helped the pair broaden their mindset from focusing on the process of product development to considering wider issues, such as food safety compliance, quality control and other regulatory requirements, Deng said.

The company is currently recruiting for a food engineer to join the team.