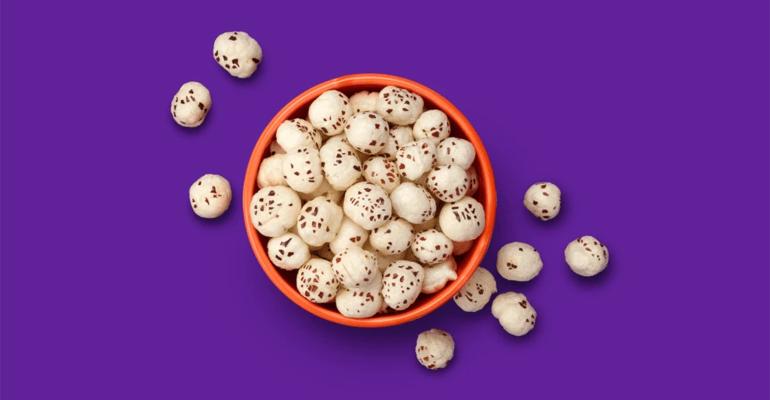 Popped water lily seeds are gaining traction in the West as a healthy, plant-based ingredient that sets snack products apart – but finding the right positioning can be challenging, says one start-up.

Popped lily seeds are a traditional food grown principally in Bihar, an eastern Indian state bordering Nepal, where they are an important cash crop for farmers. The seeds are harvested by hand from the aquatic plant (Euryale ferox) using bamboo spikes, a low-impact but laborious process that gives them a premium positioning.

When roasted or fried, the popped seeds have a crunchy texture that dissolves in the mouth, and a neutral taste – usually described as being somewhere between corn puffs and popcorn – with slight umami flavour notes.

Although still niche in the West, there is growing interest in the ingredient and a rising number of lily seed snack companies. Last year, healthy US retailer Whole Foods predicted that lily seeds would grow in popularity as health-conscious consumers seek out ‘marine munchies, beyond seaweed’ while in 2018, PepsiCo chose lily seed start-up Bohana to take part in its Nutrition Greenhouse programme. London-based Native Snacks and Oh Lily!, founded by two French sisters, are serving the European market.

Vineet Sinha is president and co-founder of California-based start-up Makhana (the Hindi word for lily seeds) that makes popped lily seeds for snacking. According to Sinha, the better-for-your nutritional profile of lily seeds is a major draw.

“People are thinking about what they are putting into their bodies, and they like the fact that we hand make the product, are organic, and use MCT coconut oil, which is a fat-burning coconut oil that athletes use,” he told Fi Global Insights.

“It’s a minimally processed snack, similar to dehydrated fruit […] which means that many of the nutrients and enzymes are preserved because it is not processed or cooked in an aggressive way. Our goal as a company is for eating snacks to be like eating fruit or vegetables. Unfortunately, in the US, we have lost sight of that because everything is processed, extruded, and full of fat, sugar and sodium. You can pick up a bag of lily seeds, eat it and still feel good about yourself.”

Healthy snacking has become big business and, going forward, balance is the key word for successful new product development in the snack category, according to Marcia Mogelonsky, director of insight for food and drink at market research company Mintel. 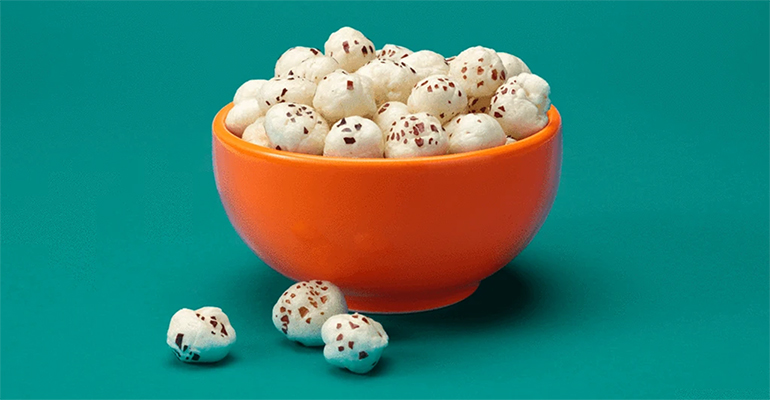 “Consumers want to indulge, but also want healthy options. More than ever, snacking is about balancing the ‘good’ with the ‘bad.’ Consumers may look for healthier options like vegetables or fruit for one snack, but allow themselves to eat chips for the next one,” she wrote on an online blog. “Looking for healthy indulgence in the same snack is also on trend with snackers choosing wholegrains, vegan, or Paleo snacks to satisfy snack urges while supporting good intentions.”

Storytelling and creating a narrative about the origins of a product’s ingredients is also a key trend.

“We want to know the story behind our snacks,” Mogelonsky said. “It’s not just eating snacks with identifiable ingredients and recognizable origins, it’s also snacks that have authenticity or a storied history. We know that consumers love ‘old-fashioned’ snacks and nostalgia is a big factor in snack choice, but there’s also room for ‘new-stalgia’ and creative options that Millennials and Gen-Z will share with their children.”

Makhana is confident it has a story to tell by putting a modern spin on an ancient food, Sinha said; archaeologists have found the remains of popped lily seeds in Acheulian hominin deposits in Israel, suggesting they were an important foodstuff for Homo sapien predecessors.

Although bolstered by a good nutritional profile and compelling story, finding the right positioning for popped lily seeds in the US was not immediately obvious for Makhana, Sinha said.

However, the start-up was supported by Kitchentown, a San Francisco- and Berlin-based accelerator that helps food start-ups develop and scale up products, and by a network of contacts at the University of California, Berkeley where co-founder Mallika Chawla was completing an MBA.

“On the research side, some of our advisors at Berkeley said, ‘you need to look at the quality of lily seeds and see if they belong in the American kitchen today.’ We realised that, instead of trying to position it as a new product, we needed to position it as something better than what [people] already have. We changed our language and said, ‘if you are eating popcorn and corn snacks, then take a look at lily seeds, which are better for you’.”

“We […] were trying to introduce lily seeds and not Indian flavours so that’s why we went with flavours we knew the American consumer would enjoy,” he said, adding that vegan cheddar is the best-seller.

Makhana is already looking ahead to explore lily seeds’ potential beyond the snack category, and plans to launch a lily seed powder in September.

The powder can be used as a whole food supplement, Sinha said, and added to smoothies and breakfast bowls, as a thickening agent in soups and curries, a marinade base when mixed with spices, a crust to replace breadcrumbs or as a partial substitute for flour in bakery applications. The powder will be available in coarse and finely-ground versions, and the company is also developing a curcumin-infused version.