HomeTrendsProteinHow to deal with the global protein crisis
Recent
Exploring the benefits of fibre beyond the gut
Jan 24, 2022
Plant-based protein innovation promises brighter future
Jan 21, 2022
Sustainable protein solution gets ready for market
Jan 20, 2022
Food waste: a renewable source of plastic packaging
Jan 20, 2022
Final countdown begins for front-of-pack labelling and nutrient profiles
Jan 20, 2022
Plant-based: The canvas for innovation [On-demand webinar]
Jan 19, 2022
The latest in lactose-free innovation
Jan 17, 2022
“The most enjoyable part of my job is the satisfaction of knowing that I’m helping sell products that are safe, truthful and compliant.” - Claudia Mucciardi [Interview]
Jan 13, 2022

How to deal with the global protein crisis 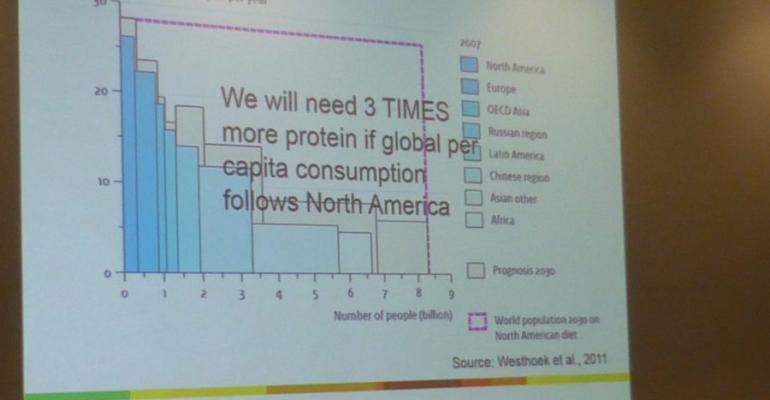 "We can’t just make the cake that we have bigger", Dr Maeve Henchoid addresses the world's growing protein needs

"We can’t just make the cake that we have bigger", Dr Maeve Henchion of Teagasc Food Research Center presented options at Hi Europe 2016 for how the world might address the populations growing protein needs.

With the world population forecast to grow to 9.6 billion by 2050, it is clear there will be  significant demand on the food industry to keep up with protein demand. Yet how much additional protein this crisis will create is not yet clear.

If average protein consumption remains at 80g/capital/day then to increase in population from 7.3 billion to 9.6 billion will require 67,160,000 tonnes more protein per annum (+33%).

However, consumption of protein per capita in the developing world is growing rapidly – driven by increased incomes and higher intakes of animal-based protein:

Society will have to look at other sources of protein. Land is not a finite resource, nor is the sea or energy and there would also be an environmental impact with increasing GHG emissions.

Food consumption is responsible for 30% of EU greenhouse gas (GHG) emissions and plant-based foods are generally lower than animal-based in GHG emissions.

Yet on a dietary basis it is not so clear cut.

“We recently looked at the environmental impact of various diets.” explained Henchion. “While we know plant-based diets are better, we found that the highest consumers of red meat didn’t have highest carbon footprint. It’s very complex.”

As a result any policies need to be holistic in nature – you can’t look at health and environment in isolation.

How to match supply and demand

If we are to match supply and demand there are only really three options open to us, said Dr Henchoin.

“We have already made huge gains with efficiency of productivity. In 2009 21% of animals, 23% of feedstuffs and 35% of water is used to produce same volume of milk as in 1944, and outputs and waste were significantly decreased.”

This table highlights the issues with adoption of these different protein sources:

It is clear that feeding the world of the future will be done with finite resources, and these solutions require research in terms of natural and physical sciences but also the humanities and social sciences.

The issues around adoption of alternative proteins are more social issues – will consumers be happy to eat insects and other foods – than they are scientific.

The industry needs to consider impact of these factors and the implications for supply, prices, and legislation.