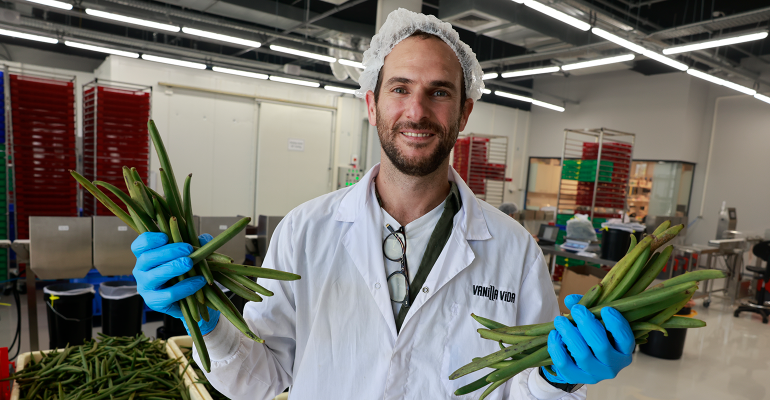 Thanks to a patented curing technique and non-GM methods that alter the metabolism of vanilla beans, Israeli startup Vanilla Vida is intensifying the natural flavour, tailoring taste and reducing lengthy processing times.

Vanilla is one of the world’s most expensive spices, second only to saffron. Its production makes it a costly ingredient - growing solely in tropical climates, labour intensive processing methods and prolonged curing times means supply often does not meet demand.

However, technology developed by Israeli startup Vanilla Vida is transforming the way vanilla is produced, allowing for the spice to be grown anywhere and, as a result, giving the natural flavour more accessibility.

Vanilla Vida saw an opportunity to use technology to add value as well as address the labour intensity that producing vanilla traditionally presents. The startup is transforming vanilla production using image processing technology as well as a variety of non-GMO methods to alter the metabolism of vanilla beans. This dramatically increases flavour levels and ensures the right balance and profile of the vanilla flavour.

“We understand what happens inside the bean. We have a patented curing technology, curing is the professional name, of drying the vanilla bean. Our patent is based on our knowledge of inside of the bean, a deep understanding of the raw material,” says Gali Fried, vice president of marketing and business development at Vanilla Vida.

With the company’s technology, taste and aroma can also be altered creating bespoke vanilla for consumers. The concentration of vanilla is also higher, at anywhere ‘between three to five times’ compared to ‘any other product’ making it more cost effective.

“The taste can be tailored. And when you’re using a climate-controlled environment, you understand the metabolism inside the beans, you can have a different drying process and a different aroma to the beans. We have more than 40 different flavours and our customers can choose a specific variant of vanilla planifolia. Like in coffee, when you're roasting coffee in a different way you can get a different taste.”

“The story of innovation is [in] the entire production chain. Our technology is not only in one specific place,” explains Oren Zilberman, Vanilla Vida’s CEO. “It's actually in all the production, from [...] when we are growing the vanilla in climate-controlled greenhouses until the end. “The end product is the same dry vanilla bean you find in countries like Madagascar, Indonesia, Mexico and more.”

Despite vanilla’s ubiquity, its production is a ‘niche market’, Zilberman says. The coffee and cocoa industries, for instance, are highly saturated markets with “too many competitors, too many challenges, while vanilla has been left behind”, says Zilberman.

Today, supplies of many crops, such as cocoa and vanilla, come from developing countries where production costs can typically be lower. With data and technology, the startup is offering a method of production expanding to new markets and geographical locations making growing vanilla a possibility anywhere in the world.

Most of the world’s vanilla comes from Madagascar and Indonesia but relying on just a handful of top producers for global supply can create a volatile market. Equally, climate change can affect cultivation and farming cycles at source which is a challenge the company says it is tackling with its climate-controlled greenhouses.

“It’s one of the biggest challenges,” says Zilberman. “Your supply risk is much less because you are not dependent on the weather. You depend on your results. We are Mother Nature. We control the weather, the temperature, the humidity, and if we need to plant. Our supply chain is going to be much better regarding risk mitigation compared to anywhere in the world.”

The company has a collaborative approach to vanilla production that ensures their technology feeds into existing supply chains and new developments are also shared amongst farmers.

“We are already working with farmers in Uganda, Tanzania, and India. So, we are already sharing some of our knowledge with existing farmers and this is part of our story and we believe it's going to be even better and stronger in the future. Again, expanding the markets for everybody.”