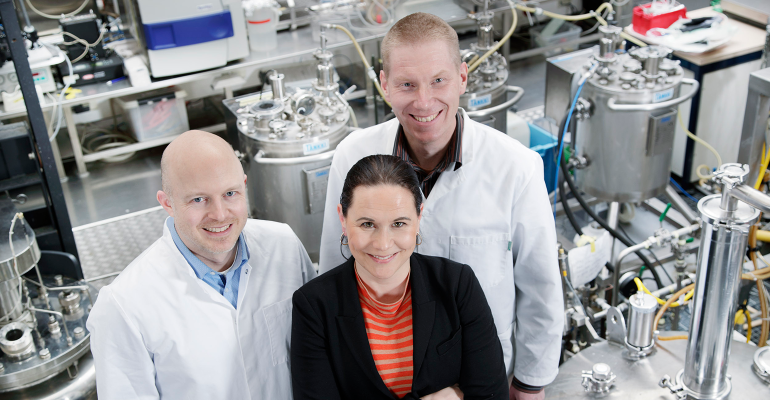 Precision fermentation startup Onego Bio is preparing to scale up its animal-free egg white, Bioalbumin™, that offers the functionality of egg white without the volatility of the egg supply chain. “Bioreactors are the next-generation hen house,” it says.

Developing an ingredient that has the functional capabilities of egg – as well as its natural, clean label composition and healthy nutritional profile – is hugely challenging.

Egg white is used as a binding agent because it coagulates when heated and as a leavening agent in baked goods. It also adds creaminess to desserts; prevents ice crystallisation in ice cream; gives viscosity to drinks such as cocktails; and acts as an emulsifier in dressings and sauces. Adding egg protein to a recipe, be it an industrial formulation or home-cooked dish, contributes to fluffiness, colour, flavour, texture, aroma, and overall appearance, as well as boosting the nutritional content.

Despite their multi-functional use, there are reasons for manufacturers to seek out egg substitutes.

In addition to the carbon impact of egg production and the animal welfare considerations, the egg protein and shell egg markets are highly volatile, subject to huge fluctuations in supply and price due to outbreaks of disease and seasonal demand.

In 2014 and 2015, 33 million egg-laying hens were culled in the US to limit the spread of Highly Pathogenic Avian Influenza (HPAI), and this led to a price increase of 36%, according to the Economic Research Service of the United States Department of Agriculture (USDA). Between November 2021 and May 2022, France culled over 19 million birds to contain a bird flu outbreak.

Bioreactors are the ‘next-generation hen house’

Precision fermentation promises to add another source of eggs to food formulators’ toolbox. Finnish startup Onego Bio genetically engineers cells from the fungi, Trichoderma reesei, so that they start producing ovalbumin, the major protein of egg white, instead of their own proteins.

According to brand and communications manager Laura Toppinen, its ingredient can match chicken egg white for functionality “without the downsides of chicken egg production”.

Founded in February 2022, the early-stage startup is a spin-off from VTT, the Finnish research institute, that has been developing this egg white technology for several years.

"Even though there are other companies that have a longer journey [than us], we are in a very good place already with our technical development,” said Toppinen.

To differentiate from animal-derived egg white, Onego Bio calls its ingredient Bioalbumin™ it has trademarked the name), using the suffix bio to indicate the use of biotechnology. 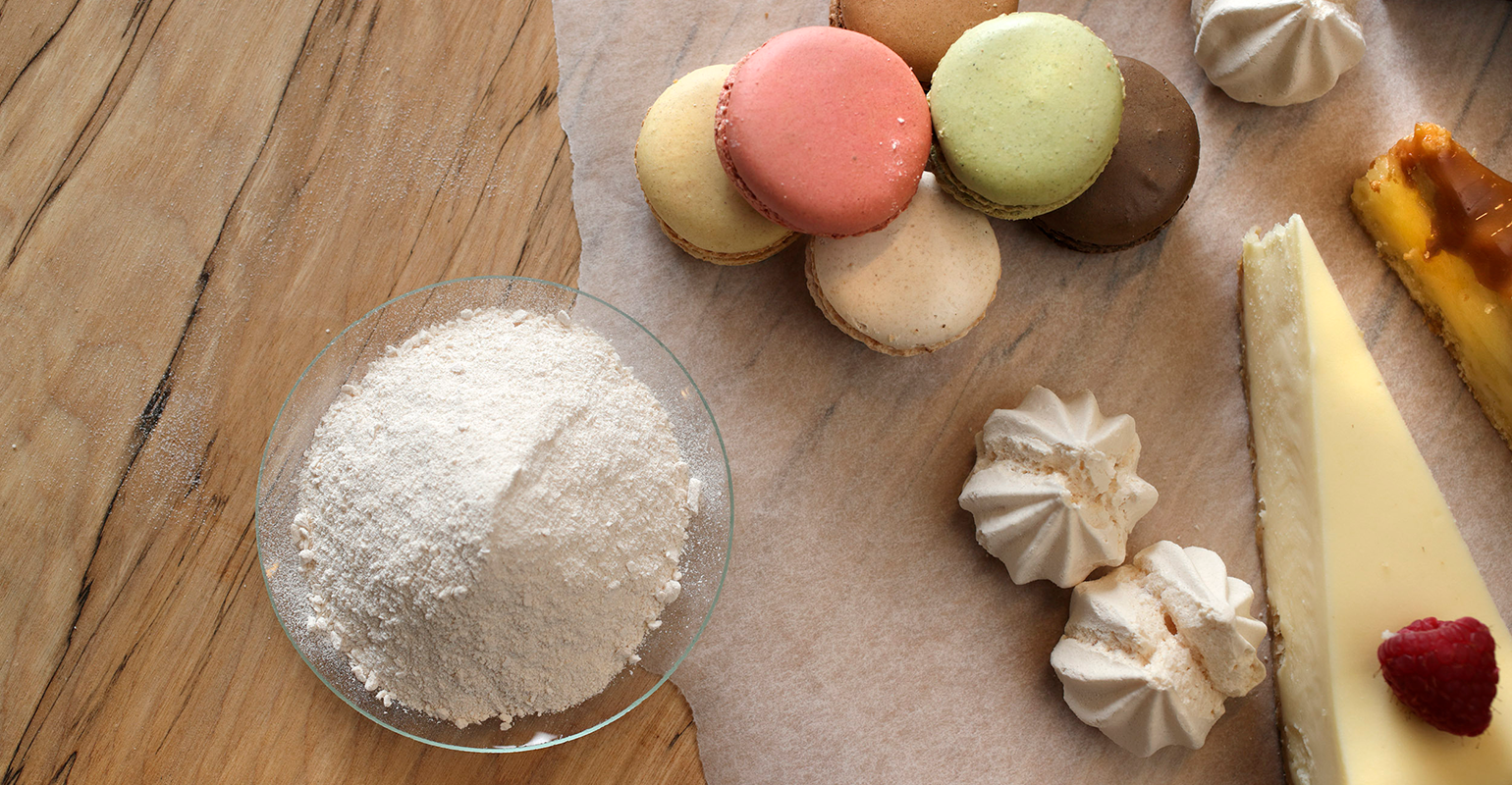 Helsinki-headquartered Onego Bio is currently in the pilot stage but, in September this year, announced a partnership with Perfect Day’s enterprise biology business, nth Bio, to speed up its go-to-market time.

Seen as a trailblazer in the precision fermentation space, US scale-up Perfect Day first commercialised its animal-free dairy protein several years ago. More recently, it set up nth Bio to help other synthetic biology companies develop products and scale, offering expertise on issues such as strain engineering, intellectual property, and manufacturing.

"The idea is to get into the market faster with their support so they will be helping with regulatory approval, building the pilot production, and scaling. It's a great collaboration,” Toppinen said.

“We use the same microbial platform as they do to produce dairy proteins,” she added. “[We use] Trichoderma reesei, which is a fungi, and it's our sustainability superhero who produces the protein. We truly believe that it's the most efficient and productive technology there is. There are many other platforms, for example yeast platforms, but we believe ours will be able to scale.”

The Finnish startup plans on entering the US market before Europe as it takes longer to get novel food approval from the European Food Safety Authority (EFSA) than Generally Recognised As Safe (GRAS) status in the US.

It is currently looking for production and manufacturing partners but already foresees being a strong competitor to conventional egg powder.

“We have made some calculations with our [foreseen] production capabilities that we would be able to get the price point even lower - around 20% lower – [than] animal-based egg white protein powder. So, we are aiming for a mass production product,” Toppinen said. 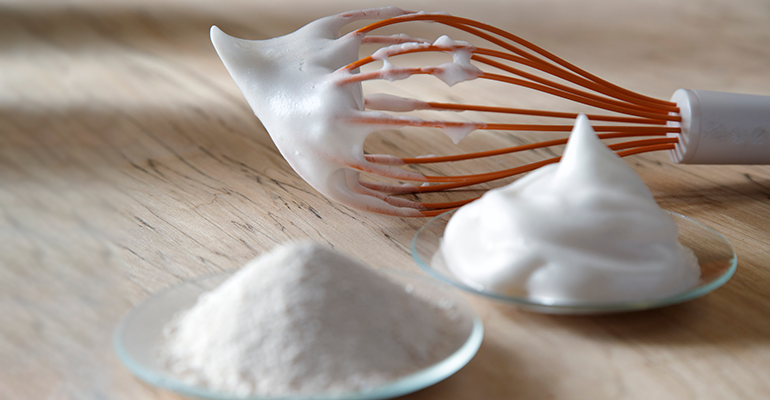 The startup is already looking to the future, identifying ways it could improve egg as an ingredient for food brands.

Eggs and egg-derived products, for instance, are one of the 14 major allergens that must be declared on-pack in the EU. Onego Bio’s ingredient is molecularly identical to conventional eggs, meaning it is allergenic as well. According to Toppinen, removing this allergen is a future task for its R&D team.

“That will be an important step,” she told Fi Global Insights.

It is also working on a research project to valorise the biomass material – mycelium – that is generated as a side stream of the fermentation process.

One possible application is for an animal-free leather; when pressed down, combined with other compounds, and dried, the mycelium has leather-like features. Another application could be biodegradable packaging.

“It's very exciting but we are still [evaluating] what we could do,” said Toppinen.