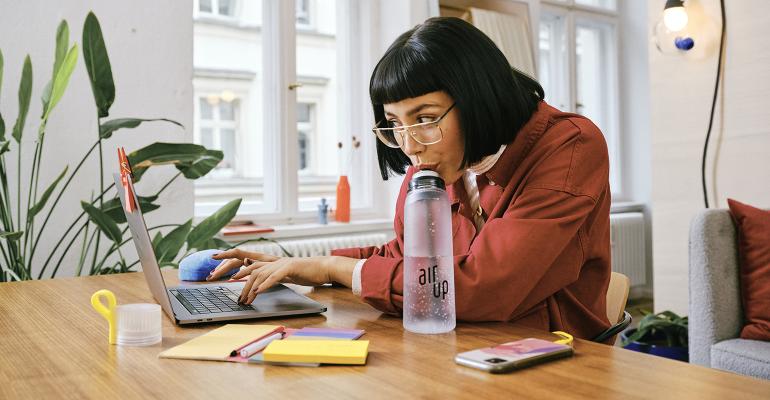 An oft-quoted fact holds that between seventy-five and 95% of what we commonly think of as taste actually comes from the sense of smell.

According to Professor Charles Spence, head of the Crossmodal Research Laboratory at Oxford University and expert in multisensory perception, there is little empirical evidence to support this claim. Nevertheless, most researchers agree that olfaction plays a “dominant” role in the tasting of food, Spence says, and this has significant implications for the food industry.

“Crucially, the evidence suggests that it can sometimes inspire the modernist chefs, not to mention the culinary artists and designers, to change the way in which they deliver multisensory flavour experiences to their customers in order to capitalize on olfaction’s often dominant role in our perception of food and drink,” Spence writes in an open-access article in Flavour journal.

Air Up is a German start-up that has combined neuroscience and design to create a drinking system that flavours pure water using scent alone, without the use of additives.

Lena Jüngst, Air Up’s CEO and Tim Jäger, its CTO, came up with the concept while studying product design at the University of Design in Schwäbisch Gmünd in Germany. They designed the first prototype of the Air Up bottle as part of their bachelor thesis on the topic ‘Neuroscience meets Design’. After graduating, Jüngst and Jäger patented their idea and were joined by Fabian Schlang, nutritionist and student in food technology, who helped develop the bottle prototype further as well as the flavours and carriers.

“By transporting scent through air and by using the biological effect of retronasal olfaction we create an impression of taste that is actually scent,” it says. “To explain briefly: Our brain distinguishes between orthonasal (perceived via nose) and retronasal (perceived via mouth) scent. While orthonasally perceived smell is also interpreted as such by our brain, retronasally perceived scent is interpreted as a part of our taste impression and our brain attributes it to food or drinks in our mouth. This biological connection made it possible for [us] to flavour simple tap water with a multitude of tastes only via scented air.” 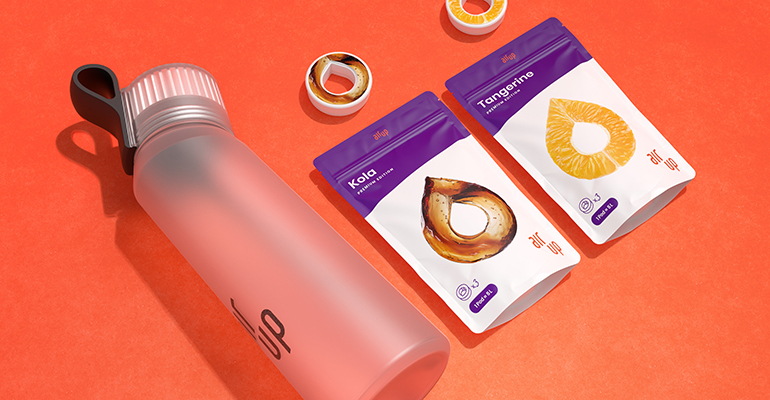 So, how does it actually work for the user? Consumers fill the 650-ml Air Up bottle, made from BPA-free Tritan and food-grade silicone, with still or sparkling water and then attach the scent pod.

When they drink the water using the straw, the silicone attachment draws up both water and air, which passes through the flavour pod.

“This is where retro nasal olfaction comes into play,” says Air Up. “In the throat, the flavoured air rises from the water and is perceived as taste at the olfactory centre. One could say you tricked your brain and saved your body from proven harmful sweeteners, stabilizers or acid regulators.”

The aroma pods are made from natural flavours, extracted from fruits, plants, and spices, and consumers can choose from a range of flavours including apple, lime, orange-passion fruit, peach, raspberry-lime, cherry, cucumber, tangerine, and coffee.

One pod can flavour five litres of water, and the flavouring function can be deactivated if the consumer wants to drink plain water. A starter pack comprising a bottle and two pod packets retails for €34.95 via the start-up’s website while a pack of three refill pods costs €6.95.

The company says it is contributing to reducing the impact of two pressing issues of our era – plastic waste and poor nutrition – and, in 2017, it was chosen to take part in the European Union’s Climate KIC program, which supports sustainable start-ups.

“While a scent pod is sufficient to aromatize at least five litres of water, a consumer would have to buy five to ten PET bottles for the same amount of any other drink. This saving, in turn, leads to great logistical potential. As it reduces the weight and volume of goods on aircrafts, container ships, and trucks from the producer to the supermarkets and, from there to our homes.”

After an initial product launch in Germany in 2019, Air Up has rolled out its products to the UK, France, Italy and other European countries.

Air Up positions itself as an alternative to current on-the-go beverages that, due to their sugar content and single-use plastic containers, are bad for both health and the environment, and it has already attracted attention from one of the biggest soda manufacturers in the world, PepsiCo.

In 2020, Air Up raised a reported €18 million in a Series A round with investment from PepsiCo, Oysterbay, Five Seasons Ventures, and others.

“In such a short period of time, Air Up has delivered exceptional traction in a market where the consumer needs are known to many: more hydration, the reduction of single-use plastic bottles, and increased consumption of healthy drinks,” Manzoni said. “The latest capital raise will fuel the company to expand to a global stage, to make scent-based hydration the new normal.”