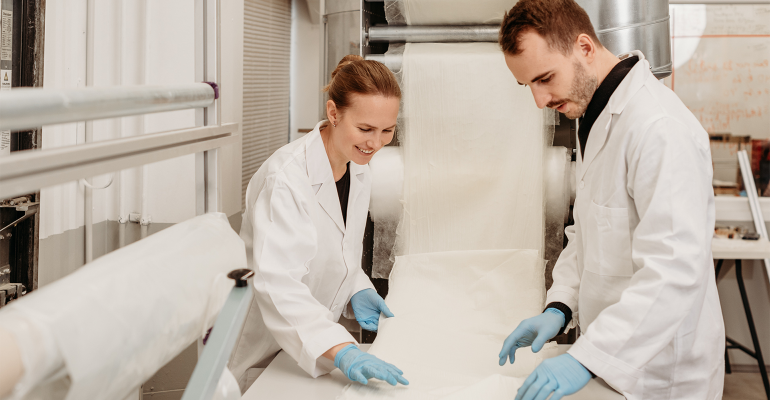 Estonian startup Gelatex has developed a patent-pending technology that uses plant-based polymers to produce 3D scaffolds for cell-cultured meat that resemble the structure of meat tissue more than any other alternative scaffold – and are cheaper.

Cellular agriculture is allowing scientists to remove animals from the meat supply chain by growing meat cells, identical to those taken from cows, pigs or chickens, in bioreactors. However, in an animal, these meat cells are held together by the extracellular matrix (ECM), which maintains tissue elasticity, creates adhesion points for cells, and provides a three-dimensional (3D) environment.

Cell-cultured meat companies must therefore provide a scaffold to transform their mass of meat cells into structured muscle tissue. Without the scaffold, the unstructured cells would resemble paté more than a steak.

Tallinn-headquartered Gelatex says it has developed a nozzle-based, solution-spinning technology for nanofibre manufacturing that is faster, cheaper, and more functional than the widely used alternative, electrospinning.

“Ultimately, what we have created is a platform technology to convert different raw materials and, in this [cell-cultured meat] industry, convert edible plant-based proteins or polysaccharides into nanofibers. Our technology works with different raw materials,” CEO and co-founder Märt-Erik Martens, said, adding that it uses plant-based ingredients, such as soy, pea, and a blend to make its scaffolds.

“We need high-performance materials but at the same time [...] we need to achieve price parity [with meat]. Our solution is the only one on the market that would deliver the scale as well as performance, and even added performance compared to other nano-fibres on the market. This comes from the morphology that our materials provide.”

Nanofibres are 100 times smaller than a strand of human hair. While the diameter of Gelatex’s scaffolds is in the nano range, the length of its fibres can be multiple centimetres, which makes it ideal for creating whole cuts of meat, it says. It can also adjust the fibre diameter, porosity, density, and thickness depending on the final application.

The startup claims that its patent-pending process yields products that are significantly cheaper than current popular alternatives, such as electrospun and hydrogel solutions. These are 90% more expensive than Gelatex’s scaffold, which is cheaper thanks to a higher production throughput and the fact that it needs 28% less electricity.

“Currently, one kilogram of scaffolding material costs about €100,000. Today, because of our technology, we are able to produce nanofibrous scaffolds at a price less than €1,000 per kg easily. If we stay true to our ambitions and keep scaling our technology, it will cost only €40 in less than five years," said Martens, when the company announced its successful seed round last year in which it raised €1.2 million, led by Change Ventures and Crosslight Partners.

A 3D structure with tuneable parameters

Gelatex’scaffolds have a 3D structure that is akin to meat. While the surface of electro-spun nanofibers provides suitable adhesion for meat cells, they are planar materials.

“In cultured meat, you want to achieve a 3D tissue; that’s what meat is,” Martens told Fi Global Insights. “And for that, the material can’t be planar, it needs to be 3D so the cells can migrate into the material, resulting in a 3D construct of the cells and the scaffold together.

“This is exactly what our materials can do, and other scaffolds can’t do,” he said, adding that mycelium-based scaffolds have several limitations because it can be difficult to control the material’s properties such as the pore size, material thickness, and even the chemical composition.

Gelatex produces scaffolds in a continuous line in rolls, which can be cut to the customer’s required sizes. Since it works with food-grade raw materials, such as plant proteins, that it restructures and converts into different shapes, it does not require novel food approval for the European Union market.

(It has identified a way to amplify the performance of its scaffold by adding extra-cellular matrix proteins to the fibrous surface and inside the fibres, which further induces the cell’s ability to grow; however, such materials are not currently used in foods and would require novel food approval.)

From microalgae to mycelium: Scouting out other scaffolds

While Gelatex claims its scaffolds are superior, other companies are opting for different techniques and source materials. Barcelona-based Novameat, for example, uses a 3D printer to produce ‘biocompatible’ plant-based scaffolds for cell-cultured meat companies.

Meanwhile, Canadian company Evolved, formerly known as CaroMeat, says it has developed a method to produce cell-cultured meat that removes the need for exogenous materials such as scaffolds or binders.

Evolved, which recently raised $2 million in its seed round led by Maple Leaf Foods and Big Idea Ventures, grows muscular cells in the form of thin sheets. This means that each cell sheet can directly access the nutrients it needs via the surrounding medium rather than requiring a complex vascular network. Once the paper-thin sheets are grown, they are assembled into layers. These layers naturally bond to one another, and the result is highly dense, multi-cellular, textured tissues, it says.