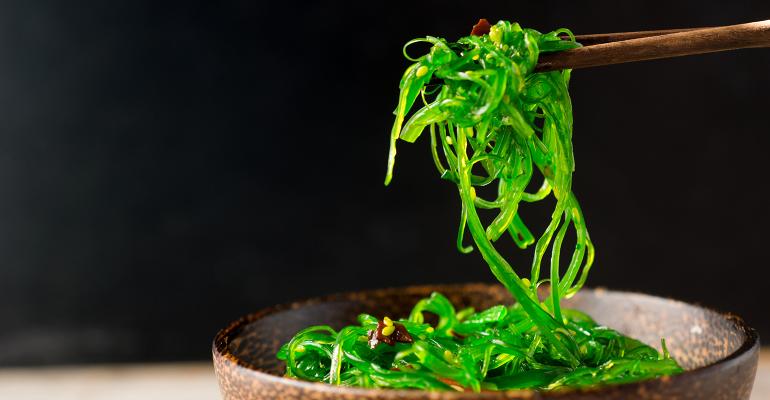 Plant-based and packed with nutrients, algae are becoming star ingredients across food categories – but blending them with familiar ingredients in convenient formats is still best for consumer acceptance, according to three seaweed start-ups.

Fuelled by the boom in plant-based eating and health and wellness, however, seaweed is taking centre stage as a key ingredient in new product development. Algae tend to be high in minerals, such as iodine, rich in fibre and polyunsaturated fatty acids, omega-3 and omega-6, and can be sustainably produced without freshwater.

There are also plenty of varieties to choose from; around 221 species have commercial value and around 10 are intensively cultivated, creating a global seaweed industry that is worth more than US$6 billion each year, according to the United Nations’ Food and Agriculture Organization (FAO).

A natural and healthy image

Their versatility also means they can be added to a wide range of food and drink categories, with new product launches in recent years attesting to this.

Julia Büch, food and drink analyst at Mintel, said seaweed was gaining popularity both as a base ingredient and as an added flavour in premium-positioned launches.

“Its natural green colour means that it can be used to achieve or support an image of health alongside other literally ‘green’ ingredients such as kale or wheatgrass,” she wrote. “While finding a natural home in smoothies, algae are also infiltrating other drink categories, such as flavoured water and spirits. Moreover, launches of algae-based burgers, steaks and sausages are slowly gaining traction in Europe.”

The consequences of poor eating habits and the high cost of animal protein is also attracting consumers to consider algae as a sustainable and economical protein source, according to Mintel.

It conducted a 2,000-strong survey in 2019, which found that 36% of US consumers and 40% of Canadians were either currently eating algae as a protein source on a regular basis or were interested in trying it. In France, meanwhile, 38% saw marine protein and algae, such as spirulina, as a healthy, non-traditional protein source.

Thanks to these associations, seaweed has been embraced by plant-based food manufacturers of vegan seafood alternatives. 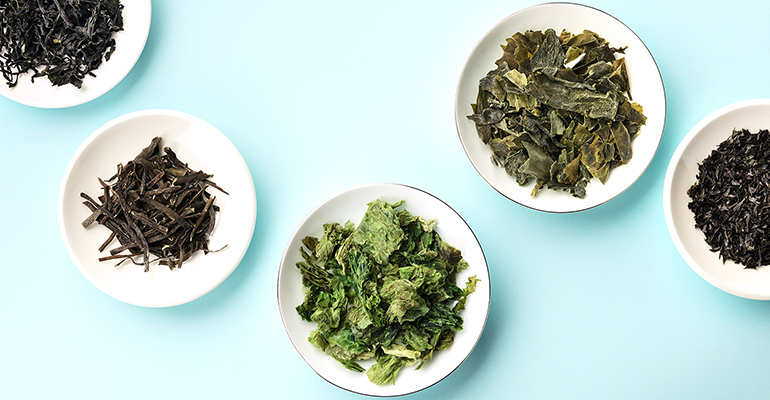 New Wave Shrimp, a US start-up founded by a biomedical engineer and an oceanographer, uses sustainably sourced seaweed and natural flavours to make a plant-based shrimp (prawn) alternative. The plant-based ingredients give the product a “briny, lightly savoury and subtly sweet” flavour that replicates the taste of shrimp while the product is suitable for people suffering from a shellfish allergy, it says.

Other companies, such as Good Catch, use a blend of pea, chickpea, lentil, soy, fava and navy beans to mimic the texture of flaky fish but add in algae oil to improve the flavour and boost the nutrient profile.

‘Hidden’ seaweed is more acceptable to most consumers

Willem Sodderland is CEO and founder of Seamore, a Netherlands-headquartered seaweed start-up. Its flagship product, launched around five years ago, was seaweed ‘pasta’ made from whole, dried himanthalia, a variety of algae with a natural spaghetti-like shape.

“There is a small and growing segment that is keen on seaweed’s ‘pure’ application as a new veggie food. But for a much larger segment, seaweed as a visible, whole ingredient is one bridge too far, no matter how attractive and accessible it is marketed,” Sodderland told Fi Global Insights. “‘Pure’ seaweed is asking too much from this segment, both in practical terms - cooking, finding it in stores - and psychological terms - what is it, isn’t it fishy etc.

“For this segment, we started developing hybrid, ‘powered by seaweed’ products such as wraps, chips, and bread. There is no need to learn new skills or cook and they are very close to the normal alternatives in taste, texture, and price.”

It describes its product portfolio of pasta and seaweed-flavoured snacking popcorn as “seaweed infused consumer packaged goods” made with ulva, kelp, wakame and kombu.

Blue Evolution said its clean label, two-ingredient pasta – made from wheat and seaweed – adds a healthy twist to standard pasta and is a good source of bioavailable iodine, magnesium, and iron, with one serving providing 20% of the recommended daily allowance of iodine. Blending seaweed with wheat creates a “delicate and mild flavour [that] enhances any dish with a subtle umami punch”, it said.

Even in important producer countries that have a tradition of eating seaweed, making algae part of the daily diet can be a challenge.

According to the FAO, Chile was the world’s leading producer of wild harvested seaweed in 2015, with an annual harvest of 345,704 tonnes. In the South American country, algae is well known and a type of kelp known as cochayuyo (Durvillaea antarctica) is a common sight in supermarkets and markets.

However, consumption has been falling in recent decades.

“The truth is that the consumption of algae in Chile is quite low, the vast majority is exported for the production of phycocolloids,” said Alejandra Allendes, co-founder and director of Chilean seaweed start-up Quelp.

“People have a bad perception of them and do not like their taste, aroma or texture, but that is also because it has been poorly cooked or the seaweed is not of good quality. For example, the traditional drying procedure is with direct sun for several days, which oxidizes them.

“However, the trend of healthy eating and of plant origin has gained more followers, which has allowed people to learn about how nutritious the algae are and their benefits, so there is a greater interest to consume them but in known formats like ours.”

Quelp uses cochayuyo and calabacillo, wild-harvested from the Pacific coast of central Chile, which it adds to vegetarian burger patties and meatballs. In addition to domestic sales, it is planning on exporting to Argentina, Germany, and the US.

Allendes said the main benefit of adding seaweed to plant-based foods was nutritional, but it also provided a unique flavour and chewy texture, an important differentiator from other vegetables.

“Added to the interest in new foods and the positive social and environmental impact, [algae have] great potential for acceptance,” she said.

Is your start-up making waves in the world of food innovation? The fifth edition of Fi Global’s Start-up Innovation Challenge is now open for entries. Submit your application to take your business to the next level.