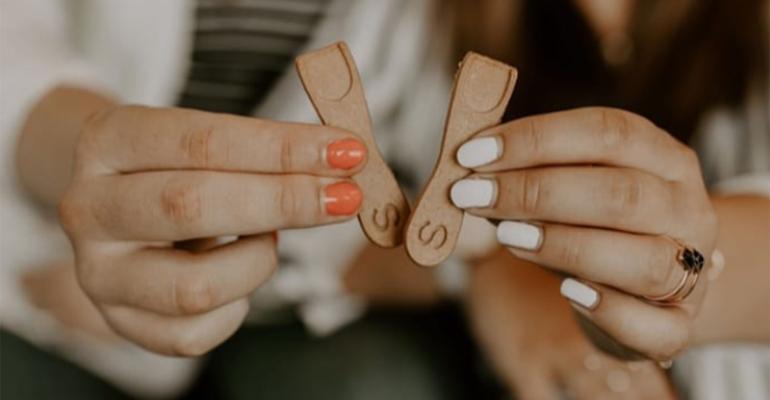 With the EU ban on single-use plastic set to take effect next year, the race is on to find sustainable alternatives. One German startup making edible ice cream spoons from cocoa pod fibre believes it has found a circular economy solution.

Plastic packaging is cheap, durable and versatile, and offers food manufacturers huge advantages in terms of extended shelf-life and improved food safety and quality. However, single-use plastics have low recycling rates, and much ends up as litter.

Global plastics production has increased twenty-fold since the 1960s and is expected to double by 2036, according to a European Union report. Today, around three-quarters of the marine litter in the world’s seas is plastic. This litter breaks down into smaller pieces and residues that is eaten by marine species, such as turtles, seals and whales, but also fish and shellfish, making its way back into the human food chain.

Last year, European politicians voted to ban single-use plastics by 2021. Items such as single-use plastic cutlery, plates, straws, cotton bud sticks, and balloon sticks will all be banned in the EU, creating new opportunities for sustainable, biodegradable or edible alternatives.

Spoontainable is a German startup that makes edible spoons for ice cream using the fibres of cocoa pod husks that otherwise go to waste. The company supplies more than 300 customers already, mostly in the catering and foodservice sector, and it estimates that, since launching in 2019, it has substituted more than two million plastic spoons with its eco-friendly alternative.

The vegan spoons have a crunchy texture and biscuit taste Julia Piechotta, manager and co-founder of Spoontainable, and they stay crunchy for up to one hour during use – plenty of time to finish the tub of ice cream before eating the spoon.

Unlike some edible utensils that don’t necessarily ‘match’ with the eating or drinking occasion (who wants to eat a pasta straw after finishing a strawberry cocktail?), a chocolate wafer-like ice cream spoon seems more intuitive.

“We are using the fibres of the shell of the cocoa bean in order to get a spoon with a high stability,” Piechotta told Fi Global Insights. “These residuals are high in dietary fibres and perfect for our upcycling philosophy. We add some flavours for the stability and [the final product] is like a cookie. If you eat the spoon without ice cream it is very crunchy but after eating your ice cream or dessert with it, it gets much softer and tastes like the ice cream or dessert.” 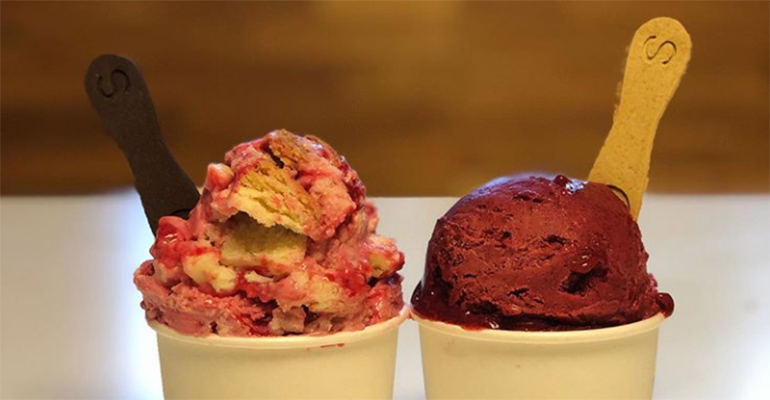 Piechotta met her business partner Amelie Vermeer while they were both completing master’s degrees at the University of Hohenheim. They began discussing ways to reduce single-use plastics while eating a tub of ice cream and Spoontainable - the name is a portmanteau of the words spoon and sustainable – was born.

“We are facing huge plastic consumption and industrial food waste,” said Piechotta. “Every year billions of plastic cutlery pieces are thrown away in the European Union after using them once. Especially in the [takeaway food] area, we need alternatives for plastic cutlery due to the pollution of the environment.

“At the same time, tons of shell residuals like the shells of the cocoa bean are thrown away and not used. By transforming them into fibres we can create a totally sustainable solution: the edible spoon."

“We want to show, how easy a sustainable lifestyle can be by changing small things. We hope that more people are going to think out of the box and change their habits in order to consume more sustainable."

The startup, which this year was selected to take part in both the EU’s EIT Food Accelerator Network and Startup Innovation Challenge,  achieved its first pre-seed round this year and plans to launch the next round at the end of 2021, aiming to raise funds to expand its portfolio to include knives and forks.

Finding the right formulation for edible cutlery that can withstand hot or liquid applications will be a challenge but Piechotta said they hope to have the first prototypes ready next year.

Spoontainable’s edible spoons cost between four and seven cents compared to bio-degradable cutlery, which is around one to three cents.

Market research company GlobalWebIndex surveyed over 3,800 US and UK consumers on their perception and behaviour surrounding sustainable packaging in 2019. It found that 53% of individuals surveyed said they had reduced the amount of plastic they used in the past 12 months. It also found that age had an impact on priorities, with affordability more important by 20 percentage point difference for consumers aged 55-64 than for those aged 16-24.

“Clearly, sustainable materials are more of a consideration for younger consumers. This might partly be because younger generations grew up during the height of the sustainability crisis and are generally considered to be more eco-conscious than their older counterparts,” the report suggested.