Changing rice production to get more crop per drop 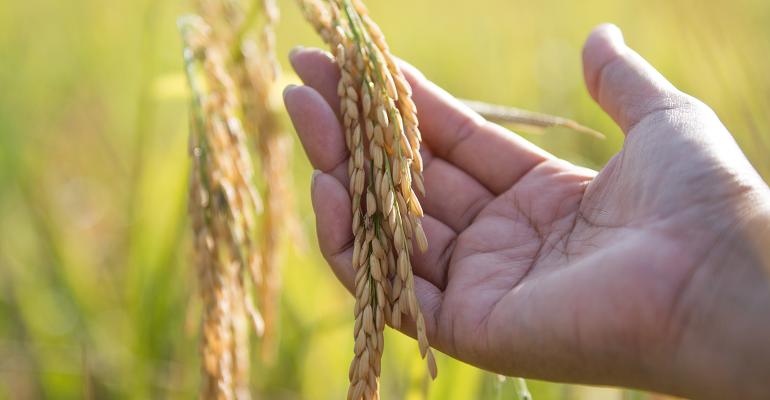 Rice may survive in water but it doesn’t thrive in water – and changing the way it is grown can have a significant impact on water usage, greenhouse gas emissions, and even nutrition.

Rice is one of the largest food crops in the world, providing daily nourishment to billions of people around the world.

However, growing rice uses as much as one-third of the world’s developed freshwater resources and generates up to 20% of human-generated methane emissions.

The United Nations’ Food and Agriculture Organization (FAO) has called for investment in various climate-smart rice production technologies and practices that can increase the resilience of farming systems to climate change and reduce emissions, while maintaining productivity and farmer livelihoods.

One problem, according to the FAO, is that the private sector will only engage in climate smart agriculture if this has an impact on its balance sheet – and a significant barrier to investment is that rice is seen as a food staple, unlike premium-led commodities such as cocoa and coffee.

A number of initiatives are striving to change this. The Sustainable Rice Platform (SRP) is a multi-stakeholder alliance that certifies producers who adhere to its sustainable rice standards. In 2020 and with UN funding, it launched the SRP-verified ecolabel to help shoppers identify rice that has been sustainably produced.

California-headquartered Lotus Foods is also working to raise rice’s reputation from a basic staple to one that can be sustainable, ethical and even gourmet. Since 2009, it has sourced rice from organic family farmers that use a growing process called ‘System of Rice Intensification’ (SRI) for its consumer-facing products that include packaged rice and rice-based products such as noodles, crackers and instant ramen cups.

The SRI process, which it also calls ‘More Crop Per Drop’, involves planting smaller, younger seedlings to reduce transplant shock, planting them at wider spacing in rows – rather than randomly in clumps – to minimise competition and facilitate weeding, and keeping soils moist but not continuously flooded to promote soil health.

Although rice can survive in water, it doesn’t necessarily thrive in water, says Lotus Foods, and by not growing rice in flooded paddy fields, farming communities have more water for other uses while methane emissions are cut by up to 40%.

Co-founder and co-CEO of the company, Caryl Levine, said she believed its sourcing policy was an example of how brands can have a positive impact.

“Our commitment to preserving biodiversity, organic agriculture, fair trade and More Crop Per Drop practices are based on what we believe is necessary and right to transform our food system – not for a halo effect,” she told Fi Global Insights.

“Prior to 1960, some 100,000 distinct varieties were cultivated by farmers around the world. Most have been replaced by a handful of varieties grown in monocultures. A narrower genetic pool means that farmers have less capacity to innovate and adapt to climate change. The loss of genetic diversity in rice is also often accompanied by the loss of local knowledge and culture and the disappearance of varieties with nutritional and medicinal properties. Our pioneering efforts to market heirloom rice and especially black and red pigmented rice have led to a renewed interest in and conservation of rice biodiversity.” 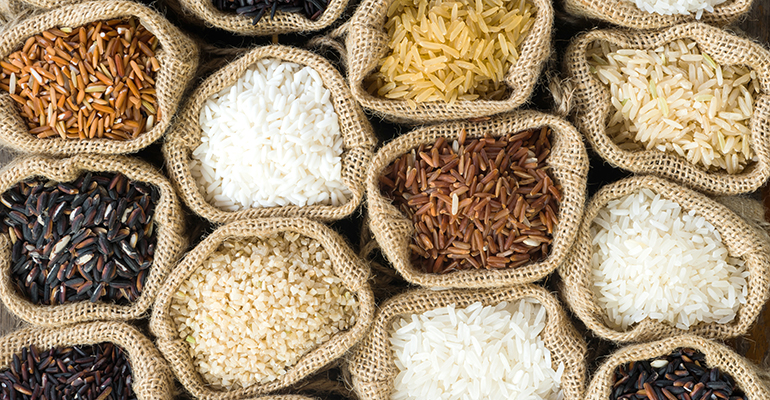 Some studies have shown that the nutritional quality of rice grown using conservation agriculture methods, such as SRI, can increase the accumulation of micronutrients such as zinc, copper, iron and manganese.

But does the rice taste any different? Lotus Foods can’t say whether the quantity of water used during cultivation impacts the flavour of the grain – although the heirloom varieties it sources have their own subtle flavour profiles.

The pink rice, grown by Indonesian family farmers, has aromatic notes of cinnamon and clove; the Jasmine rice from Cambodia with a delicate floral aroma; and the black-purple rice, grown by Chinese family farmers in the north-east Black Dragon River region, has a roasted, nutty flavour.

However, one factor that does impact the taste of rice – and all foods - is the concept of ‘terroir’, said the CEO.

“[Terroir] is the term often used to characterise wine, and is a combination of soil conditions, water quality, plant management, and local agroclimatic conditions,” said Levine. “Just imagine a tomato you buy in the grocery store and compare it to a tomato grown in your garden or purchased at a local farmer’s market. The taste is very different.”

Many consumers today are aware of the negative environmental impact of certain commodities from soy-driven deforestation in the Brazilian Amazon to habitat loss in south-east Asia due to palm oil, and consciously look for more sustainable alternatives on supermarket shelves.

Consumer awareness of sustainability issues linked to rice production is not at this level but Levine said it may be growing, particularly in drought-prone regions such as California where the public is mindful of water usage.

“It’s hard to say how many consumers may be moderating their purchases based on a better understanding of issues around rice production, though increased sales of our rice suggests that our message is getting across,” she said.

Pro-active steps to scale up sustainability

The challenge going forward is to scale up production of sustainably sourced rice. According to Levine, the most pro-active step consumer packaged goods (CPG) companies can take is to invest in regenerative agriculture practices, which seek improved biodiversity outcomes at all levels from soil microorganisms to landscapes.

Support at a public policy-level is also needed, say researchers at the non-profit International Maize and Wheat Improvement Center (CIMMYT).

Researchers from CIMMYT teamed up with scientists from the Borlaug Institute for South Asia (BISA), Punjab Agricultural University and Thapar University, and found that rice and wheat grown in India using a sub-surface drip irrigation and fertilising system combined with conservation agriculture approaches — such as zero till and dry seeding — used at least 40% less water than flood irrigation for the same amount of yields.

However, the Indian government currently provides farmers with subsidies for water and other inputs, irrespective of efficiency, said Mangi Lal Jat, cropping systems agronomist at CIMMYT and lead author of the study. In order to support farmers to adopt more efficient practices, the government should incentivize only systems that use resources sustainably, he said.

“Shifting from age-old practices to more sustainable practices takes some time but with improved knowledge and skills and enhanced capacity, early adopters and champions have begun this transition that may be further enhanced to achieve the impact at scale through policy changes.

“If consumers are more committed to natural resources and environment and if they like to eat the food produced with fewer environmental footprints, this can help in scaling and adoption,” Jat added.