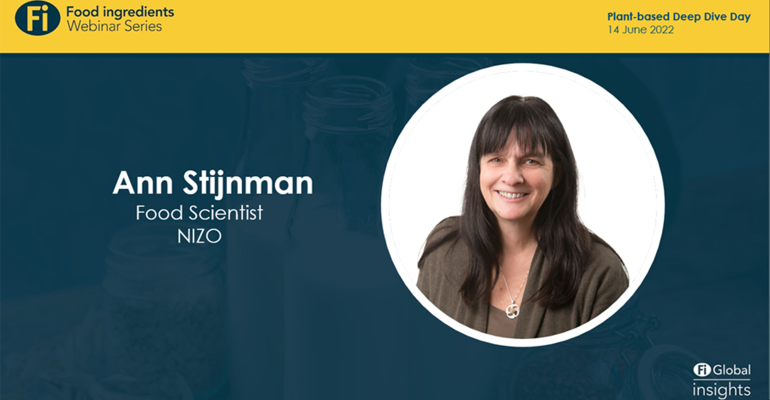 Off-flavours are commonly found in plant protein ingredients. What methods can manufacturers use to identify and remove off-flavours from their end products? We asked Ann Stijnman, senior project manager at NIZO Food Research.

Ann Stijnman will be taking part in the Plant-based Deep Dive Day on 14 June, part of the free-to-attend Fi Webinar Series. Click here to sign up.

Ann, what is your career history and current role?

“I graduated from the Wageningen university with a master’s degree in food science. I spent 17 years working at a large flavour company where I carried out research on the chemistry and sensory aspects of flavours.

“Currently, I am a senior project manager at NIZO, a commercial research institute which conducts research and runs projects for the food industry.”

You recently conducted a study around off-flavours in 30 plant protein ingredients. Please can you provide an overview and summary of the main findings of the study?

“What we did in one of our studies was to analyse the volatile compounds in 30 plant- based protein ingredients, and what we found was that similar volatile compounds were present, but in varying amounts. The type and concentration of the compounds are what really defines the flavour profile of the ingredient.

“This is dependent on the plant protein source itself, but also has a lot to do with the processing that the ingredient undergoes. How plant protein ingredients are processed can have a significant influence on compound composition, concentration, and therefore flavour.”

How was this research conducted?

“First of all, we analysed the extracts of the plant protein ingredients by running them through a gas chromatograp (GC) and identified all of the volatile compounds present, using mass spectrometry.

“We also had a sniffing port at the end, where sensory experts sniffed the flavour compounds coming out of the GC and identified the aroma active compounds that really matter to the sensory profile of the plant protein ingredient.

“Once we have this [data], we know which compounds are aroma active and which of these have a sensory description related to an off-flavour.”

What are the most common off-flavours and how are these often caused?

“Plant protein ingredients are often perceived as having off-flavours, commonly described as beany, grassy, fatty, earthy, and mushroom, for instance.

“When you mill plant protein ingredients, enzymes are released from the cells and they can, for instance, degrade lipids that are still present in these ingredients. These can contribute a lot to the off-flavours that are perceived by the consumer.”

Which strategies (if any) exist to remove off-flavours from plant protein ingredients?

“There are several approaches that you could take to mitigate off-flavours.

“Another approach you could take is reformulation. For instance, you could tweak your product formulation by adding some oil that could help in lowering the odour threshold value of a specific compound, thereby also reducing the off-flavour.

“Masking is another approach that can be applied, thereby adding flavour compounds that can reduce the perceived off-flavour which are more powerful e.g. or compete with the human odour receptors.

Are there any regulations or guidelines around how these should be listed on ingredients lists?

“The approaches that I mentioned above are not actually different from any other regular product development strategies, so in my opinion, you would not necessarily have to follow any extra guidelines or regulations.”