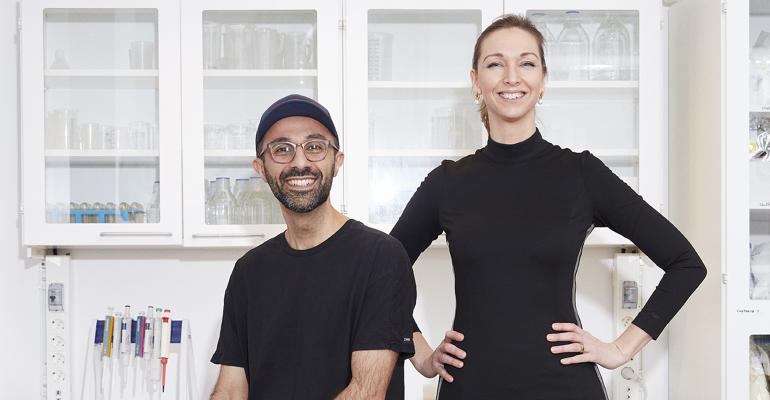 Anja Leissner, co-founder and head of R&D at plant-based startup Stockeld Dreamery discusses finding the right formulation for vegan cheese and how the plant-based category will benefit from developments in synthetic biology.

Non-profit organisation ProVeg has identified plant-based cheese as one of the biggest ‘missing categories’ on European supermarket shelves, meaning it is a potentially lucrative opportunity for product developers. However, plant-based cheese has struggled to make the same inroads as plant-based milk alternatives – perhaps due to difficulties in replicating the taste and texture of dairy cheese.

Anja Leissner admits the category in general has some catching up to do. But she believes Stockheld Dreamery’s first product, a plant-based, feta-style cheese set to launch next month, is well positioned to rise to the sensory challenge.

“I am the hugest cheese lover and I struggle to eat plant-based cheese because the nutritional value is a negative for me; I feel bad after eating them and that’s not acceptable. So, the nutritional profile has to be good but also the sensory experience, because if you don’t enjoy it […], it won’t be a substitute for dairy cheese,” Leissner said. “We need science to create better products because it’s amazing that people are eating fewer animal products, but we need to be sure the alternatives are sustainable with nutrients, vitamins, minerals and all the components we need to be healthy and happy,” she said. “It can’t be just a cheap substitute.”

With several patents pending, the Stockholm-headquartered company (which has recently rebranded from Noquo Foods) was tight-lipped about the exact formulation of the feta alternative but did reveal it uses a protein-base made from two different legumes.

Leissner said: “I enjoy working with legumes because they have a positive contribution to the environmental impact, they bind nitrogen, and also have a good nutritional profile and interesting character. When selecting [a base] you often look at capacities such as emulsifying, stabilising, solubility, gelling capacity, how stable it is in different pH levels and temperatures. So, there’s a very long list of criteria we select from and then prioritise according to the use case.” 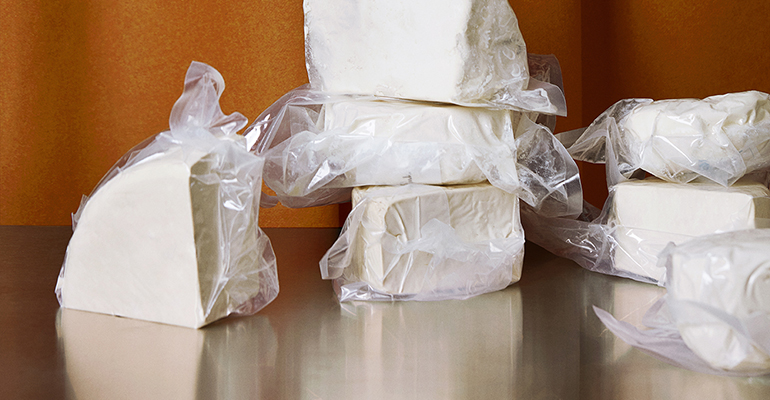 Stockeld Dreamery uses a fat blend that helps achieve the right mouthfeel and texture, a 0.7% starch solution, and ferments its product like dairy cheese.

“We have a high protein content […] and our nutritional profile is very different to [plant-based cheeses] made with starch, coconut oil and flavours,” Leissner said. “There are no preservatives, no coagulants, and hopefully no natural flavours.”

The company, which is currently expanding its team, relocating to new facilities and increasing pilot capability, is in the final stages of formulating the cheese. According to Leissner, it has a creamy texture and mouthfeel with a sharp, feta-like acidity that is produced during the fermentation.

However, the protein isolate can develop some slight off-notes that become more pronounced with oxidation and time, and a natural flavouring would balance this out. It is currently in the process of processing 60 kilos of cheese – 30 kilos with natural flavouring and 30 kilos without – and will conduct tasting sessions to see which is preferred, ultimately letting consumers have the final say.

A vegan cheese that melts well is ‘the holy grail’

Stockeld Dreamery is also working on a spreadable cheese in the pipeline and, what it calls ‘the holy grail of plant-based cheese’: a meltable cheese.

“To get a meltable cheese with a yummy texture, cheese strings, bite resistance, firm fat incorporation that is not released when heated, and a nice browning and sizzling – it’s not an easy challenge. But we hope to get a melting cheese in pilot production by the end of the year,” said Leissner.

Its feta-style cheese, however, is almost ready and will be launched in restaurants around Sweden’s capital at the end of next month before expanding to retail stores.

Leissner, who has a background in biotech, is a fan of synthetic biology and the novel techniques some food companies are harnessing to produce ingredients, such as stevia sweetener without stevia leaves and whey protein without dairy cows.

Although this is an emerging field, products are already hitting the shelves in some regions. US brand The Urgent Company recently launched Brave Robot, an animal-free dairy ice cream made using milk protein produced by the biotech firm, Perfect Day, via a precision fermentation platform.

According to The Urgent Company, the product tastes exactly like dairy ice cream because it is dairy ice cream, just one that has been made without cows.

Does Leissner view such products with admiration but also a degree of trepidation? After all, if consumers can buy dairy products with the traditional taste they love and without the environmental and ethical problems associated with intensive agriculture, why bother with plant-based analogues anymore?

“From a personal point of view, any product on the shelf – if it is another plant-based cheese or one with precision fermented casein – that has a consumer not buy an animal-based cheese, is an amazing product,” she said. “In my eyes, we all have the same purpose and goal, and the more people see it, the more they will buy it, and there will be a positive effect for the other brands out there.”

It is not unlikely that Stockeld Dreamery will add synthetic biology capabilities to its platform at some point in the future, Leissner added.

In the meantime, however, she is convinced its plant-based products will resonate with consumers particularly if the company can engage with them on its purpose and ethos.

“People don’t drink Oatly because it tastes like milk; consumers enjoy what that brand brings to the table,” she said.