Welcome to the permacrisis: How companies can build supply chain resilience 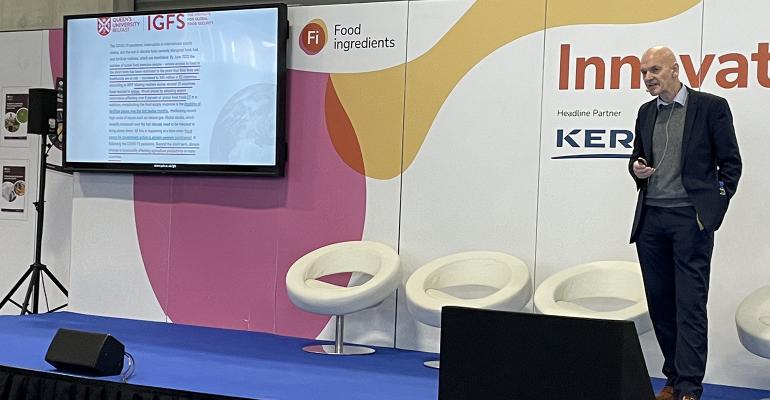 The interlinked nature of the global food system means it is efficient but hugely vulnerable to shocks. As we enter the era of the permacrisis, resilience is crucial – and firms must start by identifying single and cascading points of failure in their supply chains, says food security expert Professor Chris Elliott.

From climate change, natural disasters, and disease outbreaks to financial and political shocks that impact food production and logistics, it seems the food industry has faced one crisis after the other in recent years.

The impact of such shocks goes far beyond the food industry itself or even global hunger: there is a link between soaring food prices and a rise in civil uprisings, protests, and political instability around the world.

However, given the long-term, structural nature of many of the underlying causes, this may well become a permanent state.  In 2022, the Collins English dictionary announced that permacrisis was its word of the year.

“We are going to be permanently in crisis in our food system,” said Chris Elliott, professor of food security and founder of the Institute for Global Food Security at Queen’s University Belfast, speaking at Fi Europe in Paris last month. “These shocks will keep happening as our climate keeps changing and that’s why resilience becomes more important.”

The Swiss university, ETH Zurich, defines food resilience as the capacity, over time, of a food system and its units at multiple levels to provide sufficient, appropriate and accessible food to all, in the face of various and even unforeseen disturbances.

The food system is a vast, complex, and interconnected network; so where should those individual units - producers, suppliers, manufacturers, and retailers – start? According to Elliott, who advises companies and governments on building food resilience strategies, the first point of action is for each actor to identify single points of failure and cascading failures in its supply chains.

What are single points of failure and cascading failures?

In the food industry, single points of failure can arise from a high dependency on one place for ingredient supplies. China, for instance, provides 80% of the world’s garlic, Vietnam supplies around 80% of black pepper, and just one state in the US, California, dominates the supply of almonds. In the event of a shock, such as drought that leads to a crop failure, these supply chains collapse.

Single points of failure also occur for non-food commodities. In the UK, for instance, carbon dioxide is used for food processing and storage. As a by-product of the fertiliser industry, it is currently facing supply challenges because of the energy crisis, and manufacturers have been hit by shortages.

A cascading failure, on the other hand, is when one part of a very complex supply chain starts to fail, causing other parts of the supply chain to fail in turn. The result is the entire collapse of the network, said Elliott. An example of this occurred recently when, due to Russia’s invasion of Ukraine – a leading exporter of sunflower oil –, the global supply of sunflower was suddenly restricted. Food manufacturers were forced to reformulate to remove sunflower oil from their products, turning to alternatives such as rapeseed oil, soybean oil, and palm oil. However, demand for palm oil surged to such an extent that Indonesia, the world’s biggest producer, announced a ban on palm oil exports in a bid to protect its domestic supplies.

Still reeling from such shocks, many attendees at the Fi Europe 2022 trade show in Paris were focused on finding alternative ingredients to reformulate their products and, traditionally, this reactive approach has been commonplace.

Today, however, the risk of shocks is becoming so prevalent that it is necessary to establish preventative measures, learning from previous crises and building models, said Elliott.

A single point of failure with ‘a catastrophic effect’

As the global food system is so inter-connected, a single point of failure can quickly escalate into a cascading one. Elliott advises companies to identify single points of failure in their supply chains and draw up mitigation plans for each one accordingly.

“In the UK, we had a company that couldn’t produce products because they were missing one single ingredient, not in food but in their food packaging material. That’s a single point of failure that had a catastrophic effect on that company.

“You have to map out all the materials that you buy in and think what your mitigation strategies [are] if this isn’t supplied. The advice for that UK company was to source packaging ingredients from several suppliers rather than just one.”

Diversified sourcing is one of the four properties of a resilient food system, known as ABCD, identified by researchers at the Wageningen University and Research in the Netherlands. Implementing these properties will allow food industry operators to better anticipate, prevent, absorb, and adapt to the shocks they may face, said Elliott.

The four properties are agency: the means and capacity to mitigate risk and respond to shocks; buffering: resources to fall back on in the face of shocks and stressors; connectivity: the interconnection of and communication between actors and market segments; and diversity: diversity at different scales and in different places, from production to consumption and from farm level to regional diversity.

“[We] advise companies to get much more transparency about where they source their commodities from,” Elliott added. “Start to develop plans to diversify where you source ingredients from and understand the potential impacts such as fraud because you may be making your company more vulnerable to fraud. And then [start] analysing whether it is worth investing in trying to source more locally. Sourcing locally is a hugely important part of food system resilience.”